Last Saturday, as part of the simultaneous Europe-wide PEGIDA demonstrations, Tatjana Festerling spoke in Warsaw at the launch of Polish PEGIDA. Her speech, which was given in German, has been translated by Rembrandt Clancy, based on Ms. Festerling’s own English translation [pdf]. Below is a subtitled video of the speech, plus an introduction and transcript. For the sake of brevity, the pauses for the reading of the Polish translation have been edited out. 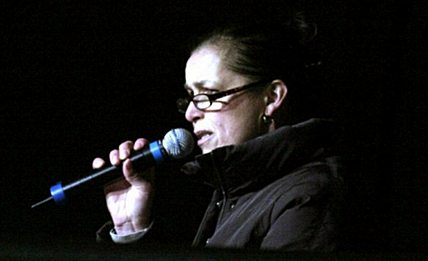 On Saturday, the 6th of February 2016 Tatjana Festerling gave a speech in Warsaw at the premiere of the first Polish Pegida. According to Politically Incorrect, there were 2,000 participants.

What follows are two press excerpts which capture the level of journalism in two of the main German online media outlets. The Frankfurter Allgemeine wrote the following about Frau Festerling’s speech:

Tatjana Festerling stands in front of the Sigismund’s Column opposite the Warsaw Castle. In Poland, the renaissance building is a symbol for the systematic destruction of the city of a million people and the plundering of Polish cultural assets by the German occupiers during the Second World War. It also stands for the reconstruction of Warsaw’s Old City after the end of the war. […] Tatjana Festerling warned, in German, of an Islamic invasion of Europe. She denounced the conquest of Europe which has allegedly already happened. After her speech is translated, a thousand Polish right-wing radicals and concerned citizens bawl back together in chorus: “Instead of immigration for jihadists, bombs for terrorists.”

A Catholic priest, who had just emerged from the nearby University Church, found nothing unusual in the scenery: “We are a democracy. Demonstrations belong to that. And it is clear that radicals on both sides have gathered here”.

Tatjana Festerling continues … her hate tirade and speaks of Angela Merkel as “the most dangerous woman in Europe”, of a “collective Stockholm syndrome in German society” as well as of “thousandfold violations of the constitution”. She warns of an alleged imminent and decisive battle against the Islamic threat facing Europe and consistently describes asylum seekers from the war zones in Syria, Iraq and Afghanistan as intruders. Her verbal images of a ‘body of the German people’ [Volkskörper, NS terminology], which is psychologically threatened by these foreigners plays on the linguistic patterns of fascism. The projection of one’s own resentments onto another religion and the sweeping rejection of the latter apply just as well for Islam today as it has for centuries against Judaism.

It was actually supposed to be a giant demonstration which the right wing, radical National Movement (RN) party called for on the collective day of action for European opponents of Islam. However, just 2,000 people gathered in the Castle Square in Warsaw. Three obviously drunk young men in hoodie sweaters bellowed: “I Islam, I Islam!” One sees shaved skulls and black bomber jackets. Also the delegation of Hooligans is there. The muscular men look grim with their covered faces.

The scepticism against Muslim immigrants is massive in Poland, even at the mid-level of the society. But when a right-wing radical party like the National Movement calls a demonstration, then it is obvious that the average citizen stays home. However, anyone present here comes from the very far Right.

That does not appear to disturb Tatjana Festerling. … She cannot be surprised in any case about the public. A co-organiser is the “All-Polish Youth”, a right wing radical youth movement. It showed what it thinks of the “West” a few weeks ago. At a demonstration in Breslau, a speaker burned a Jewish doll and a Europe-flag. … The main organisers of today’s demonstration, the National Movement, have little to do with the “West”: Their members dream of an ethnically pure Poland and as one of their goals, they put forth their wish to “abolish liberal democracy”.

Even Frau Festerling’s smile is considered suspicious as Robert Winnicki, head of the National Movement, hands her the microphone (shown in the video) before her speech begins:

Then the Pegida Front-woman comes onto the stage. Winnicki, somewhat embarrassed, gives her the microphone. He appears to not know exactly what this smirking is about.

The article continues in this vein, placing Tatjana Festerling, with her “grin”, against a backdrop of “right wing” organisations and drunken Hooligans lighting giant firecrackers and Bengal fireworks.

Tatjana Festerling’s speech begins at about 26:35.

It is my honor to speak with you in Warsaw on this day of international demonstrations against Islamisation! I bring warm greetings from Saxony to all of you.

It is necessary for me to address a few words to you today.

I speak for thousands, if not millions of Germans when I say that we are ashamed of our German politicians and our German media.

We are ashamed of their arrogance, their hubris and their interference in your national affairs.

We are ashamed of the pejorative statements of German politicians who criticize your democratically elected government and thus put the electoral will of Poles in question.

We are ashamed of the audacity of German politicians, who think they have to give, you — Poland — a lesson in democracy and freedom.

What has been built on German-Polish friendship is being destroyed by the leftist Merkel government and the German media.

We are ashamed of the vain God-players at the top of the EU, who speak seriously of wanting to put Poland under supervision!

[We are ashamed of] these smug feudalists, who sit in Brussels in their shining palaces, but do nothing against the decline of the European continent.

They show complete failure. This EU has failed. THIS EU has to be destroyed — the sooner, the better!

Friends, I assure you: German citizens DON’T think like our politicians! On the contrary — they show full respect for and recognition of Poland.

Because you have already managed the transition toward a conservative policy aligned to national interests.

We patriotic Germans are ashamed especially of our Chancellor Merkel, who has fueled the invasion of Europe by masses of Muslim men.

Every day we see the constitution violated a thousandfold through illegal immigration at our borders. But Mrs Merkel does not want to protect German borders.

But Mrs. Merkel and her fanboys protect Muslims. For Christians and Germans there is no mercy.

Churches are converted into mosques. Christians in asylum shelters are often victims of attacks and assaults by Muslims.

We have parallel societies and no-go zones into which not even the police dare to enter. Recently a stoning was prevented only at the last minute.

In many cities, women can no longer walk on the streets at night. The sex-terrorist attacks on New Years’ Eve were kept quiet for days by politicians and the press. Only when the international media reported them did the German media move. In the meantime, in Cologne alone, nearly 1,000 charges of sexual assaults have been brought.

Also the German media are practicing collective submission. Anyone who rebels and resists, as we of PEGIDA do each Monday in Dresden, is stigmatized as a Nazi and a disgrace to Germany.

Chancellor Merkel is the most dangerous woman in the world. She has given up control of the country, of the borders and probably also of herself. She just goes on. Like a stubborn, defiant child she continues her destructive path, giving the appearance of psychological problems.

Above all in Germany, the religion of the welcome-culture prevails: like mad-men young people at railway stations applaud the incoming masses of Muslim men.

It must be a collective Stockholm syndrome — women’s rights activists and even rape victims show solidarity with the perpetrators. The submission of Germans to Islam is in full swing. Germany has gone mad. Germany is an open-air psychiatric hospital.

But like Asterix and Obelix, there are small Gallic-like villages in the country, where resistance is practiced. These are people who respect freedom; educated Germans, who want to maintain the diversity of European cultures; these are Germans who are fighting for our Christian roots and our enlightened values.

There are thousands of people who have been taking to the streets with PEGIDA in Dresden every Monday for over 15 months, — who take to the streets for all of Europe.

Islamization concerns all of us in Europe. Merkel’s Muslims are in the process of conquering the continent. This time, they are not standing before the gates of Vienna; this time they are attacking us from within.

And as in the Battle of Vienna in 1683 under leadership of Jan Sobieski, Europeans must stand together again — now more than ever. At that time it was the Poles, Lithuanians, Saxons, Bavarians and Austrians who fought side by side against the Islamic invasion — and won.

Back then we were all Europeans! National differences were irrelevant then, when we were fighting TOGETHER for OUR Christian Occident.

The situation is similar today as parties, anti-Islam movements and the international PEGIDA offshoots merge into a pan-European movement — into Fortress Europe.

WE are the real Europeans — and those, who are opening the doors to Islam, they are the enemies of Europe.

Poland is not yet lost — nor are Europe and Germany.

Please dear friends, let us lead the battle against Islamization together!

Thank you so much!

8 thoughts on “Tatjana Festerling: “Germany is an Open-Air Psychiatric Hospital””