This blog popped up recently during a search for the Swedish police report — complete with maps — of the fifty-five no-go zones in Sweden.

Yes, the term was “no go zones” in the Swedish press when the police made their report and this blogger published their findings in English. But since then he had to add this update after the sudden global crack-down by the Word Police:

[Edit: To clarify, the term “no-go zones” is how the Swedish media referred to the report when it was released. The report itself does not use that wording; it talks about “…the regular justice system being disabled,” “…police being unable to perform its duties” and “…local residents considering the criminals to be the ones running the area,” with police being subjected to violence and harassment when entering. The net effect is the same, but in light of the Fox News controversy it seems prudent to point this out. It should also be made clear that this report refers to criminal gangs seizing control; the kind of shariah-ruled, muslim-only enclaves Steve Emerson was talking about in Britain and France do not exist in Sweden.]

So. They’re merely criminals in Sweden. Which simply means those gangs are relatively new, they’ve yet to organize and mature sufficiently to begin controlling their Muslim neighbors via sharia law. 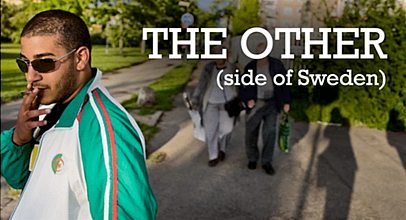 The doctrinaire crackdown will happen eventually, at least in the Muslim areas. What do you want to bet the Swedish MSM have begun erasing that phrase, “no-go zones” where they can? People who have saved their print versions of the news will have it; the Left — much like Islam — practices a robust revisionist history. It wields a practiced airbrush to good effect.

We first became aware that something was rotten in Sweden following the first Counterjihad Conference held in Brussels. The Baron had sent me materials to post, which I did. Immediately following the announcement of that event on Gates of Vienna, the proprietor of Little Green Footballs (probably being played by Belgian and Swedish black psy ops) began fulminating about the Counter Jihad movement and our questionable “associations”. This would turn out to be the start of Charles Johnson’s return to the Left. His bizarre, slow-mo meltdown was our first exposure to that now-familiar figure, a Leftist initially scared Right by 9/11, only to return to his Leftist roots once the fear wore off.

In that nightmare turmoil (at the time, the Baron was still in transit back to the US and I was trying to keep abreast of events) I noticed there was at least one brand new commenter at LGF, a troll calling himself “Dave of Sweden”. Dave’s purpose appeared to be to sit athwart the comment thread feeding huge bites of disinformation about the Sweden Democrats and their “Nazi” past. That LGF community of commenters devolved into a mob, even turning on Fjordman who’d considered them friends. It was one of the creepiest betrayals I’ve ever experienced or witnessed, but it was a watershed moment too: that’s when I learned there were no safe alliances in the intertubes. If you were a small blog willing to make a principled stand then you stood a good chance of becoming chum for the unprincipled and ambitious…

Charles Johnson was nothing if not ambitious. He also attacked another group who’d attended the Conference, the Flemish party, Vlaams Belang. In each case, the political party pushing back against immigration were hit upside the head with the oldest piece of roadkill used by the Left to smash their opponents. In other words, when cornered by your own ignorance pull out Adolf and aim. Sad and predictable… what the Baron eventually came to call “having a case of the Screaming Nazi Heeber-Jeebers”.

In the end, Chazzer became sadly irrelevant. As he swirled down the drain, bellowing at everyone and proving his loosened grip on integrity (or even on a shared reality), few came back to apologize for taking sides against us. We settled for his move away from our purview and got on with life. Eventually we were to get further lessons on this strange phenomenon of former-Lefties-reverting-to-the-Dark-Side when the attacks began on Diana West. That time, however, the experience of betrayal was no longer blindsidedly brand new nor completely dark. Having weathered Chazzer’s strange antics and the horrific scapegoating of Fjordman by Norway, by the time the set-up against Diana West occurred, blindsided surprise was no longer possible. Also, there were rays of light in that dark time imposed on Diana: many good people besides us supported her prodigious efforts to expose the deep inroads Communism had made in the U.S., corrupting politics, media, academia, etc. — all the way back to the sainted FDR.

Since discovering this American’s commentary it has become a habit to look at his take on things in guano-crazy Sweden. Today’s top post concerns the events in Denmark and what he terms “increasing Scandinavian tensions”. This (long) snipped blockquote is full of links at the original post, but I’ve not the energy to embed them here. Besides, it may whet your appetite to learn more by going over there, not only to follow up on this story but to read his other reports:

Danish police believes the gunman was targeting [Lars] Vilks, and that he was the same shooter who later attacked a synagogue killing another person. The man was killed in a gunfight with police early this morning. More details will be forthcoming during the day, but at this time everything points to the same twisted hate that set the stage for the Paris massacre.

It seems twisted hate is coming from all directions now. Just this friday, three white supremacists were arrested outside the offices of newspaper Expressen. Fortunately, police were able to intercept them before anyone was hurt, but it is widely believed the attempt was in response to an expose of prominent female figures in the shady neo-nazi underworld.

This is not to be confused with the previous smear campaign by Expressen. A crew of extreme leftists made up by convicted violent felons hacked personal information of those opposed to the open-border immigration policy, and the newspaper happily hung lots of people out to dry for their political convictions. One person is dead and many more have been severely harassed as a direct result that campaign.

That’s the same criminal group that is now providing newspaper Aftonbladet with hacked personal information for their currently running campaign against private citizens. Simply put, the tiny percentage actual racists (i.e. people of the manifestly insane idea that people of certain skin color are superior than others) are used as justification to set up huge databases of sensitive, personal information of the 98% who are not racist, but simply disagree with the current political situation.

To make matters worse, the group is openly bragging about the vast expanses of personal data they have acquired, and make no secret that they intend to use it for blackmail and public shaming. “We’re the Swedish STASI!” they happily bragged on Twitter. It’s like handing a loaded machine gun to an ape.

The justification for this blatant breach of all standards for integrity is that they have registered as a “journalistic research agency” and now make good money selling illegally obtained personal information to whoever wants to cause harm to anyone disagreeing with their leftist views. The media and the law turns a blind eye, because hey, it’s just soulless orcs deserving whatever they get.

I’m no psychologist, but I’ll go out on a limb and claim that it’s this kind of thing that drives MORE people to become radicalized. If you can’t trust authorities to shield you from invasion of privacy and even physical harm, you get angry and disillusioned. And easy bait for secretive “defense leagues” that talk about protecting you from the bad guys, but in reality is just a front for the true extreme right forces. If you keep yelling “Racist!” at people long enough, eventually some of them will step up to meet your projection.

So, besides the rapidly growing number of ISIS-returnees biding their time in Swedish sleeper cells, we have a lovely cocktail of bad stuff going on:

Sweden is rapidly turning into a pressure cooker. I fear for what will happen when the first major act of terrorism goes off here.

UPDATE: Swedish press is now blaming Vilks for the attack.

Ah, Sweden, where the by-word is niceness. A few months ago I complained in the comments about Norway only to be told by a Dane that Sweden is “worse, much worse”. I was told that when Swedes want to get out of the pressure cooker for a while, they visit Norway. OMG.

We read a lot about the ways in which one’s genetic inheritance counts for far more than culture when it comes to determining character. Does the experience of Scandinavia bear that out? Denmark wins this three-way in my book because it has stood up far better than the other two when it comes to pushing back against immigrant hostility, to EU dictates, and to anti-Semitism. Yet the Danes are a happy people with a high suicide rate and a larger debt than — gasp! — Italy. Denmark even exceeds the U.S. in its per capita carbon footprint.

It may be that the enthrallment with Nordic “soft power” is coming to an end. Still, the Danes win America’s heart repeatedly, even if Denmark’s PM spent her time at Mandela’s funeral flirting with — ugh — President Obama.

9 thoughts on “All the World’s a Play, Scene 2: “Twisted Hate in All Directions””