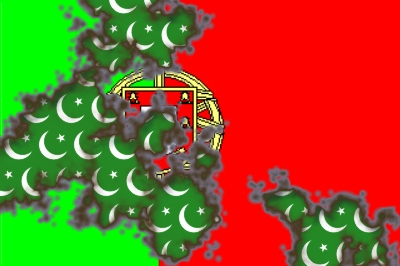 As a follow-up to yesterday’s post about a new mosque in Lisbon paid for by the Portuguese government, the following article describes the Muslim occupation of a public square in Lisbon dedicated to a martyr of the Reconquista.

Many thanks to Gary Fouse for translating this essay from the blog Totalitarismo Universalista:

Few things are more symptomatic of the state in which Portugal finds itself than to look at Martim Moniz Square in Lisbon during Ramadan. This photo was taken May 12: 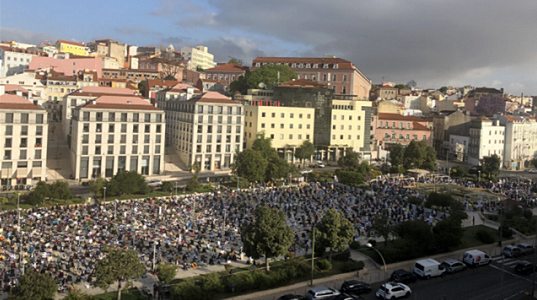 I would guess that the majority of readers of this blog must know that Martim Moniz is a martyr of the Portuguese Reconquest.

“According to legend, he was a noble knight who fought with heroism during the siege of Lisbon, on the side of Christian forces under the command of King D. Afonso Henriques (1112-1185). On seeing the opening of a door of the Moorish castle, he attacked it by himself, sacrificing his life by crossing his own body in the opening as a way of preventing its closure by the defenders. This heroic gesture allowed the gaining of time necessary for the arrival of his fellow-fighters, who thus succeeded in penetrating the castle. In his honor, this entry became known as “The door of Martim Moniz”. With this gesture, he became a glorious Christian knight.”

Now, it is so insulting that the Muslims fill precisely this square, which has the name of this martyr, to celebrate the end of their sacred month, Ramadan. Why? Because this square represents the greatest exponent of the Portuguese sacrifice against the followers of the pedophile “prophet”. To fill it with Muslims is a deliberate affront to the Portuguese, and to spit on our history and defecate on the blood shed by our ancestors, not to mention being sadly symptomatic that a majority of our compatriots don’t seem to consider this situation important.

To begin with, nobody should pray on the street, or even in the pedestrian zones of a square. The street is public; it belongs to all Portuguese, so no religious group should be able to take it over. A procession that courses along the streets is one thing, another thing is for a group of persons who belong to a religious group to deliberately and consciously block a street/square for long periods of time, in the clear attempt to impose on or intimidate non-believers.

These types shouldn’t even be in Portugal, but once they are, they should opt for Avenida Alvara Cinhal, or for Avenida Mario Soares, or for a street/square of some other stateless scoundrel of that genre. In no circumstance should Muslims be able to take over Martim Moniz Square for religious purposes. To accept their presence in that space is not to be tolerated, much less virtuous… and simply to be defeated.

6 thoughts on “Besmirching the Memory of Martim Moniz”