As a follow-up to last night’s posted videos, here are all the cultural enrichment articles that have accumulated in my to-do folder over the last few days.

First, from PolitikStube, an op-ed by Alice Weidel of the AfD (Alternative für Deutschland, Alternative for Germany). Many thanks to Hellequin GB for the translation:

Alice Weidel: The Lower Saxony State Social Court has for all intents and purposes abolished the laws against the entry of migrants who are already registered in another EU member state. In a judgment it stated that those “refugees” who live in precarious conditions in an EU country may receive full social benefits in Germany. So for those who, in their opinion, receive too few social benefits in Italy, Spain or Greece, the court has opened wide the door to Germany.

The court also found that Germany’s interests in migration policy had to take a back seat. In other words, it has denied our state the right to control migration according to established criteria.

This verdict is a domino-effect scandal. Germany, whose social benefits acted like a magnet before, is now becoming a chosen migration destination even more often. In addition, there is family reunification, the conditions of which have now been eroded to such an extent that proof of kinship no longer has to be provided.

The legislature must finally act. Germany can no longer be seen as a richly-laid table for all those wishing to enter the country. Our resources are finite. Future generations will have to foot the bill for judgments like the one from Lower Saxony. The federal government must finally react and limit migration!

The second article is from Sweden. It reports on gang violence against a court trial by “youths” in a suburb north of Stockholm. Many thanks to Gary Fouse for translating this article from Samhällsnytt:

At about 9 in the morning, a gang of upwards of twenty masked young men, linked to the criminal gang groups, X-Team, Bandidos, and Bredängs Network, attacked the court building in Attunda with powerful bomb-like pyrotechnic pieces, so-called bangers. These were also thrown at police who were brought in to guard the trial and at the reinforcements who arrived at the scene after the attack began.

About ten of those involved were taken into custody by police. It is not clear if they were subsequently held in detention or released on the spot. Only after lunchtime did the police gain control of the situation.

The gang-related trial, where four men are accused of planning murder at a children’s party, was earlier transferred from Södertörn District Court due to similar violent incidents with some eighty people involved.

The Attunda District Court specifically has a security room. However, even in the new courtrooms, proceedings cannot be conducted in legal order.

The main proceeding consists of several trial days, of which this was one.

The third article, from Germany, was translated by Hellequin GB:

Wicked! Family of asylum seekers required to leave the country — Muslim mother invented rape of her daughter (4) in daycare

Many rejected asylum seekers are not lacking in a wealth of ideas to prevent deportation or simply to ignore a voluntary departure. The trickery ranges from rioting, threats including biting and spitting attacks, inventions of illnesses (especially psychological ones) to threatening to leap from the roof. Lying, deceiving, playing for time and hoping it will pass and you can stay as intended.

An absolutely despicable case occurred in Koblenz last year. A family unsuccessfully applied for asylum and is obliged to leave the country. The last lifeline for staying in German paradise is a pitiful lie dished out by the Muslim mother that her daughter (4) was raped in the Kita [daycare].

The claim is fictitious, the victim is the only educator at the daycare center, his story of suffering ranges from criminal charges to death threats and illness to occupational disability. A life or professional life destroyed because of a perverse deception, that of alleged protection-seekers who are not even allowed to be here and who abuse the right of asylum to immigrate.

The family of asylum seekers seems to have disappeared in the meantime. They have nothing to fear, as no investigations have been initiated. Surely it can’t be that the Muslim mother will get away with it? 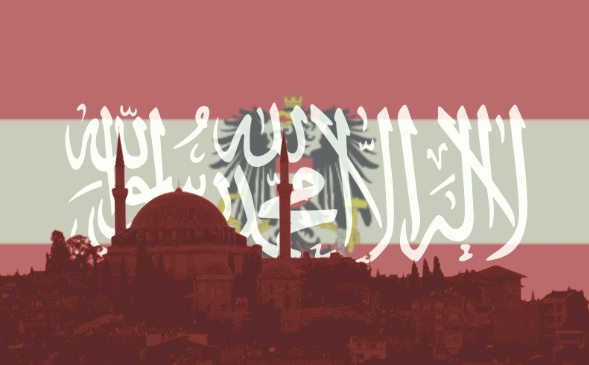 From Austria, a report on culture-enriching violence against women, translated by Gary Fouse:

FPÖ [Freiheitliche Partei Österreichs, Austrian Freedom Party] outcry against murder of women: The majority of perpetrators are foreigners — Violence is being imported!

Today, Wednesday, the FPÖ, in the course of a press conference on the murder of women in Austria, took a position and criticized the federal government’s measures, which are fundamentally plagiarized. That is because when the FPÖ was in the government, the measures in this regard were set out, but not followed through on afterwards, however. It was also pointed out that a good portion of the violence against women was being imported from abroad.

General Secretary Michael Schnedlitz recalled that the Black-Green coalition had thematically plagiarized themselves. Measures such as an online Protection Against Violence summit and a campaign against violence against women had already been anchored in a Council of Ministers decision from December 9, 2020.

Consequently, only old announcements are warmed over. There has already been a “roundtable” on this. “You cannot solve problems like this when you plagiarize yourselves,” says Schnedlitz. And he recalled that under the then-Liberal Interior Minister Herbert Kickl, a screening group was established, which specialized in violence against women. “What became of this group?” asks Schnedlitz. There was also a “Criminal Law Task Force” under the Black-Blue Government at the beginning of 2018, led by then-State Secretary Karoline Edstadtler (ÖVP [Austrian People’s Party]). “Why haven’t the media since then asked whatever happened to the implementation?” Schnedlitz also wonders.

The General Secretary also maintains that under Kickl, the extension of the entry ban to include a ban on approaching was implemented through a decision of the National Council. And Schnedlitz also holds the Justice Ministry, the Education Ministry, the Women’s Ministry as well as the Foreign Ministry responsible, that all the measures are awaiting implementation.

For example, education for students was promised, an offer of advice against violence in the name of “honor”, or also the assurance that women could access women’s shelters in other federal states. “The federal government has made announcements for years, but does not act. The ÖVP is the prototype for political obstinacy. Women finally expect clear actions,” says Schnedlitz.

I did nothing. Just killed my wife

With shock, FPÖ women’s spokesperson Rosa Ecker cites the words of the murderer of a woman. “I have done nothing, just killed my wife.” She enumerates this year’s murders of women and states that four of the perpetrators were Austrian; five were migrants, especially Muslims. “It stands out that more than half of the perpetrators and victims are foreigners. The men who are born here have no problem with the gender role models that we live with,” says Ecker. There are certainly problems with immigrants who want to establish an image of women based on the Islamic social circle. Violence is frequently imported.

Several proceedings of violence against partners have been dropped. The €210 million for its own advertising budget, which the federal government has at its disposal, would better be used for measures for the protection of women. More money is needed for new facilities and psychological support. “To react with tears is hypocrisy or a bad conscience,” says Ecker. She recalls that FPÖ proposals against forced marriages or genital mutilations were voted down in the Parliament by the Black-Green coalition.

“Many women live in fear in their own homes; the tormentor lurks within their own four walls,” says FPÖ family spokesperson Edith Mühlberghuber. And she also mentioned children in those families, who experience violence. In addition, the length of the “lockdown” against the Corona pandemic, and the resulting financial tensions, further sharpen the propensity for violence of many of those concerned. 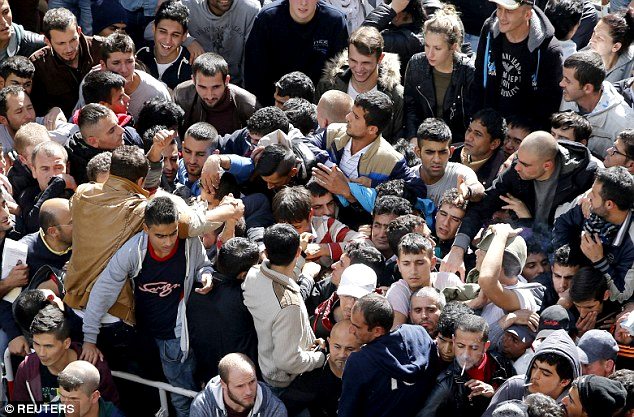 From Germany, the latest deportation news, translated by Hellequin GB:

Monkey Business! Because of the “security situation”: deportation flight to Afghanistan cancelled

A deportation flight to Afghanistan planned for Tuesday has been cancelled due to the dramatic deterioration in the security situation in the country. The risk for the escort of German police officers is too high, so the flying visit is not sufficiently safe — allegedly because of logistical problems.

What a monkey business surrounding two or three dozen rejected asylum seekers, mostly criminals. There is room for at least 200 people in one aircraft, but the company of doctors, pastors and police officers probably need the most seats. And this is what the federal government’s terrific achievement looks like: in six years, a phenomenal 1,035 men have been deported to Afghanistan, while thousands are pouring into Germany again.

The majority of Afghans who entered illegally have all traveled thousands of kilometers and crossed dozens of safe countries. What you managed on the way here should also apply on the way back, shouldn’t it?

Welt.de: The federal government has cancelled a deportation flight to Afghanistan planned for Tuesday. A spokeswoman for the Federal Ministry of the Interior said on Monday that the “return measure” had been postponed. She referred to “logistical” problems caused by increased security measures in Kabul. The decisive factor for the decision was therefore not the danger for the migrants, but for the German police officers accompanying them. 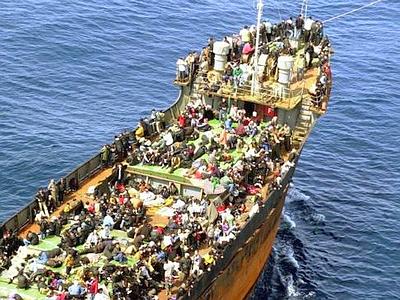 Finally, a report on the latest “rescues” in the Mediterranean by migrant-ferry NGOs, translated by Hellequin GB:

Non-stop arrivals in Sicily: More than 800 illegals in a few hours — Sea-Watch 4 brings another 455

Landing after landing, an unstoppable wave. More than 800 in the past few hours. After a weather-related calm in the last few days, the crossings in the central Mediterranean have been resumed. The “rescue” work has been going on without interruption since Thursday. After the 532 immigrants went ashore in the space of a few hours last Friday evening, the harbor master’s office and Guardia di Finanza intercepted more boats with illegal immigrants. The balance was just under 800 illegal entries yesterday evening.

This morning, all over again: Alarm Phone, the volunteer switchboard that collects calls for help from the Mediterranean, launched the SOS on Twitter for a boat with 95 people on board that is “in great danger in international waters”, while the Sea Watch — after yesterday afternoon the Ocean Viking, the ship chartered by the French SOS Méditerranée — unloaded 236 immigrants in the port of Augusta, asked for “a safe haven” to accommodate another 455. Numbers that give a good impression of the contours of an explosive situation. So much so that yesterday evening the Under-Secretary of State for the Interior Ministry, Nicola Molteni, asked Prime Minister Mario Draghi for an “immediate confrontation” in order to pursue a defensive strategy as soon as possible.

If the landings continue at the same pace as this weekend, all the centers in Sicily will soon be in trouble and the Ministry of the Interior will be forced to move the illegal immigrants to other regions. “This situation is unacceptable,” Matteo Salvini thundered on Facebook after writing to Draghi and the Ministers of Health and Home Affairs, Roberto Speranza and Luciana Lamorgese, to get the situation under control before it is too late. “In addition to checking who arrives by plane from endangered countries, including for Covid and variants,” he wrote, “it is also right to block barges out of respect for the Italians, the victims, their health and safety.”

8 thoughts on “A Medley of Cultural Enrichment, Text Edition”