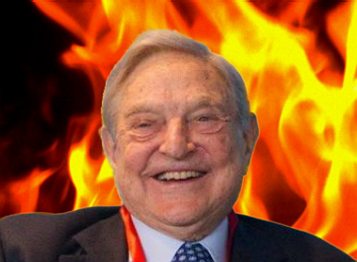 The following thoughtful essay by the Hungarian writer Demeter Szilárd was immediately deleted almost everywhere it appeared. After 24 hours of publication the author was forced to delete his Facebook account.

Vadhajtasok.hu has preserved the original article. Many thanks to CrossWare for the translation:

Soros: A Man with a Mission

I observe quite a few artists and intellectuals nearing to the end of their lives and looking back to their oeuvre, perceiving that they have been judged in the balance and found wanting; just moments after their deaths they would be forgotten — even by their biographers. Somehow, I can understand the frustration of these people. They have made bad choices and are now facing the consequences. Everybody is living their own lives, but — what is more important — as philosophers have said: everybody will die their own deaths.

Presumably George Soros is struggling with the same feelings. Just before the end of his life, he was hit by the truth of the commonplace wisdom: money does not bring happiness. One cannot bring his money with him to the opposite side of the river. The financial security of his family had been established long ago for several generations to come, so only one question remains for him: what will happen to George Soros once he ceases to exist? He is not talented as a writer; his philosophy is troubled and inconsistent. He is, however, smart enough to realize he is not a genius. This might be his greatest grief.

He is moving his chess pieces on a global chessboard. Given that the key to his financial success is playing unfairly, no wonder he also keeps changing the rules in his assumed “world-saving” chess game to his own taste. He is the playmaker, the referee, the striker and the scoreboard clerk in one person.

We have seen enough of this type in the history of mankind. Those with enough money and power made themselves dictators; those lacking it, servants of the dictators. And all of them — without exception — wanted to reach the throne of eternity by climbing a mountain of the corpses of the victims of their own tyranny.

In today’s world, the path to the throne of Soros leads across our very bodies. Europe has became the gas chamber of George Soros. The toxic gas is flowing from the capsule of the “multicultural open society”, lethal to the European way of life, and we, the peoples of Europe are doomed to fight for the last gasps of breathable air treading and climbing over one another’s bodies.

These Liber-Aryans are now aiming to exclude us Poles and Hungarians from the one last political community where we still have rights. We are the new Jews. Call it the “open society”, “rule of law” or “solidarity” — these are all just code words for the same ideological bludgeon, and are used as instruments for the deprivation of our rights. When they question the will and ability of Hungarian and Polish voters to choose their own way of life or elect their own political leaders, they are essentially saying that we have big noses, we stink and we are lousy. We are deemed “inferior creatures” by them. Believe me, practically speaking this is what they think of Central and Eastern Europe, all “E-European” nations.

They are topping their aforementioned behaviour of good old supremacy and colonization with a nebulous utopia. Because of the situation not being any better in their Western countries than in ours, Liber-Aryans are fighting their own battle: their fêted cult of “embracing diversity” is attacking our right to be ourselves. Anyone they cannot re-educate into a “multicultural person” is in their crosshairs. It sounds better than Übermensch, but it is fundamentally the same concept.

George Soros is the liberal Führer. And his Liber-Aryan army worships him in an even more servile manner than Hitler’s worshipped him, back in the day.

They have learnt nothing from the 20th century.

34 thoughts on “Soros: A Man with a Mission”