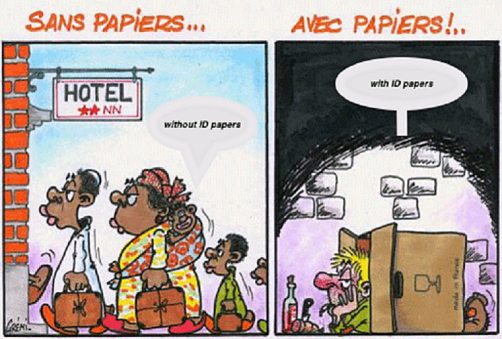 In a follow-up to last night’s video of a migrant-loving French politician, Oz-Rita sends her translation of this brief editorial from Riposte Laïque:

In Paris, thousands of illegal immigrants are defying France: out with them!

All the rot of this regime was made apparent this past Saturday, May 30, in the streets of Paris. 5,500 illegal Africans, with total impunity, despite the prohibition of a demonstration, supported by 195 parties, associations, unions of the Left, were able to demonstrate without the slightest problem from the Opera House to the Place de la République.

The French had a new confirmation that this regime only repressed the Gauls, and left total freedom to the inhabitants of the Islamic districts and the African invaders.

This government of criminals confirms, in the eyes of all, its contempt for the French and its preference for foreigners, at a time when our country is ruined, and when Macron evokes, for the first time, a European tax to pay for the crisis… and immigration.

With true patriotic leaders, the only possible response to this kind of situation can be summed up in one word: get out!

6 thoughts on “Out With Them!”