Mass alien immigration from the Third World into the First and the social and cultural decomposition that followed is now a fait accompli. This same aggressive war on our way of life is also being fought on another front by other means and by members of the same cabal. They plan to control the ways and means that determine the state of human health on a global scale — aided and abetted by the UN and the WHO, naturally — and through that monopoly to eventually control the world itself. They are the wealthy, politically well-connected and anointed disciples of Mammon who are shaping an autocratic global future controlled exclusively by them and for their benefit alone, not for ours.

If by the time you have finished reading this article and, most important of all, watching the video, you are not frightened by thoughts of what the future holds then so be it. If, however, you can see and understand how the globalist plan is unfolding and it is not what you wish for the future of your children and grandchildren then it is time for some serious preparation and then action.

But before preparation, first must come a full understanding of who the enemy is, his methodology and how he operates as an international distributed network with tentacles stretching into every corner of our lives, and finances and thus what his ultimate destination is.

“The social atmosphere is that of a besieged city. And at the same time the consciousness of being at war, and therefore in danger, makes the handing-over of all power to a small caste seem the natural, unavoidable condition of survival.”

A short review of the revelatory video…

The video is 38 fascinating minutes in length. Below are seven snapshots of some of the graphics found therein. In the video there are many more accompanied by full explanations of the lineages and interconnections between the principal players. 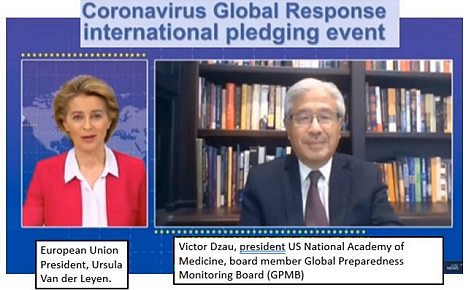 This ‘Pledging Event’ lasted two and half hours. Always follow the money — as the video does. 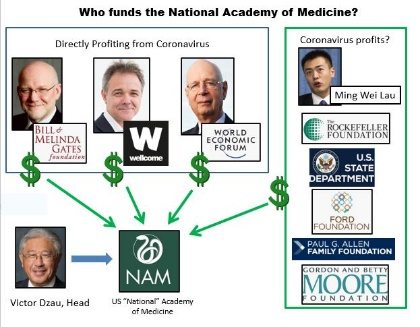 The web of conspiracy starts to develop. 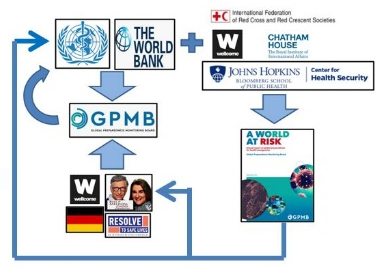 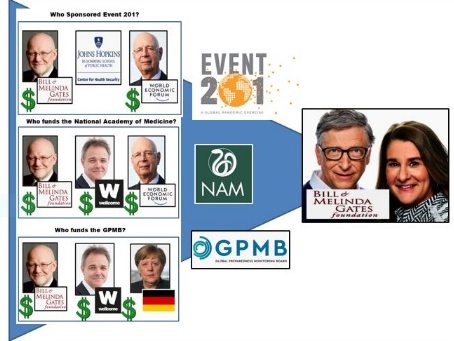 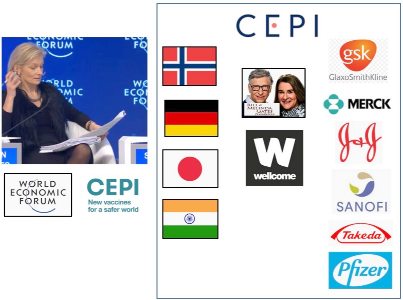 …and more, including Big Pharma. Now, there’s a surprise. 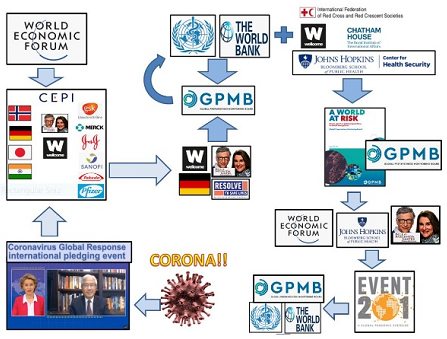 Covid makes a first, but not last, appearance. 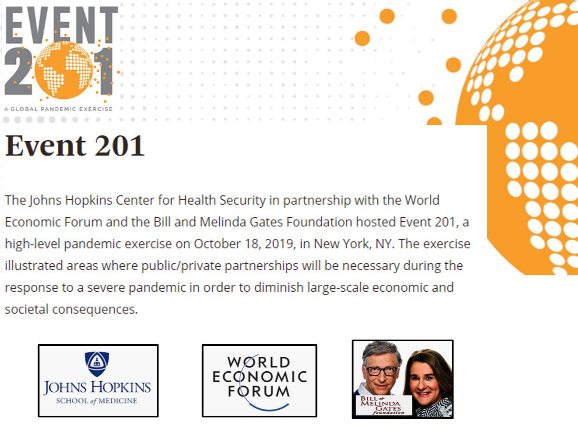 And with the advent of Event 201, attendance at which Bill Gates at first denied, the conspiracy starts to take on a precise shape.

The creator and narrator of the video lives in Canada, Soy-Boy Trudeau’s Sino-Globalist Puppet State, and I find it encouraging that the flames of truth and freedom still burn everywhere in the West despite unremitting censorship and persecution.

In all this is a remarkable piece of investigative journalism, soundly researched and acutely analyzed. Thank you, Polly, for providing me with copies of your original graphics as well as your permission to reproduce them as I so choose.

[N.B. — A link to the full BitChute version of the video can be found here, and I recommend it without equivocation — it is an eye-opening revelation in this time of Covid hysteria, lock-downs (psychological conditioning), police state controls and the consequent economic destruction and then retrograde social re-engineering of the West through endless iterations which ‘reductiones ad insulsitas’.]

I have not forgotten those other minor prime movers within the global conspiracy who have been operating effectively in the UK, Professor Neil ‘Bonking’ Ferguson and his perambulating ICL leg over, and I will be dealing with them in a later article.

However, at this point it is worth bearing in mind that Antonia Staats is a hard-left fist inside a velvet glove who works as a senior campaigner on climate change for the Imperial College London element of the online network Avaaz, another global player which is also connected to the Bill and Melissa Gates Foundation through the World Economic Forum.

Avaaz is a huge and influential online US organization, also with tentacles reaching into many places including the infantile minds of that destructive collection of loony tunes known as Extinction Rebellion. There are no indications that it has any connections to St. Greta of Poobucket’s controllers, but that is a distinct possibility and cannot be ignored. Also, the Cabal certainly has delegate status of one kind or another at the annual Davos luxury bean feast.

— Seneca III, this thirteenth day of May in the year of our Lord 2020

39 thoughts on “Signs and Portents Everywhere… But of What? (Interlude IB)”