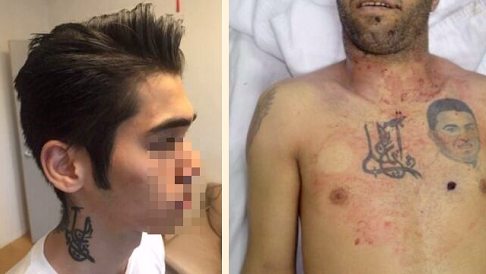 By now just about everybody in the world is aware of the case of A$AP Rocky, an American rapper who (along with his entourage) allegedly beat up an Afghan culture-enricher while on tour in Sweden. Mr. Rocky is currently languishing in a Swedish jail, awaiting trial. His case drew massive international attention after President Trump tweeted his support of the rapper.

Swedish investigative reporters have now uncovered a possible jihad angle to the A$AP Rocky case. Many thanks to Tania Groth for translating this article from Samhällsnytt:

Information has emerged about the Afghan man suspected of being beaten by the hip-hop artist A$AP Rocky and his companions. Among other things, the migrant has a tattoo on his neck that is said to pay tribute to Islamist terrorism.

The interrogation shows, among other things, that the 19-year-old man, according to his own testimony, followed the rap partner and that he believes this was the cause of his anger.

It also appears that the man immigrated to Sweden from Iran as a so-called unaccompanied refugee child with the stated age of 14, and that he is now going to travel on vacation to the country he fled from.

In the public debate, Iran has been described by the actors who are fighting for the right of all “unaccompanied” to stay in Sweden as deadly for Afghans to return to. One of these actors is Omid Mahmoudi, founder and chairman of the “group for unaccompanied minors”.

In 2016 Mahmoudi participated in the UR Contemporary to tell about his migrant journey from Afghanistan to Sweden. He stated, among other things, that Iran’s border guards execute refugees at their border; otherwise they risk up to five years in prison.

Since he immigrated to Sweden, the man has occupied himself by committing several crimes. He appears in the criminal register in two cases of drug-related crime. Furthermore, he was sentenced to youth service for 30 days for assault and shoplifting.]

The Afghan man in ambulance after the fracas. Photo: Police]

The police investigation also shows that the Afghan man is wearing a tattoo in the form of an Islamic symbol. According to Expressen, who refers to the expert, it says Ya Ali, and means Oh Ali.

It is said to be a tribute to the Prophet Muhammad’s brother-in-law Ali, who was the fourth imam of the Muslims after Mohammed’s death. Shia Muslims see Ali as just as important as the Prophet himself.]

Expert: “Has a relationship with the groups or cherishes their ideology highly”

The tattoo even depicts an AK-47 automatic rifle. Expressen has spoken to Philip Smyth at The Washington Institute For Near East Policy who links the tattoo to several terrorist organizations, including Hezbollah, which means “The Party of God.”

The organization has its base in Lebanon, but has strong links with Iran. They have also committed terrorist acts in other places, including against Jewish targets in Argentina. Furthermore, Hezbollah is identified as a terrorist group by the EU and the United States, among others.

“It is clear that this person either has a relationship with these groups or he or she cares very much about their ideology and thinking,” concludes Phillip Smyth.

Samhällsnytt (Community News) shows a picture that allegedly represents a dead terrorist with links to Hezbollah. On the man’s body, the body bears the same kind of tattoo as the Afghan carries on his neck. An image that the debater Erik van der Heeg highlighted on Facebook.

The Afghan man’s helper: “It’s just something they find fun”

Expressen has also spoken to the Afghan man’s helper Tommi Nilsson. He dismisses the idea that his client might have links to Islamism, despite the neck tattoo.

“I think it is utterly specious. This guy we are talking about doesn’t have those connections. He has never spoken in those terms. And there are several of these young people who also have that same tattoo. They probably just think it’s something fun to do.”

The trial begins on Tuesday.

10 thoughts on “Did A$AP Rocky Beat Up a Mujahid?”