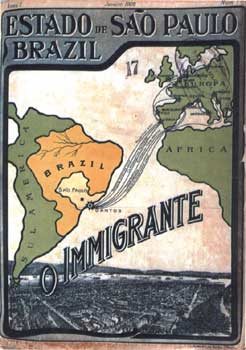 This article deals with the situation of the Islamization of Brazil in light of the new Law of Immigration, approved by the country’s Senate and sent for presidential signing. It highlights steps that have been taken to increase the nonexistent Islamic presence in Brazil into become an influential power. To understand the situation one needs to understand the deterioration of the political landscape of the country, which is briefly discussed in the course of the article (keeping in mind that politics in Brazil has a huge complicating factor: endemic corruption).

During an Islamic conference in Chicago in 2008 I heard the audio of a speech from an Imam in which he described how Brazil would become an Islamic nation within 50 years. I was aware of what was happening in the West but I thought that Brazil would not be in the axis of Islamic interest. I was wrong. After all, Brazil is the powerhouse of South America not just due to the size of the country (remember, Brazil is larger than the US without Alaska) but also due to the size of its economy and influence. It is said that where Brazil goes so goes South America. Indeed.

In 1964 a democratic but USSR-leaning government was overthrown by the Brazilian military under the pretext of keeping Brazil from becoming a “New Cuba.” The military regime remained in power, relinquishing it slowly under pressure from a democratic front that encompassed politicians, civil society and the Brazilian Roman Catholic bishops, most of them adherents of the Liberation Theology. During this time communist-style guerrilla warfare took place and several of the guerrilla leaders ended up deported, mostly to Chile (under Allende), Cuba or France. In 1988, a new Constitution was promulgated and in 1989 presidential elections were held. The guerrilla leaders returned to the country under an amnesty law and joined a number of pro-Socialist parties. The most notable of them was the Labor Party (PT), led by the union leader Lula da Silva, who was compared by many to Lech Walesa and Václav Havel. The difference is that unlike Walesa and Havel, Lula wanted Socialism and Globalism.

The new civilian regime reached its apex during the presidency of Fernando Cardoso (1995-2003), of the also Left-leaning Social Democrats (PSDB). He controlled inflation and led the country to phenomenal growth, even though under accusations of rampant corruption. Lula da Silva was elected in 2003, remaining in power until 2011. He used the economic legacy of his predecessor, creating his own corruption base in an attempt to solidify power. His goal was to keep the Labor Party in permanent control of the Federal Government. He was followed by Dilma Roussef in 2012, but the economy did not survive 8 years of Lula da Silva and corruption that reached unprecedented levels. The corruption was made public by a few young and courageous judges in what has been know as Operation Car Wash. Dilma Roussef was impeached, being replaced by her vice-president, Michel Temer.

It should be mentioned that since Fernando Cardoso’s presidency, Brazil has turned towards the Left and several former guerrilla members have become Ministers of State. It continues up to today under the current president.

Then enters the unholy alliance between the Left and Islam, Brazilian style.

Most of the Left in Brazil is anti-Semitic, anti-Israel and Pro-Palestinian. Add to the equation the inherent animosity against the USA (accused of helping the military in 1964) and the overthrow of Saddam Hussein and al-Khadafi, as well as their sympathy for Iran, and you have open doors for any Islamic leader to the high echelons of power.

Since the late 1990s there has been a growing presence of Saudi and UAE support for an exponential effort in building mosques and madrassas, even though the number of Muslims remains small (official records mention fewer than 100,000 whereas Islamic leaders mention two million).

There has been also an increase in the number of visits by Islamic leaders of any kind to government officials at state, municipal and federal levels. There has also been increasing activity dealing with public safety, including the arrest of several Muslims accused of terror plots, as well as increasing activity of Hezbollah in connection with organized crime.

But Islam has not made an impact on the local population as its leaders would like. The only way for a faster growth is by fostering Muslim immigration to Brazil. There has been a concerted effort linking government officials, NGOs (e.g., funded by the likes of George Soros’ Open Society Foundation and the Ford Foundation), Christian groups and Islamic leaders to open the doors for more immigrants and refugees. The halal industry is a door, but not to import enough Muslims. Meet the new Law of Immigration.

Senator Aloysio Nunes, himself a former guerrilla fighter, now Minister of Foreign Affairs, is the author of this legislation that, among other things, destroys the borders of the country. The main intention of the Brazilian Left is the “continental integration”, i.e., that South America becomes a single Socialist entity (they have Venezuela as a model, seriously). So, the new legislation targets primarily the free transit of foreigners from bordering countries, giving them full citizenship rights. But anyone who comes to Brazil, even as tourist, can claim the same. The doors are open to anyone, from anywhere.

This law, in practical terms, leaves Brazilian migration policy in the hands of international organizations (for example, the UN and The Union of South American Nations [UNASUR]), without limiting the number of immigrants coming to Brazil. As the Minister of Justice said: there may be one thousand, ten thousand, one hundred thousand per year, everyone is welcome. It turns out that Brazil cannot provide for its people, with tens of millions living in poverty; how will it provide for “one hundred thousand refugees per year”?

This law guarantees that foreigners — anyone who wants to stay in Brazil — will have access to all services — public health services, welfare — as if they were Brazilians. But Brazil is not Sweden nor Germany. Who will pay this bill?

Visitors (tourists) are considered immigrants, with all rights, they just need to say so.

Foreigners are allowed to form political parties and trade unions. Who will they represent? Are they committed to the public common good or to external forces and entities?

The law allows the creation of “common spaces”. In this way several enclaves of foreigners will be created in the Brazilian territory. No-go zones, anyone?

By creating a borderless country, this law makes it more difficult to fight drug and arms trafficking, which is already a big problem. The control of criminals is compromised, because the law allows for the “non-criminalization of immigration”, ignoring the fact that illegal or dangerous immigrants and tourists exist!

Brazil is facing confrontations of the worst kind. A crisis of confidence, a moral crisis, an economic crisis, lack of employment with tens of millions of unemployed people, an overloading of social security, a serious crisis in its public health system, and an excessive tax burden that hampers economic prosperity. There are 60,000 murders per year, 38,000 rapes, and 7.6 million illegal weapons crossing our borders, and an undisputed level of power for organized crime and drug traffickers.

Laws that allow a world without borders have failed in Europe. We need to be honest and realistic. Humanitarian discourse will not survive the lack of employment, the prejudice that will arise in the melee of disputes for bread, medicine, crumbs thrown to the wind, and this law comes with wrong values, without looking at what is inside the door. To open our doors to the unknown world is to close the door to a life worthy of Brazilians.

Before proposing a law to accept hundreds of thousands of refugees and immigrants without controls and boundaries, our representatives should understand that any absorption of migration can only be made by those who have the conditions and under the criteria on which these conditions are sustained. But it seems that our representatives are no better than the European ones.

Just one last thing. The mayor of São Paulo, João Dória, a Social Democrat, is selling municipal assets under the excuse that he wants to improve services. Where did he go to advertise them? To the Gulf countries. He is a strong presidential candidate for the elections next year. The prospects are not good.

This article was written for VladTepes blog.

12 thoughts on “Welcoming the Caliphate to Brazil”