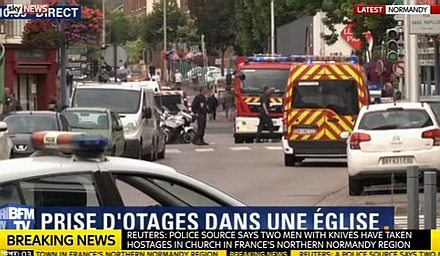 By now you’ve all heard about this morning’s events in Normandy. It’s probably been several hundred years since the Hosts of Mohammed last entered a church and desecrated the altar while murdering a priest. In Europe, that is — south of Palermo and east of Thessalonica such incidents are routine daily occurrences. Especially since the United States government, in its infinite wisdom, connived with Islamic zealots to unseat the Middle Eastern despots who had hitherto protected their Christian minorities from Islamic mobs.

There are plenty of news stories out there about the murder of the priest in Saint-Etienne-du-Rouvray. See:

All the reports say that the attackers slit the priest’s throat, but it is rumored that he was actually beheaded. I haven’t yet seen a witness quoted to that effect, but it seems plausible that the witnesses and/or the authorities glossed over the grisly fact by saying his throat was slit.

Islamist Knifemen Forced Priest, 84, To Kneel and Filmed His Death as They Slit His Throat

The ISIS knifemen who stormed into a church in Normandy filmed themselves butchering an elderly priest after forcing him to kneel at the altar, it has emerged.

The 84-year-old priest, named as Jacques Hamel, had his throat cut while a nun is critically injured in hospital following the raid which saw five people held hostage by ISIS assailants shouting ‘Allahu Akbar’.

The two killers were ‘neutralised’ by marksmen as they emerged from the building, which is being checked for booby-traps. French president Francois Hollande said the country is ‘at war’ with ISIS while the terror group has claimed responsibility for the killing.

One of the men who stormed into the church in Saint-Etienne-du-Rouvray near Rouen during mass was a local man, who was being monitored by electronic tag after being jailed for trying to join fanatics in Syria.

This afternoon it emerged that the murdered clergyman was deputising while the parish priest was on holiday. French authorities say they have arrested a third man in connection with the attack.

It comes as it emerged that the building was one of a number of Catholic churches on a terrorist ‘hit list’ found on a suspected ISIS extremist last April.

There are also reports that one of the attackers was a local resident who was under electronic tag surveillance having been jailed in France for trying to travel to Syria in 2015. His bail terms allowed him to be unsupervised between 8.30am and 12.30pm – the attack happened between 9am and 11am.

Quotes from several prominent figures are worth deconstructing. First, from President François Hollande:

Mr Hollande called for unity between French Catholics and members of other communities, and announced he will meet leaders of a range of faiths on Wednesday.

Mr. Hollande wants unity with “other” communities, but what might those communities be? Is he talking about France’s atheist community, which is probably the country’s largest faith group? Unless it has been surpassed by Islam, of course.

Or was he thinking of the dwindling community of Jews, who are departing France at an accelerating pace?

No, we all know the president meant Muslims. Between 10% and 15% of the French population is Muslim, and most of them are observant, unlike the nominally Catholic majority. So when he meets with a “range of faiths” tomorrow, it will mean some bishops and archbishops, a few Protestant clergy, some prominent imams, and a rabbi or two thrown in to leaven the interfaith loaf. The imams will assure the assembled dignitaries that the criminals who committed these despicable acts do not represent Islam, and are not really Muslims at all. Mr. Hollande and every other leader present will repeat these assertions into various microphones at the end of the conclave.

But they all know it’s a lie. From the president on down through all the mayors and prefects to the lowliest Jacques in the street, everyone knows these statements are utterly mendacious. The bishops know it, the pastors know it, the rabbis know it, and above all the imams know it. That last group is collectively responsible for the confabulation; it’s their religious duty.

So there will be no “unity” in France, not so long as Islam infests the country. There will only be an increasing level of violence, slaughter, rape, and mayhem until the native French awaken to what’s happening — or France joins the Ummah, whichever comes first.

His Holiness Pope Francis also made some solemn remarks about the atrocity:

In a statement, the Vatican said Pope Francis shares the ‘sorrow and horror’ felt over the incident, adding: ‘We are particularly struck because this horrible violence has occurred in a church — a sacred place where we pronounce God’s love — with the barbaric murder of a priest and worshippers affected.’

So he is “struck because this horrible violence has occurred in a church” — does that mean he would be less horrified if it had happened on the street outside? Or in a discotheque down the street? Or on the promenade in Nice?

As a matter of fact, that church was a “sacred place” for Islam, too, but for different reasons. Distasteful as it may seem, the mujahideen were performing a sacrament at that altar: the slaughter of unbelievers in the name of Allah. By spilling infidel blood there, they deconsecrated the church as a place of Christian worship and re-consecrated it as a blood-soaked shrine to their demonic idol.

But don’t expect the Interfaith Pope to discuss unpleasant facts like this. He’s got more important things to do, such as proclaiming the unity of “Abrahamic faiths”.

Finally, look at what the archbishop said:

The Archbishop of Rouen Dominique Lebrun, who cut short a visit to Poland to return to his diocese and was due to meet Mr Hollande on Tuesday evening, said: ‘I cry to God with all men of good will. The only arms which the Catholic Church can take up are prayer and brotherhood between men.’

Well, that clarifies matters, then: the Church acknowledges no means of defense beyond prayer.

We’ve put those nasty Crusades behind us at last! Never again will a sword be raised to protect the lives of Christians!

So, after the next slaughter by the forces of the Great Jihad, surviving Christians will gather in prayer to forgive the agents of their slaughter. And after the following one, an even greater outpouring of heartfelt prayers will be heard. And so on, massacre after massacre, until the last Christian prays at the last altar of the last church in Christendom while the scimitar is drawn across his throat.

Such is Modern Multicultural Christianity.

What passing-bells for these who die as cattle?
Only the monstrous anger of the guns.
Only the stuttering rifles’ rapid rattle
Can patter out their hasty orisons.

51 thoughts on “Jihad Slaughter at the Church Altar”