Sonia Bailley has written a piece for Vlad Tepes about the Islamic significance of Thursday, June 23rd, the 17th day of Ramadan. See the post at Vlad’s place for notes, plus more examples of the hijinks that Muslims have gotten up to in the past on this wonderful, peaceful holy day in the Islamic calendar. 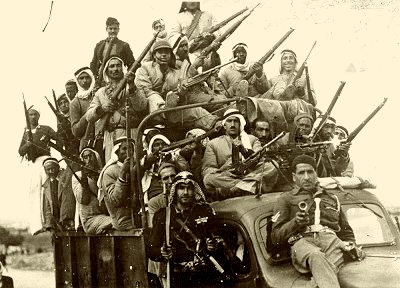 If ever there was a date to be remembered and commemorated in Islam, it’s the 17th of Ramadan. This year it falls on Thursday, June 23rd, beginning Wednesday evening at sundown — same day as Brexit.

This date holds great military and spiritual significance within Islam, as it was on this day that the greatest and most significant battle in Islamic history took place: the Battle and Victory of Badr in 624 AD (about 150 miles south of Medina), in which 313 Muslims defeated 1,000 non-Muslims from the Koresh tribe of Mecca who just wanted to return home safely from Syria with their trade caravans.

This battle marked the first significant military victory for Islam, which solidified Mohammed’s position as ruler of the first Islamic State in Medina.

It was a spiritual victory as well. The Koran (8:11-18) discusses how Allah sent blessings to guide and purify his Muslim warriors in preparation for battle. However, Allah also sent thousands of angels to help his warriors win by making their hearts more firm to Allah’s command to kill unbelievers, and by removing all uncertainty and fear within them. It was also the time when Mohammed mandated the killing of captives in battle.

Dates are significant for jihadists. The 17th of Ramadan is a date that Westerners should become familiar with, and take heed. Jihadists are ramping up attacks against the West during the Islamic military month of Ramadan, especially now that the caliphate has been re-established.

The 17th of Ramadan is a date jihadists hold very close to the heart, a date they memorialize… and wouldn’t think twice about reliving it in order to inflict more horrific carnage upon unbelievers.

8 thoughts on “Beware the 17th of Ramadan”