What follows is a brief excerpt from Tommy Robinson’s book, Enemy of the State. Just a few pages, since I have to type them out by hand. No cut-and-paste here, unfortunately.

In this post I’d planned to cover the whole of his solitary confinement during one of the imprisonments…which sometimes turned into moveable feasts as they booted him from one prison to another (one time sending him on to the next nick in a taxi. This dangerous Category A prisoner in a cab, for heaven’s sake?!).

However — just as I do — Tommy has many tangential things to say, so he takes the long way home. It must be an Irish thing. Ya think?

Thus this becomes instead a preface to his time in solitary.

As my health permits, I will be transcribing and posting further excerpts. When I heard they’d charged him yet again, with a court date on February 3rd, I tried to think of something, anything, I could do to motivate his fellow countrymen to take action against this horrific travesty.

Since we have neither money nor influence, this is my way of coping with my own anguish over the systematic torture and injustice this man has endured. I keep thinking of his mum…

What is being done to Tommy by the deeply evil legal system under whose boot he is being crushed ought to make the stones cry out for justice.

The section below is from Chapter 15, page 209 ff [with my italicized remarks in brackets].

You are only supposed to do a maximum of 72 hours in solitary confinement, when you are imprisoned in the British penal system, before your case is referred to the Home Secretary for consideration.

I described earlier how I did that first stretch in Bedford prison as a young man, saying that I reckoned I could handle it. You find a group of blokes you can relate to, talk to, hang with. There are basic comforts, exercise, activities, a television to watch, a reasonable representation of a social life. I suppose you could say.

Solitary confinement, being what they call ‘down the block’ is very different indeed. When that case for illegally entering the USA arose, and because of the threats against me, I was usually asked if I wanted to ‘go on the numbers’, which meant did I want protection? That in turn meant did I want to be sectioned with all the various perverts and paedophiles, kept away from the general population?

No, I did not, thank you very much. If it meant risking my life in and amongst Islamic terrorists, so be it. I wasn’t choosing to get myself locked away with all those weirdos. I’d rather take my chances. It was an old-fashioned Luton-pride thing, I suppose. [NOTE: and a smart thing, too. The ‘justice’ system would have forever stamped his file “PERVERT” and told all the media. Any protestations to the contrary would never have made it into the pages of those same media.]

Down the block, you are caged in a room pretty much like a police cell, which is meant by definition to be for temporary confinement. A concrete ‘bed’ with a thin plastic mattress on it. A toilet. And that, my friends, is that. Once a day you can go out for a shower, make a phone call, then walk around a square metal box with no daylight whatsoever for half an hour, because solitary tends to be underground. [NOTE: Whenever I pictured Tommy in prison in my mind, he was underground in a lone cell. I didn’t find out until much later that this was literally true, rather than my mind’s ‘metaphor’ for what they were doing to him.]

It’s a punishment for someone who has not shown themselves fit to be treated like a normal prisoner. Is it designed to drive a man mad? It sure is. And if not, it’s meant to take him as close to the limit without resorting to torture. That’s why there are strict rules about isolating people until they start trying to claw and eat their way through the walls — or top themselves. You’re supposed to be limited to a 28-day stretch in solitary. [my emphasis]

The blokes who effectively ‘live’ in solitary confinement, because of being a danger to themselves to anyone and everyone including themselves are not human beings in the way most civilized people would recognize the term…

I’ve tried to be as honest as I can here, so far as memory serves, with the mistakes I’ve made, with the downright bloody stupid things I’ve done but which seemed like a good idea at the time. I often knew it was going to end in tears, like the stunt on top of the Fifa building in Zurich. They’re not exactly going to give you a limousine ride to the airport and upgrade you to first class after an escapade like that, are they?

But sometimes making the point, fighting for the principle, has to be worth the minor inconvenience of a few hundred quid fine and a couple of days in a police cell.

I’m not trying to paint myself as some kind of martyr, because that’s not how I see things. I’m just an ordinary bloke who got sick and tired of being a second class citizen in his own town and in his own country.

I simply decided that someone had to stand up and ask the question — what are we doing? Are we happy what we’re allowing to happen to a country that our forefathers fought and died to preserve for their children and grandchildren? Do we know what we’re risking by totally ignoring the issues that were slapping me in the face on a daily basis? Do we even know we’re doing it?

…[…] Whether it was taking apart my working life going back to the Year Dot [NOTE: they took two years trawling through his business paperwork and could never find a farthing out of place so they lied about it, making a mash of expenses and income as ALL income], or whether it was prison governors and screws physically throwing me to the lions by putting me on an open wing amongst violent Muslim extremists, I’ve had the lot thrown at me. 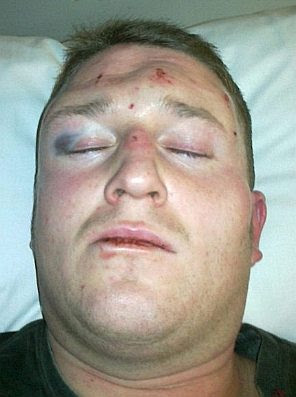 The goal? To grind me down. To shut me up. That’s all I can fathom. To make the point that the state can beat down anyone who thinks they can mess with it. If you can think of a better explanation for some of the tales I’m about to tell you, I’d love to hear it.

Sure, I’ve asked for trouble. And some. But to the extent of prison warders locking me in a room with three violent Muslim prisoners who kicked me into an unrecognizable mess? That doesn’t happen in a civilized country, within a system like the United Kingdom, does it?
Yeah right. Don’t make me laugh. Not that I was doing much of that through broken teeth with my head slashed to the skull and my eyes swollen shut.

Just as I’ve tried to describe the journey of the EDL as an organization, so I’ll try to illustrate how, alongside it, the British state got to work trying to cut the head off it. [NOTE: Don’t forget the death and attempted decapitation of soldier Lee Rigby in May 2013. That metaphor would come to be used by authorities to describe what they wanted to do to the EDL.]

The police came looking for me right after the first UPL demo [NOTE: That must have been in 2009 since the United Peoples of Luton formed as a reaction to the Muslims’ organized spitting and catcalling against the march through Luton of returning troops of the Royal Anglian Regiment who’d survived the Afghan War] and it didn’t stop to the day I walked out of Petersborough nick on Friday July 24th 2015.

Not even then actually.

[NOTE: So with this new stupid charge, that makes it close to seven long years that they’ve been trying to break him, to silence him, to trip him up, to tempt him to become a turncoat, to push him from pillar to post in their lust to destroy one man. So what if his family is caught in the crossfire?

Any Briton who doesn’t speak out against this, be warned: you cannot crawl low enough to be ignored by the police if they decide to come for you, too. Your silence in the face of this horror simply means you get to keep your own head attached to your body a little longer than would be the case if you were to speak out. The system is showing you what they can do and will do if you step out of line. They rely on you being scared enough to STFU as they continue to persecute and to torture Tommy.]

To Be Continued… where I hope to cover his TEN WEEKS in solitary confinement. In Britain. Soviet Britain. No wonder the alcoholism and suicide rate is growing.