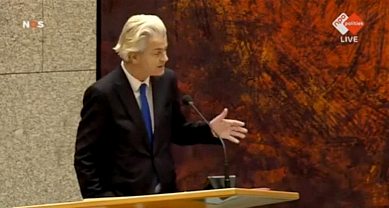 Last Tuesday we posted a video featuring the first few minutes of a debate on the Mediterranean migrant crisis in the lower chamber of the Dutch parliament. Geert Wilders, the leader of the Party for Freedom (Partij voor de Vrijheid, PVV) led off with his proposal to emulate Australia’s “push back” policy, which has eliminated the flood of refugee boats by preventing even a single one from reaching shore.

Mr. Wilders engaged in vigorous debate with several members of opposing parties. The three most prominent of these — Jesse Klaver of the Green-Left, Sharon Gesthuizen of the Socialist Party, and Attje Kuiken of the Social Democrats — display various attitudes towards their opponent, ranging from angry self-righteousness through amused sarcasm to contemptuous condescension. Yet all three are united in their single-minded insistence that the poor persecuted refugees must not be sent back, but rather accommodated in Europe, no matter the cost.

Their attitude is strikingly reminiscent of the theological concept of Tikkun olam, or “healing the world”, which is much beloved by the (mostly secular) Jewish Left. Somehow, despite the well-known disdain of the Dutch Left for all things Jewish, Tikkun olam seems to have taken hold of the elite bien-pensants of the Netherlands.

This debate is an important one. Despite the complexity and particularity of the Dutch political context, it deserves our full attention. The position taken by the PVV’s opponents is representative of the dominant political attitude across all of Western Europe, against which Mr. Wilders is a voice crying in the wilderness. The gutmenschen of the political class — whether out of cynical political calculation or an earnest belief in the righteousness of their position — seem determined to commit national and cultural suicide rather than allow a single Third-World migrant to fend for himself and be responsible for his own fate.

The current Western zeitgeist concerning immigration and Multiculturalism was effectively caricatured sixty years in advance by the late American cartoonist Al Capp in a fanciful creature known as the shmoo. As noted in the Wikipedia entry:

Against the shmoos of Europe, Geert Wilders stands all but alone in his courageous opposition.

Many thanks to Phlegm, Vederso, and H. Numan for translating this clip, and to Vlad Tepes for the subtitling. See the table below the video for more information on the parties whose representatives take part in the debate: