A few days ago the Islamic State released its latest gruesome propaganda video. This time it was produced by the Libyan franchise of ISIS, which seems to be headquartered in Derna.

The horrific incident depicted in the video — the beheading on the seashore of twenty-one Coptic Christian captives — occurred less than two hundred miles from the island of Crete, and less than six hundred from the Italian island of Lampedusa. 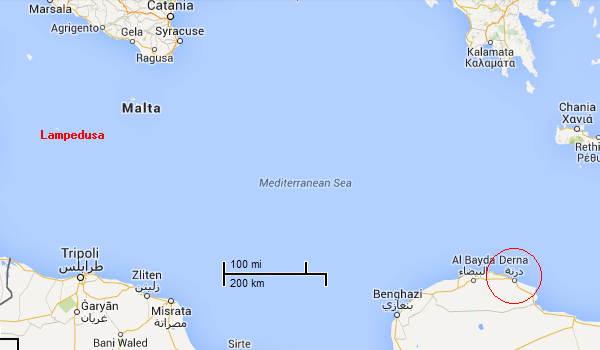 So the Islamic State is no longer just “over there in the sandbox”. It’s on the Mediterranean littoral, just a short sea voyage from the soft underbelly of Europe. In fact, that’s the explicit message of the knife thrust into the air by the mujahid near the end of the video — he is pointing to Rome, the eventual destination of ISIS.

It’s part of my job to watch these Islamic butchery videos when they come out. It’s not something I want to do, but given the expanding reach of the Islamic State, it’s important to be familiar with their propaganda techniques (which are dismayingly effective).

These videos serve a dual purpose: they are produced to “cast terror into the hearts of the unbelievers” (as required by Koran 3:151), and they serve as a recruiting tool for young Muslim men eager to shed infidel blood.

The horror in this most recent video is intensified by the idyllic seaside backdrop for the familiar ritual slaughter of the doomed captives, who are marched along the beach just beyond the edge of the breaking waves before being beheaded on their knees in the sand. The executioner utters the usual rhetoric, augmented with belligerent imprecations aimed specifically at Christians.

When I saw the knives approaching the throats of the victims, I averted my eyes to avoid the nightmare-inducing footage of lovingly documented ritual slaughter. Every ten or fifteen seconds I would steal a glance to see if that part was over. When it finally was — when the heads had been separated from the bodies and placed on display — I started watching again.

At that point I thought I had seen the worst, but I was wrong. The final thirty seconds of the video turned out to be the most horrific of all. I’ve placed further description and a screen capture below the jump, so that readers may skip it if they wish. I found it profoundly disturbing, which is one of the reasons I am writing this post: to try and come to terms with it.

After the bodies and heads were shown, the camera panned slowly across the sand, where runnels of blood were flowing into the surf. It then turned and lifted to show the breaking waves, which were deep red to the left and right as far as the eye could see, and also for a long way out from shore. 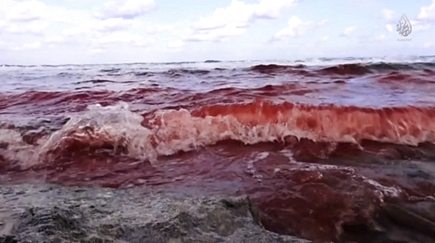 Now, it may be that in order to achieve the desired cinematic effect, the ISIS production team had gone to the local halal slaughterhouse and acquired barrels of cows’ or sheep’s blood, and dumped them on that beach to augment the human blood, to make sure that the surf was good and red.

But if that is the case, it only further emphasizes the deep evil we are witnessing in this video. This red surf, this sea of blood, is a selling point for the mujahideen. They deliberately create these elaborate images of slaughter and exsanguination to encourage would-be jihad warriors to make hijra to the Islamic state, and also to entice infidel psychopaths to convert to Islam.

The Nazis and the Communists did not approach this level of horror. Not even North Korea can match it.

I received a tip about the new ISIS video shortly after it was uploaded to YouTube, and watched it soon afterwards. It remained up for a few hours, and was viewed more than 94,000 times before it was taken down.

The next day it was in all the news headlines. Most stories included screen caps of the executioner with the raised knife, or the doomed men being marched along the shore, one mujahid guarding each captive. Most reports included the fact that the victims were Christians, and were slaughtered because of their religion. Even CNN mentioned it.

But not President Obama. He managed to condemn the massacre without referencing anything more than the Egyptian nationality of the men who were slaughtered. Funny about that.

A reader who had seen some of the news stories wrote to ask whether I had seen the video, saying that it no longer seemed to be available online. I told him that yes, I had seen it before it had been taken down by YouTube.

He wrote back with a series of questions, which I answered as best I could:

How come you get to see it, but the public does not?

Anybody could see it who had the URL, until it was taken down.

How many minutes long was the video?

I think about ten minutes.

Was there any music or sound effects?

Did it have an Arabic narration, with English subtitles?

It was in English, with Arabic subtitles.

What reason did YouTube give for taking it down?

“This video has been removed as a violation of YouTube’s policy against spam, scams, and commercially deceptive content.”

Did any of the 21 show anything less than full cooperation?

No. They looked resigned, defeated.

Did anyone lie on his belly, back, or side, or flop around?

Not until they were pushed face-down into the sand.

How were the 21 beheaders confident of full cooperation from all 21 victims?

Vlad and I have a theory about that, and for all of these videos. We think they rehearse these things over and over again, until the captives get used to it. They can’t tell which time is the real one until the knife actually enters their flesh.

Did the victims appear drugged or sedated?

At the end, after all the heads had been severed, you saw the blood running across the beach, big pools of it, and into the surf. And then you saw waves breaking, and they were blood-red left and right, and far as the eye could see, and way, way out into the sea.

It made me say yet again: “Satan is loose in the world.”

I had a skype conversation about ISIS with a friend of mine later that night. He had only watched the beginning of the video — switching off, as most sane viewers did, as soon as the knives began to cut — and hadn’t seen the bloody surf. After I told him about it, we had the following discussion.

Note: he’s secular, and I’m a Christian, but we’re in basic agreement about the awful significance of what we are witnessing nowadays (he is “A”, and I am “B”):

If you’ve made it all the way to then end of this post, you probably wish you had never heard about any of this.

And I can’t help but sympathize with you. It’s at times like this that I wish I had never gone into this line of work. I could have done something else, something tedious and boring and quiet, with no headless bodies on the shore. No bloody surf.

Or I could have just sat by the kitchen window, watching the birds and the squirrels in the yard.

But here we are. This is what is really happening in the world, right now, in our time. This is the time that is given us. It can’t be avoided.

Sooner or later we will all have to face up to the horror that is upon us.