Islamization and Hijacked Patriotism
by Fjordman

I have just seen the film American Sniper, directed by Clint Eastwood, about Chris Kyle and his experiences as a very efficient sniper in Iraq. I was not initially planning to see it, but then I heard that it had been denounced by left-wing filmmaker Michael Moore. That is a recommendation in my book.

Chris Kyle had flaws just like the rest of us. He was not a saint. However, I do not doubt that he considered himself a true patriot. What my strongest impression was after seeing this film is how much the genuine patriotism of Western citizens is abused by the rotten Western ruling elites. 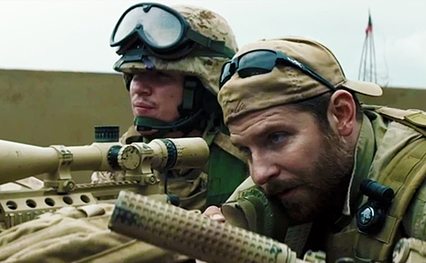 In one scene in the film, the character of Kyle, played by Bradley Cooper, explains why he is in Iraq. He wants to fight them (militant Muslims) in the Middle East, so that he will not have to fight them in New York or San Diego. That is an admirable sentiment. I understand his will to fight enemies who had attacked his country.

What Chris Kyle did not understand is that the natural patriotism of many Americans after the Jihadist attacks of September 11, 2001 was quickly hijacked. A decade and a half later, the number of radical Muslims in New York, Los Angeles, Toronto, London, Sydney, Paris, Berlin or Rome is higher than ever. That is because Muslim immigration continues unabated. After the deadly attacks in New York, Madrid, London and Paris, Western leaders publicly declared that Islam is a religion of peace. Muslim immigration continued as before.

What did the USA and the rest of the Western world really achieve in Iraq and Afghanistan from 2001 to 2015? I have seen claims that the USA alone has spent more than 1,000 billion dollars since September 2001 on fighting “terror.” Others suggest even higher figures. What was the result of spending all that money? Sponsoring the ethnic cleansing of Christians and other non-Muslims in Iraq? Making Afghanistan safe for opium production?

I have enjoyed a lifelong interest in astronomy and space exploration. I cannot help but wonder what we could have achieved if that money had been spent on something else. Let us say we spent a quarter of this sum on space exploration. For that money, we could now have had orbiters around all of the major planets in our Solar System, including Uranus and Neptune. We could have funded a new generation of robotic probes investigating some of the most interesting moons in our Solar System, such as Europa, Ganymede, Callisto, Enceladus and Titan. We could have had many large new ground-based observatories, combined with a brand new fleet of space observatories in all electromagnetic wavelengths. We might even have had some money left over for a manned mission to Mars. Not just a one-way trip, but perhaps a return trip.

These opportunities have been wasted because Western political elites decided that they wanted to spend our money on trying to make Muslims less Islamic, while importing large numbers of them to the West.

Move forward nearly fourteen years, this time to France. On January 10-11 2015, millions of people across France marched to honor the victims of the Charlie Hebdo massacre in Paris. The problem was that the real outrage of many normal citizens was once more quickly hijacked by the political elites and the mass media. As Robert Spencer aptly remarked: “Millions in Paris rally against nothing in particular.”

All the European leaders present, including French President François Hollande, assured us that Islam is a religion of peace which had nothing to do with the Jihadist terror attack. “The attacks in Paris are an insult to Islam,” stressed President Hollande, reiterating that “Muslims are the main victims of terrorism.” This closely echoes the words of U.S. President George W. Bush in September 2001 that “Islam is peace” and that “These acts of violence against innocents violate the fundamental tenets of the Islamic faith.”

This was nonsense then, and it is nonsense now. It neatly sums up why the Western world has been losing every day since then.

As one observer in France remarked: “Current social plan: we are one. No, really. Really we are. We are all nice and good when we are together. Islam is just another religion, and can be accommodated, integrated, in spite of centuries of evidence to the contrary. Negotiate with your executioner. We just have to keep calm and carry on believing the loony narrative that we can live together with a value system that seeks our destruction.”

I become more and more hardened in my long-standing conviction that Problem Number 1 is the lying, cheating Globalist Western ruling elites and their open borders ideology. Problem Number 2 is Muslim Jihadists and other hostile aliens. I remain convinced that the West has the intellectual, economic and military capability to deal with the Islamic threat, if we do so in a sensible manner. We are currently prevented from doing so due to our ruling elites.

We cannot deal properly with the Islamic threat until the useless elites and their damaging Multicultural, Globalist ideology have been removed from power throughout the Western world.

30 thoughts on “Islamization and Hijacked Patriotism”