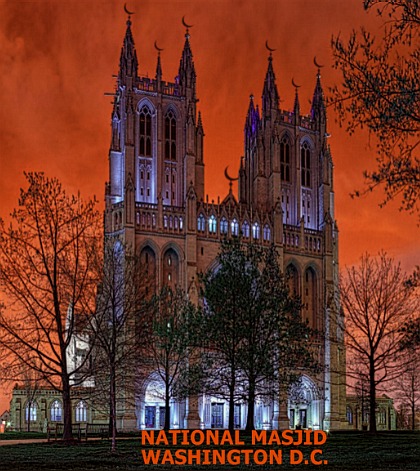 On Friday November 14, 2014 the Episcopal Church in the United States hosted an “ecumenical” Muslim prayer service at the National Cathedral in Washington D.C.

The date was the 100th anniversary to the day of the last jihad declared against non-Muslims by the last Caliph, the sultan of the Ottoman Empire.

Here are three brief excerpts from what the imams said in their prayers. But what were they really saying?

The following 4.5-minute video contains short clips from Friday’s service, accompanied by explanatory material to help the reader understand what all devout Muslims already know about the imam’s words.

Many thanks to Dr. Andrew Bostom for his invaluable research, to ritamalik for the timing and translation, and to Vlad Tepes for the subtitling:

Those who are interested may watch the longer video (1 hour 20 minutes).

What Mr. Rasool omitted is the opening half of verse 5:82: “Verily, you will find the strongest among men in enmity to the believers (Muslims) the Jews and those who are Al-Mushrikun (i.e., ‘idolatrous’ Hindus, Buddhists, and Animists).” The Jew-hating nature of this verse was re-affirmed by Sunni Islam’s most prestigious center of religious education, Al-Azhar University, and its current leading cleric, Grand Imam, Ahmed al-Tayeb.

Authoritative classical and modern exegeses on this verse show its implied threat of violent jihad.

Maulana Muhammad Shafi (1898-1976), a former grand mufti of India (prior to the August, 1947 partition), was the author of “Maariful Qur’an”, the best-known Koranic commentary in Urdu. His modern gloss on Koran 3:26 establishes a 600-year consensus of opinion, adding ominous, threatening contemporary overtones of ongoing Islamic conquests in our era:

Appearing in the form of a prayer, this verse [3:26] so eloquently brings into focus the most perfect power of Allah as it manifests itself in the rise and fall of nations and in the revolutions that rock countries. At the same time it gives a hint that the prophecy made by the Holy Prophet [Muhammad] will come to pass and Persia and Byzantium will fall to Muslims. Here, enemies of Islam have been warned that they have not learned their lesson from the rise and fall of past wielders of power for they judge events and personalities from the material angle while the truth is that all powers and governments of the world are in the hands of the most pristine power of Allah, the one in whose hands lies all honor and disgrace.

The phrase from Qur’an 1:7 mentions two groups of people who have failed to win the favor of Allah: those who have incurred his wrath, and those who have “gone astray” or are “misguided”.

The following authentic saying by Muhammad was collected by At-Tirmidhi, whose hadith are considered fifth in strength of the six major hadith collections:

This is a warning for Muslims not to follow in the evil footsteps of Jews and Christians.

The historian Robert Conquest had this to say concerning Communism and the “useful idiots” who were duped by it:

A con job needs a con man and a sucker. In their case many suckers even managed not to take in what they saw with their own eyes, or rather somehow to process unpleasantness mentally into something acceptable… ‘Mindset’ seems too strong a word: these were minds like jelly, ready for the master’s imprint…This was an intellectual and moral disgrace on a massive scale.

Islam is the Communism of the 21st Century.

Previous posts about the Islamic prayer service at the Washington National Cathedral:

9 thoughts on “What Happened at the National Cathedral Last Friday?”