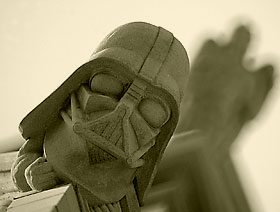 As many readers already know, Dymphna and I are Episcopalians. We are admittedly hanging onto the church by the thinnest of threads — mostly because we like our small local parish — but we are still canonical residents of our diocese, the ECUSA, and the Anglican Communion.

That’s why I almost didn’t post about tomorrow’s momentous event at the Washington National Cathedral. It gives me the creeps. It causes me to despair for my church, and for Christendom in general. And it makes me deeply, deeply angry.

The administrative leaders of the Episcopal Church obviously have no idea what it means to allow their building to be used a place where formal Islamic prayers take place. Or maybe they do, and they don’t mind. In any case, once Muslims have said their prayers as an assembled group, the structure becomes a masjid, a mosque, and the property of the waqf board, the Islamic trust for the Ummah. The local Islamic community may decide to defer taking formal title to the building until their numbers in the Washington area are sufficient to make it prudent to do so, but after tomorrow, the National Cathedral will have become a mosque.

And not just any old mosque, but one with full connectivity to the Muslim Brotherhood. Here’s what the Center for Security Policy said about the whole sordid affair in a press release from earlier today:

(Washington, D.C.): On the eve of the 100th anniversary of the start of one of history’s most horrific acts of genocide, a group of prominent figures in the religious, national security and human rights communities have written a letter to the leadership of Washington’s National Cathedral. They urged the Cathedral not to allow a group of Muslim Brotherhood-affiliated organizations to utilize its house of worship on November 14th, 2014 for a prayer service that will inevitably — given the nature of the sponsors, their traditional service and the occasion — be a highly symbolic demonstration of Islamic supremacism.

November 14th, 2014, will be the 100th anniversary of the last sitting Caliph of the Ottoman Empire’s call for jihad against non-believers. The call for violent jihad against non-believers directly resulted in a genocide against the Armenian, Assyrian and Greek residents of Turkey. And while for most westerners the November 14th Jihad declaration is little more than a footnote in the annals of World War I, for Islamic supremacists like those associated with Muslim Brotherhood, it is a date pregnant with meaning. To permit such a public display, and permit such groups to occupy the National Cathedral of the United States on this date represents an affront to the memories of those who were killed as a result of this genocide, and an affront to those Christians across the Middle East who are currently under threat by those who seek to emulate it.

Among the signatories of the letter, which was organized by the Center for Security Policy were:

The group offered to meet with the leadership of the National Cathedral and to provide additional evidence regarding how the groups involved in the November 14th event have ties to the Muslim Brotherhood. The signatories called to mind that, as proven in federal court, the stated goal of the Brotherhood in America is to “destroy Western civilization from within.”

The letter also notes how the Muslim Brotherhood has “…repeatedly targeted Middle Eastern Christians,” including “bombing places of worship” as well as attacking “fellow Muslims who do not meet the Brotherhood’s strict Shariah standards.” Such atrocities and other acts of violent jihad are not things of the past; they are happening currently.

The National Cathedral was recently rocked by an unusual earthquake, causing millions of dollars in damage to its exquisite structure. The act of opening its doors to top members and front groups of the Muslim Brotherhood — an organization that epitomizes and practices the worst of Islam’s intolerant Shariah code — on a day that will always be associated with genocidal jihadism should rock the conscience of every member of the Cathedral’s community. If this outrageous event is not cancelled, the damage that will assuredly be caused to the reputation of the institution’s leadership and, by association, the Cathedral itself will likely be far more severe and difficult to repair than any caused by the tremor.

The full text of the letter is available here. [pdf]

Below is a brief Fox News report about tomorrow’s event:

WASHINGTON — Washington National Cathedral is hosting a Muslim prayer service for the first time on Friday.

Planners say they hope Friday’s service at the historic cathedral will foster more understanding and acceptance between Christians and Muslims around the world.

The prominent Episcopal cathedral often hosts national events, such as presidential funerals, and has hosted Muslims at various interfaith services in the past. But planners say this is the first time the cathedral has invited Muslims to lead their own prayers there, which they call a “powerful symbolic gesture.”

In a statement, Rasool says, “This is a dramatic moment in the world and in Muslim-Christian relations.”

And this is the high-minded, suave, ever-so-nice announcement from the Episcopal News Service:

Muslim Friday prayers to be offered at Washington National Cathedral

Washington National Cathedral and five Muslim groups have announced that the first celebration of Muslim Friday prayers (Jumaa) at the cathedral will be observed on Friday, Nov. 14.

“Leaders believe offering Muslim prayers at the Christian cathedral shows more than hospitality,” according to a cathedral media advisory. “It demonstrates an appreciation of one another’s prayer traditions and is a powerful symbolic gesture toward a deeper relationship between the two Abrahamic traditions.”

The prayers will be held between 11:30 a.m. and 1:30 p.m. and will be attended by the Rev. Canon Gina Campbell, director of liturgy for Washington National Cathedral, South African Ambassador Ebrahim Rasool, Masjid Muhammad of The Nation’s Mosque,

The opportunity grew out of a “trusted relationship” between Campbell and Rasool, who met while planning the national memorial service for Nelson Mandela, the advisory said.

“Deep relationships come out of prayer,” said Campbell. “Different connections come out of being in prayer — beyond the political or academic.”

Rasool thanked Campbell for the cathedral’s generous offer to use Friday prayers as a beginning to a deeper conversation and partnership. “This is a dramatic moment in the world and in Muslim-Christian relations,” said Rasool. “This needs to be a world in which all are free to believe and practice and in which we avoid bigotry, Islamaphobia, racism, anti-Semitism, and anti-Christianity and to embrace our humanity and to embrace faith.”

The cathedral has welcomed Muslims in the past, often at interfaith services and events, as well as at the Interfaith Conference of Greater Washington’s annual concert and specific programs such as the 2008 Ramadan Iftar at the Cathedral College. But this is the first time the cathedral has invited Muslims to come and lead their own prayers in a space known as a house of prayer for all people.

Planners hope that the people around the world will take note of this service and the welcome extended by the cathedral so that Muslims everywhere will adopt a reciprocal welcome of Christians by Muslims.

The prayers will be offered in the north transept, an area of the cathedral with arches and limited iconography that provide an ideal space — almost mosque-like — with the appropriate orientation for Muslim prayers.

The prayers will also be webcast live from the cathedral’s website.

34 thoughts on “The Washington National Masjid”