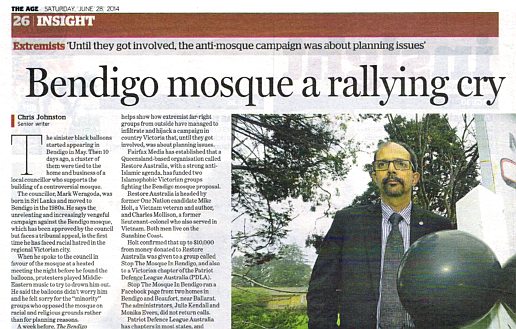 Yesterday a reader in Australia sent us a scan of a print article in a newspaper called The Age. I don’t know much about the paper, but Australians tell me it is a predictably lefty rag, and that sensible people refer to it disparagingly as “The Aged”.

The article, written by Chris Johnston, is entitled “The power of hate: Bendigo mosque a rallying cry”. It’s a hit-piece on the Q Society, which opposes the Islamization of Australia and has been one of the leading groups in the campaign against the proposed mosque in Bendigo. But the reason our reader sent it to us is that the author gives Gates of Vienna an honored place among the “far-right extremists” and “racists” who object to Islamization.

The print article was dated June 28, but there is an online version dated the 27th that differs only slightly in wording.

Our blog is featured in the last few paragraphs of the piece. I’d never heard of the term “switcher” until I read this article. In the excerpt below, the author is referring to and quoting from Prof. Andrew Jakubowicz, “a specialist in multiculturalism from the University of Technology, Sydney”:

Professor Jakubowicz is studying global internet racism. He says he has found solid links between Australian anti-Islam groups, such as the Australian Defence League, with international groups in the US and Europe that he calls “switchers”. These groups compile political information and move it through global networks.

The key switcher in Europe, he says, is called Gates of Vienna, a website named after the battle in 1863 [sic] in which Christians beat Turkish Muslim Ottomans who were trying to capture the Austrian capital.

The Norwegian mass killer of 77 people in 2011, Anders Breivik, wrote in his own manifesto that he read Gates of Vienna. Breivik was rabidly anti-Muslim.

“They are looking for places to build communities and draw them into campaigns. In a sense, it is a tamer mirror image of jihadism, the social psychology is not dissimilar. The practice is obviously different but the aim is similar. Activist racists in this country are involved in what I would call community development projects.” [emphasis added]

Firstly, given where I was born and raised, if the crucial year were 1863, this blog would be called “Gates of Chancellorsville” rather than “Gates of Vienna”. And Mr. Johnston seems to have fallen victim to the common misperception that we’re in Europe. Oh, well — we’re used to that.

Secondly, did you notice the calm, objective tone employed by the author and Professor Jakubowicz when describing the “activist racists” of the Counterjihad? We’re the “mirror image of jihadism”, but at least we’re tamer.

And was Anders Behring Breivik really infected with a lyssavirus? If so, it’s understandable that the Norwegian authorities placed him in solitary confinement.

Thirdly, it’s important that we set the record straight about Anders Behring Breivik and his purported devotion to this blog and the Counterjihad in general.

Yes, it’s true that Mr. Breivik wrote in his “compendium” that he read Gates of Vienna, and especially Fjordman’s essays. Yet that assertion has since been abrogated, as it were.

Earlier this year the Butcher of Utøya sent a letter to a number of media outlets, repudiating his earlier devotion to the Counterjihad and explaining his deliberate deception of gullible media reporters:

The idea was to manipulate the MSM and others so that they would launch a witch-hunt and send their <<media-rape-squads>> against our opponents. It worked quite well.

I was never kicked out of Stormfront. In stead, I attacked them in the compendium in order to protect them, as I knew the authorities would use the fact that I frequented the site, against them, and that an army of leftist journalists otherwise would strike hard…

When the norwegian MSM announced that Fjordman was my role model and idol, they couldnt be more wrong.

I don’t know if the The Age received a copy of Anders Behring Breivik’s letter, but many other non-Scandinavian outlets did. And all of them chose to ignore it. They obviously prefer the official “narrative” about events of July 22, 2011. As do the worthy scribblers at The Aged, who are still promoting it in Australia more than six months after the truth was made public.

So let’s the record straight: Anders Behring Breivik did not gain his inspiration from Gates of Vienna, Fjordman, Jihad Watch, and other Counterjihad sites. He only pretended to, in order to pull the wool over the eyes of ideologues in the media and academia.

In the future, when people use Internet search engines to research this topic, I want them to be at least as likely to run into the truth as they are to read the disinformation being retailed by The Age. That’s why I’m revisiting the controversy here.

If you want to prevent The Lie from gaining ascendancy, I urge you to do the same on your own blog or website.

32 thoughts on “The Key Switcher?”