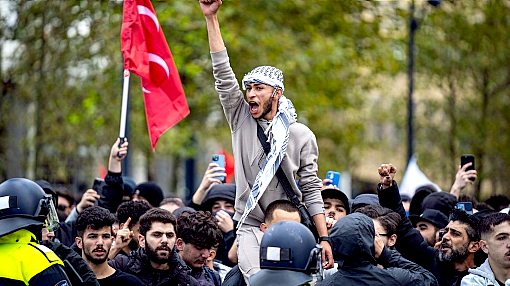 The Dutch chapter of the anti-Islam group Pegida tried to stage a Koran-burning in Rotterdam, but failed miserably. I suppose they lack the trademark panache exhibited by Rasmus Paludan in Denmark. Or maybe there just isn’t enough popular support for resisting the Islamization of the Netherlands.

The Pegida leader Edwin Wagensveld was arrested at the event, and the Koran that was slated for burning was seized by police. I hope they wore gloves and exhibited the requisite respect when they handled the holy book, the way the guards at Guantanamo did when bringing Korans to Al Qaeda prisoners.

The following video and article report on the Pegida protest, and the much more numerous counter-protesters. In the photo at the top of this post, it’s worth noting that in addition to the clenched fists and Turkish flags, we see the one-finger sign of the Salafists, which represents the tawhid, the oneness of Allah.

The article below (also translated by Gary Fouse) about the Pegida event appeared on the website of the Dutch state broadcaster NOS:

Brief unrest in Rotterdam at Pegida action and counter-protest

There was a short period of unrest near the Rotterdam Central Train Station today. The reason was a scheduled Koran-burning by the anti-Islam movement Pegida, which attracted hundreds of counter-demonstrators.

Pegida was to start demonstrating at 2pm at the station square, and there was a plan to burn a Koran. However, it did not happen: The police seized the Koran from Pegida leader Edwin Wagensveld in order “to prevent escalation, and thus serious disorder.” Wagensveld was arrested because, according to police, he shouted “an insulting slogan”. Other than Wagensveld, there were very few Pegida followers, said a police spokesperson.

The counter-protesters, mostly young Muslims, burst into cheers. The mobile police unit was deployed to contain the group of youths. They often shouted “Allahu Akhbar” and, according to the regional news outlet Rijnmond, threw eggs and smoke bombs at police.

Previously, various parties had objected to the burning event. For example, the Muslim umbrella organization Spior sent in a notice of objection, and the political fraction Denk [the Turkish party] requested an emergency debate. Deputy Mayor Robert Simons subsequently wrote in a letter to the city council that it was forbidden to light a fire in public space, and that therefore the Koran-burning could not go forward.

Pegida leader Edwin Wagensveld is arrested for “insulting the faith”.

4 thoughts on “Score One For the Prophet”