Who is hyping the threat of nuclear war, and why?

According to the UN, the “World is ‘one miscalculation away from nuclear annihilation’,” as reported in an RT article.

This prompted our Hungarian correspondent László to dissect the threat and attempt to translate it from “Deep State” into English. 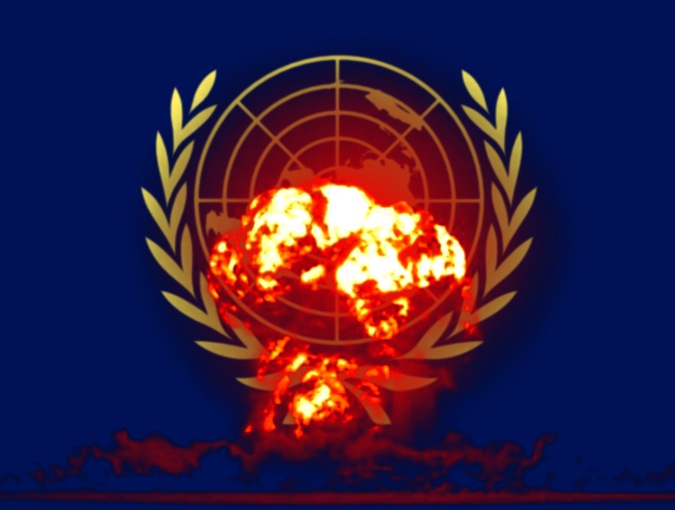 “World is ‘one miscalculation away from nuclear annihilation’ — UN chief. Secretary-General António Guterres has warned that humanity faces the greatest risk since the Cold War”

“Miscalculation”, I think, means that the only organization that can calculate OUR safety FOR US the right way, is a higher power above all of us. Something like… the UN.

The full-blown Nuclear Psyop has now taken off, after George Soros cheerfully heralded it back in March when I wrote on Gates of Vienna the analysis below about his article:

“‘_If one decodes the word “risk” in this context, it translates into the globalist intention of floating the horror of a kinetic “WW3” above the head of humanity, with the implicit threat of nuclear escalation. You know, “It is not the thing yet, it is not WW3, it is the risk!” In this framework what Soros’ article is doing is no less than psychological warfare, and very similar to the Corona psy-op.”

Since Soros has announced “WW3”, not much has changed in this regard — it is just that “they” are now turning the “risk-meter” up a bit more, in order to ramp up fear.

The UN chief gives the game away when he blames “disunity”:

“Geopolitical tensions are reaching new heights. Competition is trumping cooperation and collaboration. Mistrust has replaced dialogue, and disunity has replaced disarmament.” [my emphasis]

Nuclear “disarmament”, of course, will not take place in the foreseeable future — it is just gaslighting to create an excuse for giving the UN more power.

The translation of the above paragraph from ‘Deep State’ to English will surprise no one: the global geopolitical theater is about the agenda of the One World Government — the only organization which, they imply, will be able to handle “disunity”. It, of course, means the subordination of all those dangerous nations with all their uncontrollably free people to a central power. (The world-war theater includes Russia, on a side note, as Russia is in on Agenda 2030 as well.)

So in this context the “nuclear threat” is a protection racket. A terrorist one, on that note.

Before someone interprets this as saying the nuclear threat was unreal:

No, it isn’t. A professional protection racket includes your restaurant getting destroyed a bit, so that you take the mafia seriously.

This translates into tactical nuclear strikes — the golden middle way to the optimal level of the desired controlled destruction with the highest psychological impact. Smaller-scale, limited tactical strikes that demolish whole cities may cause enormous fear in the entire world population; while the only ones who would know that it will not be escalated will be those who run the theater.

Because in case it were to escalate into an uncontrollable nuclear war, the predatory overclass would lose control (and might even die themselves). And this war is all about total control — at least on the highest strategic levels. So it is safe to say that the Powers That Be are not planning to escalate a nuclear war — but they want to make us believe that their puppets are.

Thus, before such a limited nuclear strike happens (and especially after it), everyone else but “them” will be so terrified of the prospect that it could escalate even more, that people will demand “the solution”. It is in actuality sheer terrorism. And the solution to terrorism is the above-mentioned “unity”, a.k.a. the One World Government — that will prevent its own terror that it blames on nation states.

Therefore, after some horrible tactical nuclear strikes, the perceived “need” for a World Government will suddenly become “unquestionable” — because anyone who dares to question it will be called “the enemy of humanity”. A perfect excuse to extort the total submission of the world’s population, since those of us who take it all seriously will enforce it upon others who do not. In the name of the “greater good” and the “survival of humanity”. After the voluntary jab-enforcers, the voluntary peace-enforcers will appear among us.

This is the road to “nuclear communism”. The same way it happened during the “emergency” takeover due to the Covid “threat” that led to “Covid communism” (and fascism).

I admit that it would be hard not to take it seriously when so many people die and suffer all at once in a Hiroshima-like nuclear strike. This is a sort of tribal instinct of humanity: the more people who die in one place at one time, the more the rest of us worry. Though very few care about the same number of victims at dispersed locations and over somewhat longer periods of time, killed by less spectacular causes like local wars, the jab genocide and famine.

A nuclear strike is different: it is absolutely newsworthy and psychologically impactful. Imagine the public reaction. And that reaction is the secondary impact — which may turn out to be even stronger and more harmful than the kinetic attack itself. For sure, it would be a planned impact, with planned solutions for protecting “security”. Similar to 9/11, which resulted in higher “security controls” all over the world.

To sum it up: my prediction is that we can expect limited nuclear warfare in the future.

I usually refrain from making predictions, because they can easily miss the target. But this time I think it might prove to be useful, because a sober approach may cut through the massive fear the Powers That Be are trying to induce in all of us in order to destabilize our societies and gain our approval for totalitarian tyranny.

So in this sense it is not really a prediction that I am making — it is rather a counter-prediction or counter-psyop. Why only the enemy should be allowed to project (mostly unfounded) “predictions” upon us? Instead of internalizing such enemy projections, we should recognize and avert them.

This ongoing war is a theater, on many levels. (Who said that a theater cannot be bloody?) “They” want to destroy our morale with the nuclear psyop. We cannot let them succeed. We must cut through fear and break free.

However, my hypothesis of a future deep-state strategy of tactical nuclear strikes is just that: a hypothesis. So one can argue that, just as the Powers That Be overplayed their hands with the Corona scam, they can easily lose their grip on any other project, even a nuclear one. Moreover, a world war with a bit of nuclear escalation is probably also a prepared ‘emergency exit’ for the parasitic overclass, in the event they get cornered. They have their safe bunkers up and running, after all.

Which leads us back to the plausibility of the total “nuclear annihilation” that Guterres has just threatened us with. Therefore it all boils down to this question, about the worst-case scenario:

If nuclear war were really to escalate, should the solution be that we submit to tyranny?

Someone who read this essay before it was published concluded:

“You offer a rational theory to ponder by dissecting the mongrel of evil intention himself.”

7 thoughts on “The Nuclear Protection Racket”