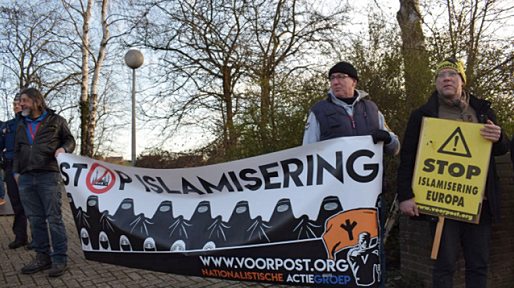 Mechelen is a Flemish city located between Antwerp and Brussels. The following news report describes the verdict in a court case against “right-wing extremists” in Mechelen who had the audacity to carry banners protesting the Islamization of Flanders.

In the past I’ve seen Filip Dewinter and other leaders of Vlaams Belang carrying “Stop Islamisering” banners. Why weren’t they prosecuted?

Many thanks to Gary Fouse for translating this article from the Flemish news service VRT:

Photo caption: Banners in question at another protest in February of last year

The criminal court of Mechelen has sentenced four members of the radical-right organization Voorpost for incitement of hate and violence during a protest in May of last year. On a banner under the words “Stop Islamization” were pictured some women in burkas or niqabs, and this combination, according to the court, went too far. Various Parliament members from Vlaams Belang have protested against the verdict in Mechelen.

On Saturday 30 May, 2020, inn the Saturday Market in Mechelen, the radical right organization Voorpost held a protest against what they call Islamization. There some members also held a banner with the words “Stop Islamization”. Under the words was depicted a row of women wearing niqabs and a second row of women with burkas.

According to the criminal court in Mechelen, that banner went too far. “By having such signs and banners, the accused have the aim of instilling fear and creating hate in society by convincing onlookers of the idea that Islam may in the future dominate Flanders,” the verdict reads.

They sketch an imagined danger whereby each woman, as a result of this so-called Islamization, will be forced to wear a burka or niqab, or that every woman, as a result, will wear a burka or niqab. Such ideas attempt to feed on the fear and hate against Muslim society or to awaken it, so that others will be incited to engage in similar hateful and fear-mongering behaviors, said the court.

The four members of Voorpost are all sentenced to six months imprisonment. For three of them. this was postponed; for one the sentence went into effect. Their lawyer, Luc Deceuninck, will now look into whether they will appeal. But that seems probable. “This was just freedom of speech, a political statement, nothing else,” says Deceuninck in an initial reaction to the judgment.

“If someone says stop Islamization, they are not saying stop Islam. They are saying: Stop the pervasive influence of certain Islamic customs in our society. That is what they mean. The court actually did not answer our arguments,” said the displeased lawyer.

Several parliamentarians from Vlaams Belang have protested in Mechelen against the verdict of the criminal court of Mechelen. On the Grand Market they unfurled banners with the same message, filled in with posters with the message, “Stop censorship”.

“The criminal conviction of the four Voorpost-activists is far beyond a miscarriage of justice. This is an attack on free speech, democracy, and the possibility of carrying on opposition. The resistance against Islamization is not an incitement to hate or violence. That is just freedom of speech. That is protecting what is dear to us, our identity,” said the Vlaams Belang chairman Tom Van Grieken in The Journal.

Among those present were most of the leaders of the party, such as chairman Tom Van Grieken, federal group leader Barbara Pas, European Parliament member Gerolf Annemans, and some 25 Parliament members, including Flemish Parliament members Filip Dewinter, Sam Van Rooy, Anke Van Dermeersch, and Guy D’haeseleer.

11 thoughts on ““Stop Islamization”? You WAYCIST!”