Ashraf Ramelah sends a new report on the persecution of Copts and the suppression of free speech in Egypt. 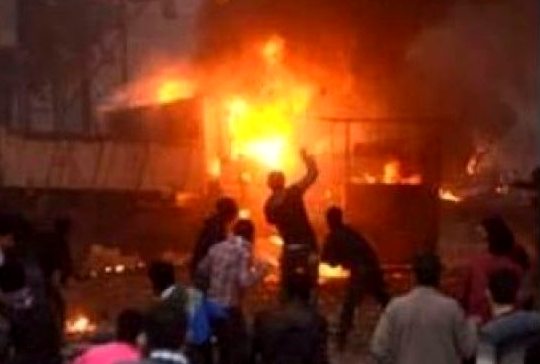 The most recent escalation of violence against Egyptian Copts living in Egypt occurred last month (November 2020) and was sparked by Facebook posts prompting Muslim radicals to retaliate for religious comments. After reading Christian “insults” Muslim goons set out to attack Coptic villages.

Christian Copts clarifying points on social media have been victims of sectarian hunts and ambushes by ruffians looking for a trigger to pull. Counterfeit pages that scammers produce bait Christians into commenting and then charge them with insulting Islam.

Copts are often tricked into responses by Islamists who have befriended them with hidden identities — sometimes showing a Christian cross to trick the page owner. Islamists harass and instigate in a scheme to entrap. Those are only the thugs at work. Additionally, the state’s “internet police” spy on Christian Facebook pages to target anti-Islam sentiments.

In other cases, Islamic hackers steal the page owner’s identity and make incendiary statements to frame a Facebook page owner and then track the Christian victim to his home. One such incident led to the village of Al Barsha in part of Al Minya Governorate (300 km south of Cairo).

It did not matter to Islam’s vigilantes that official sources confirmed the hacking of the Al Barsha villager’s Facebook account. Nor did it matter that the Al Barsha Christian did not make the remarks. Islamists set out to harm this Coptic family and displace them from their home just the same.

Molotov cocktails were thrown, the church was targeted as well, and the security police came in to prevent further damage.

Conflicts instigated and executed by Muslim fundamentalists end up in the customary reconciliation sessions known as Bedouin courts. The Christian is always forced to plead guilty when innocent and pay dearly by handing over his home, farm or business to the criminals. The mandatory “peace” agreement of these arbitration sessions always sets the Islamic criminal free and punishes the innocent Christian family. This is precisely the purpose of the arbitration court.

Last year the Egyptian Interior Ministry warned that thousands of Egyptian Facebook accounts were fakes. It added that “great numbers of these fake pages are outside the country and sponsored, funded and managed by countries that are hostile to Egypt.” The Interior Minister’s office went on to say that “such pages are used to spread rumors aiming to generate unrest by Muslim Brotherhood terrorist groups inciting acts of sabotage and violence and spreading chaos in the country, and especially against Copts.”

According to these statements, the stalking and scamming is generated by outside enemies and followed through by inside terror elements. All of it is religious warfare. Meanwhile, what are religious leaders of Al Azhar Institute saying or doing? Islamic censorship and terrorizing due to religious discrimination on social media platforms will not stop unless leaders show the way. The esteemed center of Sunni Islamic scholarship alone holds the power of interpretation of Quranic teachings. Supremacy teachings unfortunately do not support or aid followers to achieve peace and harmony with fellow citizens.

Free speech legislation (Egypt’s real solution) will never be addressed by the Egyptian parliament as long as the Sharia amendment is in place. Recently, however, in regard to a Coptic man’s “mocking Islam” case on social media, Dr. Nadia Hennery, a very courageous parliamentarian and Christian Copt, breached the Sharia principle and demanded “equality under the law.”

Dr. Hennery issued a complaint to include both parties involved in the targeted dialogue. Responding to reactionary noises made by pro-Copts in the media, Dr. Hennery presented a “notice request” in the parliament denouncing the double standard used in the Facebook case with regard to contempt of religion. In doing so, she contradicted state custom for both religion and gender norms, which entail unfairness and discrimination against Christians.

The case concerned a Christian man, a school teacher from Ismailia governorate, who was arrested for his digital words “offending the Islamic prophet.” On his Facebook page, he replied to the post of a Muslim female about the recent incident in France where a Muslim man murdered a school teacher. Her post specified that Christians attacked Islam in cartoons like the one the French teacher showed her class. This prompted the Coptic man to defend his religion and explain that it was not a Christian issue but a secular one because France is a secular country.

At this point the matter escalated. Muslim males posted in defense of the Muslim female poster’s position, which led to the “internet police” pursuing and arresting the Christian man for defaming Islam. Copts reacted in Facebook with an outcry against this injustice.

All eyes were on the courts because of the elevated media storm and the involvement of Dr. Hennery. Public opinion forced the issue.

The male teacher was still in custody and about to be charged with contempt of religion when Dr. Hennery intervened on his behalf to drive authorities to arrest his Muslim adversary as well — the woman who instigated and elicited the unwanted response from the Coptic man.

The Coptic male teacher was temporarily released from custody waiting for his penalty when he was summoned back to the court. This time he was joined by his female counterpart who was accused of posts mocking Christianity on her Facebook page.

After days of interrogation, the accused were both released upon promising better behavior and respect for one another’s religions, i.e., no more open dialogue.

It is important to note that the contempt of religion charge comes with a severe penalty, and because of the addition of an Islamic female defendant the Christian man’s outcome was reversed. In the end, anti-free speech won the day. Islam and Christianity were deemed equal in the suppression of liberty.