It seems that anybody in the world may consider himself a Swede — especially if he has a sob story to promote in Swedish state media. 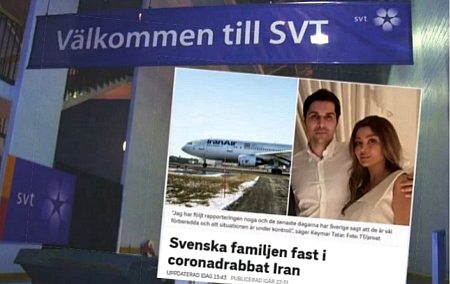 Yesterday, in a report with an implicit criticism of the Swedish Transport Agency’s decision to stop flights from Iran, state television told of a Swedish family who wanted to return to Stockholm. Samhällsnytt can reveal that the family is missing from the Swedish national accounts.

Following our questions, state television has changed its article. In the original version of the news report saved through the archive service web.archive, it was related that the Swedish named family consisting of Keymar Tatar, Asaf Raoufi and their 14-year-old daughter would return to Stockholm at the end of February. But they are stranded in Iran without any opportunity to get to Sweden.

“If the situation is so serious in Iran and you do not consider the authorities credible here, Sweden should take even greater responsibility in bringing home its citizens who are in this country,” Keymar Tatar tells state television, and believes that the Swedish embassy should assist his family with the trip.

Judging from comments in social media, many readers get the impression that the family was on a shorter holiday trip. But when Samhällsnytt contacts the Swedish Tax Agency, it turns out that neither Keymar Tatar nor Asaf Raoufi are listed in Sweden.

According to the agency’s customer service, even Swedish citizens who have moved abroad and have left Sweden — if they ever received a Swedish social security number — will remain registered. Another possibility would be that the people have a protected identity — but then it is unlikely that they would give an interview to SVT with a photo and so on.

Samhällsnytt has contacted the journalist who filed the report, with the Swedish-sounding name Gilda Hamidi-Nia, and the responsible publisher for SVT Nyheter. This afternoon we received a response from SVT’s news manager Michael Kucera. The e-mail response stated the following: “The article is now updated.” The new version of the article now states that the family “has been living in Iran for a few years, but are Swedish citizens and now want to move back to Sweden.”

It is not stated why they want to do it right now, or why state television has chosen to call this process “flying home” if the couple now resides in Iran. In the new version of the article, the video interview with the couple has been removed.

A footnote has also been added:

[Note: In the report this insert appeared only as an image, and LN did not include a translation of it. Scandinavian readers are invited to leave a translation in the comments.]

According to the Swedish Tax Agency’s customer service, as a Swedish citizen, one should remain in the national accounts. During the day we attempted to contact SVT with several follow-up questions, including whether the couple has any connection to Sweden at all.

News manager Michael Kucera told us on the phone that he was “sitting in an inappropriate place” and we would be called tomorrow, after which he ended the call.

In the article that was updated in response to our questions, state television continues to brag, saying that SVT remains committed to quality journalism:

SVT’s news must stand for objectivity and impartiality. What we publish must be true and relevant. If in emergency news situations it may be difficult to get all the facts confirmed, then we should state what we know — and don’t know.

6 thoughts on “But We Identify As Swedes!”