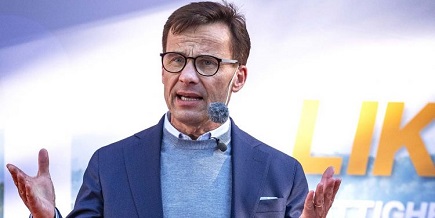 At least one of the leaders of Sweden’s mainstream parties has put his finger to the political wind and discerned which way it is currently blowing. The following piece serves as a useful follow-up to last Sunday’s article on Lena Mellin.

Many thanks to LN for translating this essay from the Swedish dissident site Svegot:

No one should take Ulf Kristersson’s apology seriously

Ulf Kristersson, the leader of the Moderate Party, apologizes and says he believes that mass immigration can create problems.

But why doesn’t he apologize to the people who really deserve it? And above all, can we rely at all on this sailor who is trimming his sails to the wind?

The negative consequences of mass immigration have become impossible to hide even from those who have previously been able to live in their own bubble, either in a part of the Swedish countryside that has been spared from multiculturalism, or for the well-off middle class in the city’s finer neighborhoods.

On the other hand, the always indelicate Prime Minister Stefan Löfven did not quite realize this, and therefore made a disastrous fool of himself in the SVT Agenda (November 17).

[The so-called “center right”] Moderate Party Chairman Ulf Kristersson has been weathering events in the wake of Löfven’s failure. He now goes out on Facebook and apologizes “for the extent that [his] party has helped to forge and freeze the voices that wanted and dared to raise the issues.”

The fact is clear that the fire is directed at Löfven and that an opportunity has occurred to use the public opinion that has now turned against the Prime Minister:

“For what Stefan Löfven cannot see at all, almost everyone else can: It is quite obvious that gang crime, shootings and executions are strongly linked to excessive immigration and woefully inadequate integration. How can you even pretend otherwise?”

Firstly, this kind of statement is good for the national opposition. Not because we think “Tough Ulf” (Tuffe Uffe) will solve the problems, because he will not, but because it continues to normalize our analysis that the multicultural experiment is not a stable foundation for society.

Secondly, everyone has a clear right to change his mind, and if Kristersson suddenly started advocating nationalism and peoplehood (which he does not), it would be quite welcome, although it would take a very long time for any sensible person to believe in him.

Kristersson has long been an advocate of free immigration, and it was only a few years ago that he said in Parliament that current migration policy was good.

So this is not about Kristersson’s having changed his opinion, or that he has really arrived at some deeper insight into multicultural problems. Instead, it is a continued triangulation, that is, an attempt to maximize the number of votes with new gambits that will fill the vacuum whose appearance he has noticed.

I may seem cynical, but everyone who has followed the political debate in recent decades knows that this is how it works.

In this context, we should also not forget that even though Kristersson now raises parts of the problem, he entirely lacks solutions.

His problem with the volume of mass immigration is that it impedes integration, while a nationalist solution to the problem opposes integration.

Our ideas are thus very far from each other, and as a nationalist you can never give your vote to Kristersson or his party.

Apologize to the right people

Symptomatic of Kristersson’s ploy is also that, when he mentions some people who saw the problems of mass immigration early, he refers to Mauricio Rojas and Alice Teodorescu.

Both of these people also happen to have been employed by the Moderates, Rojas in the party’s integration committee and Teodorescu in the party’s working group, for a few months only, to develop a program of new ideas.

So it is certainly not a genuine apology to immigration critics, but a cheap way of trying to elevate the current party’s own employees.

Had the excuse been honestly meant, he instead should have apologized to those who seriously, and far earlier than the two above, warned of the multicultural danger.

He might have apologized to Per Engdahl, to Anders Klarström, to Klas Lund and to Jan Milld, Anders Sundholm and Inger-Siv Mattson of Blågula Frågor, to name just a few. People who have worked in various ways to inform the Swedish people about what will happen if mass immigration is allowed to continue, and who have all in different ways been right in their fears.

Now, I understand that Kristersson will not do it, because he is neither honest nor a nationalist. Kristersson is a globalist, and above all he is a political careerist. He puts his finger in the air, looks at which direction the wind is blowing and tries to find ways to profit from it.

At the same time, the nationalist opposition continues its diligent work, and the Overton window continues to be moved in our direction every day. What we said forty years ago has now reached Kristersson’s speechwriter. We do not intend to rest until the prime minister proclaims that it is time to implement the major recovery program — not until the prime minister from the parliament’s speaker’s chair explains that we will now begin to INTERN, DEPORT and REPATRIATE. [INTERNERA — DEPORTERA — REPATRIERA].

7 thoughts on “The Unbearable Lightness of Being Ulf”