A Europe-wide network of Islamic zealots is preparing for the inevitable time when Europe becomes Islamic. In furtherance of its goals, it holds training retreats in the Alps near the Austrian city of Salzburg.

Many thanks to MissPiggy for translating this article from Salzburger Fenster:

A London network is spreading fundamental Islam worldwide. A team operates in Austria.

“Kevin becomes a Muslim, what now?” is a short video (see below) showing in time-lapse the inner purification of ten young men who have converted to Islam. “Their names are Julius, Roland, Jonas and Michael. Germanisation is taking place,” the Viennese organiser expresses with pleasure about the German converts on Twitter.

Amir El-Shamy is general secretary of the Austrian branch of the organisation Iman, which belongs to the worldwide Dawah movement (conversion to Islam). The four-day workshop, “only for brothers”, in which the contribution towards expenses is €50, took place at the end of August 2019 somewhere in Salzburg’s mountains. The accommodation shown on Facebook seems to be in Tennengau.

The psychologically sophisticated programme aims at creating the experience of togetherness, esteem and orientation — things that young people in a Western consumer society often lack. After the crash course, Kevin reports on the happy feelings he has experienced. The former life of the likeable blond manufacturer from Lower Bavaria included alcohol, party nights and hanging out. Now Kevin knows that this is un-Islamic and haram (bad). 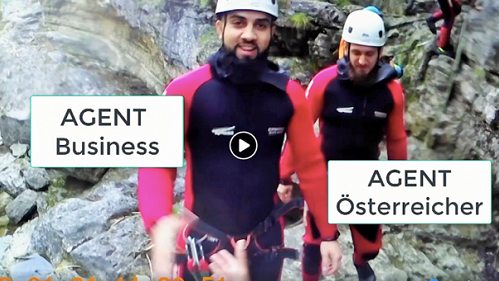 The seminar in the mountains is part of the global jihad (struggle/effort) underway since the 1970s. This extremely reactionary Islam has been carried into the world as a result of the Iranian revolution. According to the US State Department, Saudi sheikhs and Qatar have pumped $130 billion into this struggle over the past ten years. Thus, millions and millions of dollars flowing with the spirit of Islamic Sharia into the construction of schools, kindergartens and mosques in Bosnia. The dress code of these Ultras is long beards and short trousers.

Beginning in January of this year, a leadership team of the Iman movement came to Salzburg to explore locations for canyoning in the Almbach gorge. Among them was the managing director of the umbrella organisation Islamic Education and Research Academy (iERA) based in London. The non-profit employs 36 field representatives, internally called “range specialists”. They build up local networks, organise training camps and collect donations.

Since 2011, £660,000 to £980,000 a year have flowed into the Islamisation company. According to the Annual Report 2018/19, the company is active on six continents, has distributed 391,239 sets of material and converted 4,000 people. The priority for Europe is “the development of a Muslim infrastructure in twelve countries: the Netherlands, Czechia, Germany, Switzerland, Austria, Slovenia, Bosnia, Montenegro, Kosovo, Macedonia, Serbia and Croatia”.

The Prophet’s agents in Austria are Iman’s Turkish-born Managing Director Sertac Odabas and Secretary General Amir El-Shawy. The Floridsdorfer with Egyptian roots became known to a wider public when he transformed himself from a SPÖ youth official and “integration ambassador of the republic” to a religious zealot who at some point began refusing to shake hands with women.

The academically-educated leadership duo is active on Facebook and Twitter, runs a TV channel on YouTube showing their street-dawa, where flyers are distributed and passers-by are involved in conversations that are usually hopelessly cornered with clever questioning techniques. The only exception was an 80-year-old eloquent Viennese who turned the tables, took over the conversation and said that he felt threatened by political Islam.

The video was titled with a quote from the man — “You are retarded! Debate: Islam in Europe” (video below) — which serves as the general reproach for Islamophobia. Another video deals with women’s rights and Western “equality feminism”, which is a aberration. While “our feminism poses the question: How did the Prophet deal with his women”, as El-Shawy explains.

The founder of the Islamic Academy of Education, Anthony Abdurraheem Green, a British convert, admits that he is a bigamist with two wives (and ten children). According to Green in the monthly “Islamic Voice”, this is legally covered by precedents. Green and his movement have repeatedly been accused of hate speech and of spreading “anti-Semitic, misogynistic and homophobic propaganda”. In an online declaration, Austria-Iman distances himself from all violence and extremist ideas. Odabas and E-Shawy did not respond to our requests for comment.