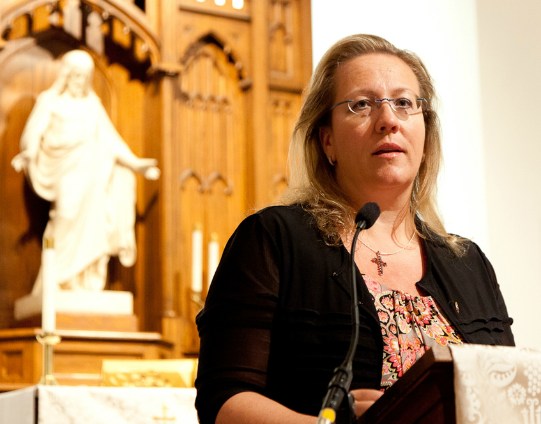 Back in January Elisabeth Sabaditsch-Wolff filed an appeal of her “hate speech” conviction with the Grand Chamber of the European Court of Human Rights (ECtHR). The Grand Chamber has now refused to hear her appeal (the announcement of the decision comprises one line in this press item from the Court).

This was the last avenue of appeal open to her — her conviction had been upheld by the Austrian Supreme Court, and then (after five long years) the ECtHR. There is no higher judicial authority to which she can appeal; her case is now officially closed.

As you can imagine, Elisabeth was hit hard by the news. Here’s the note she sent out to the supporters who helped her pay the (very expensive) legal costs of the appeal:

I am sorry. I did all I could.

Since the current Austrian government is disinterested in doing anything about this tragedy, I am herewith ceasing my work in Austria. I grateful to everyone who supported me in the past decade.

Thanks to the a new project called “Encounter Truth” I will now spread the truth to the American people, at least, to those who still believe in Free Speech, in the First Amendment. There is much work to be done: we all know how much the First Amendment, how much free speech is currently under attack in the United States.

I do not need to stress that I consider this decision to be completely wrong and a serious blow to freedom of expression.

Please pray for Austria, for Europe.

Henrik Clausen, who has worked with Elisabeth and the OSCE team for many years, had this to say about European “justice”:

Elisabeth lost her appeal to the European Court of Human Wrongs — ehm, Rights. The Grand Chamber summarily dismissed the appeal. €45,000 in legal expenses and much hope lost, with the stroke of a pen.

She is of course deeply disappointed by the outcome. This means that the verdict from October stands unchallenged, with no further route for appeal. Thus, the European Court of Human Rights has introduced a “Right not to have religious feelings hurt”, which is as important as Freedom of Expression, if not more.

One has to wonder what kind of imbeciles are now taking care of the highest human rights authority in Europe?

For Elisabeth, this marks the end of her work in Europe. She has good connections and major plans to work in the United States, and is heading for Texas later this week.

Another reason for her chance of focus is that the CSPI [Center for the Study of Political Islam] people have won the battle for influence with the Austrian politicians. They have convinced the Austrian politicians that “Political Islam” is the problem, not Islam as such. From a legal perspective, this will lead to a law against “Political Islam”, while the law on Islam as such (which Elisabeth and Christian Zeitz have struggled to get fixed) will remain unchanged.

A third reason for her ceasing all work in Austria is that her contacts in government let her down when it came to her case at the European Court of Human Rights. When she asked for a public statement of support, FPÖ simply responded: “No. We do not want to offend our coalition partner [ÖVP] with a freedom of expression problem.”

We also discussed our participation at OSCE. We’ve been there for ten years now, hopefully getting to the hearts and minds of people present there, inspiring them to do the Right Thing. We probably caused severe harm to the organisation as such, by using it for its intended purpose, thereby disturbing the leftist imbeciles now in charge of what used to be a very fine legacy. Our guess is that the usefulness of going there is spent, but we’ll not make a final decision just yet.

Things are changing rapidly. The political madness, which we believed could be cured with rationality and reason, seems to survive just about any attack we have thrown at it. In fact, the madness seems to grow ever more pervasive, despite the efforts of good people left and right.

My take: This will get pretty chaotic. So-called “extremist forces” will come into play, now that the moderate ones have been systematically ignored, harassed and persecuted for a decade. Prayer and meditation make sense. Struggling to inspire brave, rational behaviour among the press and politicians no longer does.