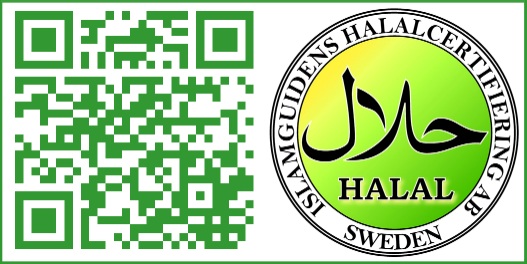 Many thanks to FouseSquawk for translating this article from Katerina Magasin:

How Sweden is Islamized through food jihad. Halal-marked food is sneaked onto consumers.

Halal food has come to Swedish food stores without consumers’ being aware of this. Halal markings are made with very small symbols in Arabic that Swedes cannot read. The question is: Where is the possibility to choose or not choose products when they are sneaked in this way? There can be both ideological and religious reasons for not wanting to buy halal, since Islam is a religion which includes a political system, laws (sharia) and belief in Allah as god. Food jihad, which means Islamization through food, is a strategy used and involves taking over the food so that it becomes Islamic for all inhabitants of the country. The goal is to introduce sharia law, and halal is one of the sharia laws. As the first Swedish newspaper to do so, Katerina Magasin now writes about the phenomenon, which is part of the ongoing Islamization of Sweden. Read Ulrika Stigsson’s expose.

In many Swedish stores halal food is sold without customers’ being aware that they are buying these products with Islamic marking. I decide to go and visit some of our most common grocery stores, ICA, COOP and Hemkop. I find halal labels on the popular Kellogg’s Corn Flakes, Frosties, K-Special and other varieties under the Kellogg brand covering several shelves.

The halal marking is tiny and must be photographed and enlarged to be able to read the Arabic.

I ask the staff at the various stores if they have halal food and they all answer, “No” or “I don’t believe so.” In addition, I find Thai products such as noodles, fish sauce and soy that are also halal certified. COOP has its frozen chicken X-tra and Hemköp/Willys Chicken Eldorado, which is halal.

The Asian food businesses, originating in Thailand have almost exclusively halal-marked products. For many years I have been interested in Thai cooking, and I am a big customer of Asian stores. Now I choose the Vietnamese noodles because I don’t want have halal. That Thailand is 95% Buddhist and only 3.7% Muslim the halal question becomes more interesting. How can a small minority influence and completely dominate the vast majority?

What is halal and why does it end in our goods in Swedish stores? In Islam there are sharia laws and halal is part of sharia. It includes rules that apply to all food and not only meat. Most Swedes associate halal with halal slaughter, and don’t know that it includes much more. Even shampoo, soap and detergents should also be halal if everything is to be right.

When a product becomes halal certified, it usually takes places through a company with approved certifiers. This must be renewed and paid for every year. The purpose is to finance the implementation of sharia law in our society and the income from the certification is a part of this. I found, through a simple search, halalcertifiering.se where several companies that have received certified products are named. Some of the companies are: Ase Glass, Kallbergs, Asta Real, Can Deco, Akzo Nobel and the products are all everything from chocolate sprinkles to medicines.

Halalcerifiering AB markets its services to Swedish companies as purely economic: “Expand your clientele with about 400,000 new customers in Sweden, and with many more when exporting to other countries!” According to a source with good insight, this is a strategy within jihad, Islamization through food, which is applicable when Islam is in the minority. Islamic states do not need halal markings because sharia law already demands that all food sold there be halal.

It is not known how much this industry is marketing. I send an email and ask Axfood about Eldorado chicken and the cost in 2018 for their halal certification? They reply to the email, but not to my question. Furthermore, I have emailed the National Food Agency and asked if it is really legal to sell halal products labeled in Arabic with tiny symbols? They also do not answer my question, but write back with an answer that is not relevant.

Swedish companies begin with halal for economic reasons, and the certification (process) provides revenue that finances jihad throughout the world with everything from Koran schools to the Muslim Brotherhood and terrorism.

I find a halal certificate on a company’s website with the name and the title of the certifier / imam. After a search on Google, the imam pops up but now as SFI teacher, and he has his own website. The homepage is mixed with Quran verses and how to read SFI: www.asigner.net.

It is not just the food that is Islamic, but also the SFI that is financed by state grants through the schoolwork. Different threads lead me from one to the other. Searching further for the halal label, there are products originating in the Philippines which are directly connected to a Koran school. Again, halal is a financier for various forms of Islamization. Follow the money! Swedish companies live in economic symbiosis with the halal industry. Both parties live together, and without knowledge and information, it can be seen as a good deal with increasing profit margins.

Sweden should have a clear law on halal labeling! All markings must be in Swedish with large text on the front of the product. No one needs to be involved in buying products without having made an active choice, which stands for so many things both religiously and politically. Particularly worrying are the sources that are linked to terrorism and the Muslim Brotherhood. How many people at ICA, COOP and Hemköp are aware of this? What makes me shocked is that everyone seems to be asleep on this issue. The National Food Administration, business employees and consumers seem to be as ignorant as everyday Swedes. What also makes it difficult is that there is no uniform symbol but a wealth of certifications with different colors and forms. It should be easy to do the right thing.

Ulrika Stigsson is a writer and Christian public debater.

22 thoughts on “Sweden is Being Islamized Through the Food Jihad”