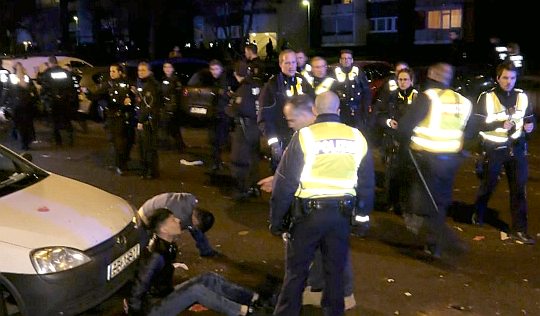 Silvesternacht (New Year’s Eve) in Cologne was a bang-up affair in more ways than one. And no fun for the police.

MissPiggy, who translated the report below, describes the piece as follows:

This is a post written by someone who knows a German police officer. In it he writes about what was really happening on New Year’s Eve in Germany.

Today I spoke with a friend who works as a police officer in Cologne and wants to remain anonymous for understandable reasons.

He told me first-hand how and what he experienced in action on New Year’s Eve.

What he told me draws a completely different picture from what the mainstream press tries to draw.

In the state of North Rhine-Westphalia alone, 38 (!) policemen and -women were injured on New Year’s Eve in action during peaceful New Year’s Eve celebrations, and in some cases have now been incapacitated for longer periods.

Hundreds of colleagues were mobbed, spit on, insulted, beaten and kicked. Even firefighters and rescue workers were victims of almost exclusively “Muslim, Arab and Turkish hordes, which have created in many places civil war-like conditions.” And not only on the so-called Kölnberg.

The so-called “protection zones” around Cologne Cathedral and the central station were hard to hold. A comprehensive control was impossible. In spite of the ban, numerous rockets and guns were fired at people and injured several of them.

The German population, if seen on the streets, were few and far between. Those who ventured out were at the least irritated and at the worst scared or in a panic. And others were filing charges with the police for assault, property damage, insult or sexual harassment. The officers of the Cologne police feel abandoned by Mayor [Henriette] Reker and certify her as having a “below-grade” policy and ivory-tower attitude.

The displeasure and frustration among police officials is growing. Not only in Cologne. Nationally. Nationwide. The colleagues exchange information with each other. Everywhere the same mood and situation picture. Through media coverage, the hypocritical phrase-mongering and the out-of-touch-with-reality politics, one feels let down, fooled and burned. Urgently-needed new police recruits are deterred as a result. With a modest income, you could somehow still survive. However, if you add to that the lack of respect from the upper ranks, and the lies about the facts, then all that’s left is frustration and burnout. Something has to change, and soon.

These conditions are intolerable. For a long time inner peace, which was already more wishful thinking than reality, is no longer able to be sustained. If politicians and the media no longer respectfully pay tribute to the courageous and increasingly perilous work of our police, fire brigades and rescue teams, preferring to twist the truth about daily life and instead propagate their wholesome, colorful world, let us at least as citizens give those who protect us a very big thank-you.

11 thoughts on “Cologne: Not Your Father’s Silvesternacht”