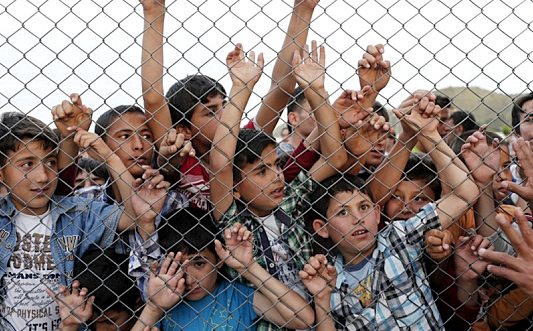 The photo above is a textbook example of the propaganda shots of “refugee” children that the mainstream media have so lovingly created and disseminated to advance the Narrative about immigration.

The whole thing is so obviously staged — clean well-dressed, well-fed boys (notice that they’re all boys?) with their arms carefully placed so that their fingers can desperately grasp the chain-link fence. We can just hear the photographer: “OK, kiddies, line yourselves up there and raise your arms like this. Perfect! Now hold that pose.”

As it happens, my gloss on this photo is not simply paranoia on my part. Due to the ubiquity of cell phones in all the “refugee” camps, numerous instances of staged photos taken by MSM photographers have been documented from separate vantage points that show exactly what was going on. The “journalists” who put these tableaux together may not all be working for the same propaganda service, but they’re all singing from the same hymnal — or rather, reading from the same Narrative of the Great Migration.

The kids in the photo are what the media and our political leaders would like us to believe the migration crisis is all about. However, the migrant “children” who arrive in Europe are far more likely to look like the youngsters in this photo from Vienna:

So what’s the explanation for this disconnect between imagination and reality? How is it that so many millions of people in Europe (and beyond) have been sold such a sleazy, obviously phony bill of goods?

In yesterday’s post from Germany about the fake Syrians who were really fake Ukrainians, a puir wee bairn was central to the story. A puir wee lassie, in this case — the daughter has some sort of debilitating disease guaranteed to tug at the heartstrings of every Gutmensch in the welcoming culture.

The family gamed their way into Germany five years ago, and now their children have been here so long — one was even born in Germany — that it would be cruel to uproot them from their new home and send them back to Ukraine, or Armenia, or Uzbekistan, or wherever they really came from.

The apotheosis of the Puir Wee Bairns motif was reached when a dead baby was photographed on the beach in Anatolia in September of 2015. Little Aylan Kurdi became the poster corpse for the open borders movement in Europe. It didn’t matter that his body had been carefully moved and arranged by the photographer and his accomplices. It didn’t matter that Aylan’s father was the pilot of a boat belonging to the people-traffickers, and had wantonly put his wife and children at risk by including them among the passengers of the boat. It didn’t matter that the father’s goal was to make his way to Canada so he could get his teeth fixed for free under the generous Canadian welfare program for migrants.

None of that mattered. All that mattered was that a puir wee bairn was dead, and we all needed to do something to HELP THE CHILDREN.

Little Aylan was the proximate cause of Angela Merkel’s decision to fling wide the gates of Europe to the entire Third World. Mrs. Merkel — never one to let a crisis go to waste — took the opportunity to make sure that Germany and other Western European countries would be flooded with millions more migrants in addition to the ones that were already pouring in.

Such is the power of the puir wee bairn. This is not a new phenomenon; politicians have been exploiting the theme for decades. Just think of all the times Hillary Clinton has invoked the word “children” to make sure that whatever massive socialist program she wanted to impose would get passed and funded.

Whenever a progressive politician mentions “the children”, it seems to shut down rational thought in his audience. Who could be so heartless as to oppose policies that would help the puir wee bairns?

Yet the process of child-worship is so obviously selective. Just think of all the children who are being raped and murdered — most of them puir wee lassies — by the third-world migrants invited to step over Aylan’s corpse and come on into Europe. All those girls in Britain who were “groomed” and enslaved by their Pakistani pimps — what about them?

They don’t exist. Only the phony refugee children with their fingers in the chain-link fence exist. The rest are tossed into a journalistic oubliette.

Sentimentality about children is nothing new. The Victorian Age is well-known for its cloyingly saccharine images and literature featuring children, both suffering and happy.

Yet Victorian politicians didn’t exploit children to the extent that is occurring now in the early 21st century. What has changed? Why is the general public so much more susceptible to having its collective forebrain shut down by images of suffering children?

I don’t have the answer to that question. It’s possible that gullible sentimentality concerning children increases in inverse proportion to the average number of children conceived and raised within families — that is, couples who have one or zero children are much more likely to swoon over the puir wee bairns than those who have eight or ten.

That’s just a hypothesis, with no data to back it up. And I have no idea how to test it.

But there’s no denying the awesome power of the puir wee bairn in today’s political environment.

The catchphrase used in the title and text of this post was cribbed from a Simpsons episode. It was uttered by Groundskeeper Willie.