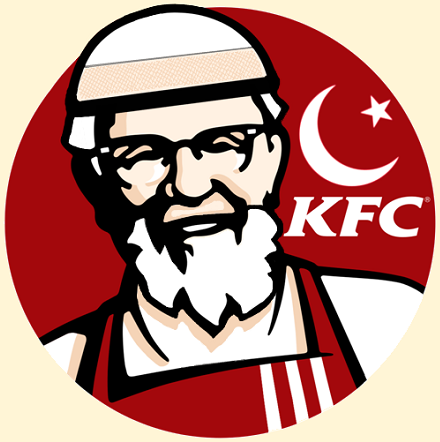 Several Kentucky Fried Chicken (or are they just KFC now? — an acronym with no title reference) restaurants in Australia have made themselves 100% halal, and are therefore no longer offering bacon or any other pork products to their customers.

This story merits further discussion, but first here’s the brief news report from The Daily Mail:

KFC has refused to sell bacon at three Australian stores to keep in line with Halal certified products.

A customer revealed the rule after contacting the fast food company about the lack of bacon offered at a store in Punchbowl, in Sydney’s west.

‘Why is bacon not available at KFC Punchbowl, NSW?’ Disgruntled customer Marc Miller wrote on Facebook.

In response, KFC said the fast food chain’s stores in Punchbowl and Bankstown South in NSW, as well as a location in Fawkner in Victoria, don’t sell bacon to keep in line with other halal products.

‘Hi Marc, currently, the KFC stores at Punchbowl (NSW), Bankstown South (NSW) and Fawkner (VIC) have a number of products which are certified Halal and are available to customers from these stores only,’ the statement reads.

The spokesperson added that there are no current plans to extend the number of stores in Australia which have Halal products.

I ask readers to temporarily suppress their natural and understandable outrage over this news, and consider it as part of a larger process, one that is underway throughout the Western world.

The offering of halal products is obviously a business decision. If you have a lot of Muslims in your customer base, and you see a lot of women in bags and men in dresses in beanies, then you will offer them halal items, because that’s what they want, and that way you will sell more stuff. It is of no moment to you — if you are aware of it at all — that a percentage of the cost of halal products is turned over as zakat to “charitable” organizations, including jihad groups. After all, that’s just part of the cost of doing business.

However, in this case the decision not to offer any non-halal products goes beyond a mere business decision. KFC has at least some kafir customers — obviously, since one of them publicly complained — so the franchise in question could make a greater profit if it continued to include menu items with bacon to satisfy the demand from the kuffar.

Yet they decided to withhold bacon and forgo some of their profits. Why?

I’m not familiar with the demographics of the regions served by these Australian KFC outlets, but I assume they have a significant percentage of non-Muslim customers — possibly even over 50%, if they’re located near a major artery. Yet they decided to please their Muslim customers by labeling their businesses as “100% halal” — the opinion of the kuffar simply doesn’t matter enough to make them decide otherwise.

This is similar to the decision by corporate and government employers in the UK and Canada (and probably lots of other countries in the Dhimmi West) not to allow their non-Muslim employees to eat in the cafeteria during the daytime in Ramadan. The employers want to please their Muslim employees by making sure they don’t see the kuffar eating while the Muslims are faint with hunger.

Once again, this probably occurs in many places where the percentage of Muslim employees is well under 50%, probably less than 10% in some locations.

Why does this happen?

Ideology presumably plays a part, especially in government establishments, which have no reason whatsoever to care about what their “customers” prefer. But businesses normally do take customer preferences into consideration. Yet when the percentage of Muslims in their customer base becomes large enough — 50%? 25%? 5%? Who knows? — they decide to give up a certain percentage of their profits to please Muslims.

I submit that this is done out of fear. By now everyone knows what Muslims do when they are displeased. It doesn’t matter how much the media deny it or cover it up; everyone knows. They also know that there don’t have to be that many Muslims in the neighborhood before their displeasure may become lethal.

Owners don’t want their businesses to be torched. Nor do they want their employees be beheaded — that really has a negative impact on the bottom line.

So they act preemptively to prevent Muslim dissatisfaction. Halal food, changes in dress code, foot baths, the lack of piggy banks — whatever it takes to keep from being firebombed.

I also submit that this process may remain entirely subliminal. It doesn’t have to be on a conscious level. Westerners have been through extensive aversion training, and have become conditioned to tiptoe very carefully around the Religion of Peace. To the point where they don’t even have to think about it.