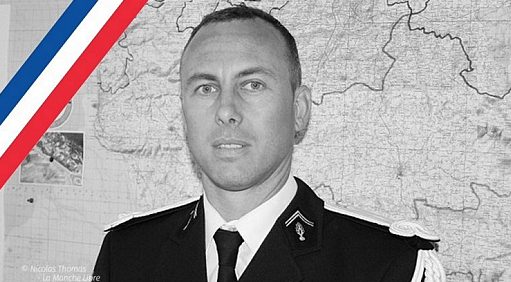 Last Friday an armed mujahid killed three people and took hostages in the town of Trèbes in southern France. Before he was eventually shot and killed by police, Arnaud Beltrame, a colonel in the gendarmerie, offered himself in exchange for the last of the hostages. The mujahid then stabbed Col. Beltrame, and the courageous officer later died of his wounds in the hospital.

The manner in which Col. Beltrame was killed has been suppressed by the news media both inside and outside of France. News stories reported that he was “stabbed”, and some went so far as to add “in the neck”. But the gendarme was in fact slaughtered like a beast in halal fashion: his throat was slit, as required by the Koran.

Below is the first part of an article by Riposte Laïque, published on 26 March 2018 by Jeanne Bourdillon. Many thanks to Oz-Rita for the translation:

Colonel Beltrame was slaughtered like a sheep at the Feast of Eid!

We learn, without surprise, alas, that Colonel [Arnaud] Beltrame died with his throat slit, even if it is a phrase that newspapers are reluctant to use. We had received this tweet from one of our readers on Friday evening, but we hesitated to make it public, fearing a false rumour. Mistake.

A direct reply to [Gérard] Collomb [Minister of the Interior], who lied before the cameras:

“Minister, stop lying to the people with the help of the media. My surgeon brother is the one who received Lieutenant Colonel Beltrame yesterday at the hospital in Carcassonne; he confirmed to me this morning that in reality, he was EGORGÉ [translator: had his throat slit].”

Riposte Laïque then link to an article, dated March 25 2018, from the French Daily Le Parisien, whose headline reads:

Attack in the Aude: Constable Arnaud Beltrame died stabbed in the neck

The autopsy of the gendarme who on Friday substituted himself for the last hostage in the Super U of Trèbes (Aude) revealed fatal knife injuries. The officer was also shot.

The conditions surrounding the death of Lieutenant-Colonel Arnaud Beltrame are becoming clearer. The autopsy on the body of the gendarmerie officer revealed “deadly stab wounds” in the neck, according to corroborating sources. This outstanding officer, whose heroic action was hailed by the head of state, is said to have died from stab wounds to the throat.

He was also wounded by gunfire. His killer, Radouane Lakdim, a 25-year-old jihadist who rushed into the store after shooting motorists and a CRS police officer, was armed with a dagger and a 7.65 small-arms pistol. The constable’s service weapon, a 9 mm calibre, was also found near his body. We still don’t know the exact order of the stab wounds and the shots. The shots provoked the intervention of the GIGN, which, in response, killed the attacker.

At various points inside the store Lakdim had arranged improvised explosives, connected to a triggering system, but they did not detonate.

Autopsy, comprehensive hearings, computer forensics: around a hundred investigators from the Counter-Terrorism Sub-Directorate of the Judicial Police and the DGSI (internal intelligence) are conducting their investigations. Two people are still in police custody in connection with the investigation, in particular for “murders in connection with a terrorist enterprise”, that has been opened, coordinated by the Paris anti-terrorist prosecutor’s office. It is about the companion and a friend of Radouane Lakdim. These key witnesses have not asserted their right to silence: they are responding to the hearings.

Magistrates and police officers no longer have any doubts about the ideological references of the jihadist, since in his apartment in Carcassonne they discovered writings alluding to Daesh (ISIS), which resemble a will. The attack, which killed a total of four people, was claimed by the terrorist group via its propaganda agency. The computer expertise brought to bear in the emergency aims to determine with whom it was associated.

8 thoughts on “The Halal Slaughter of Colonel Beltrame in Trèbes”