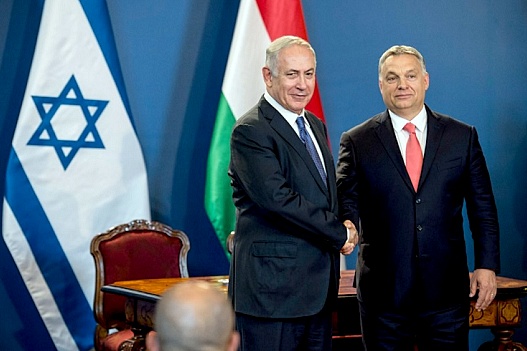 As we reported here last week, Israeli Prime Minister Benjamin Netanyahu paid a historic visit to Budapest and Hungarian Prime Minister Viktor Orbán, culminating in a meeting between Mr. Netanyahu and the prime ministers of the Visegrad Four nations (Hungary, Poland, Czechia, and Slovakia) on July 19.

Der Spiegel is Germany’s progressive “newspaper of record”, roughly equivalent to The New York Times or The Guardian. Egri Nök explains why she decided to translate Spiegel’s oleaginous sneer about last week’s meeting in Budapest:

This Spiegel article on the meeting between Viktor Orbán and Benjamin Netanyahu is an anti-Orbán smear piece. I translated it because even Spiegel to admit that Orbán is not an anti-Semite.

Netanyahu at Orbán’s: “Hello Viktor, nice to see you”

Israeli President Benjamin Netanyahu is Viktor Orbán’s guest for three days. Despite anti-Semitic scandals, both celebrate their ties — they are dependent on each other.

Viktor Orbán’s breach of taboo was just a few weeks ago. At the end of June, the Hungarian prime minister called the former regent Miklós Horthy an “exceptional statesman”. That very same man, who, as an authoritarian chief-of-state in the interwar period, was jointly responsible for the deportation of almost 600,000 Hungarian Jews to German extermination camps.

On top of that there is a smear campaign playing with anti-Semitic ressentiments against the US stock market billionaire George Soros, who is of Hungarian-Jewish descent and who allegedly wants to precipitate his native country into disaster.

It seems that all of this is no problem for Israel’s premier Benjamin Netanyahu. He has been in Hungary for a three-day state visit since Monday, and he encounters Orbán most cordially. “Hello Viktor, nice to see you,” Netanyahu greeted his fellow leader at the reception in front of the Hungarian parliament.

Later, the joint press conference almost became a matey chat — the two premiers happily chatted with each other when they signed two treaties, smiled at each other nonstop, and then verbosely celebrated their ties.

Orbán declared — never mind Horthy or Soros — a “zero tolerance policy on anti-Semitism”, promised the protection of the Jewish citizens of Hungary, and called the Hungarian involvement in the Holocaust a “crime” twice. Netanyahu, on his side, touched the topic only indirectly. He said it was “wonderful” to be in Budapest and thanked Orbán for his help in the fight against “Anti-Semitism disguised as Anti-Zionism”. Both praised each other for their “dedicated patriotism”; questions from journalists were not allowed.

Orbán and Netanyahu met three times on Tuesday alone, the last time of which was for dinner. On Wednesday the Israeli premier will meet his fellow leaders of the Visegrád states — besides Hungary, these are Poland, Czechia, and Slovakia. Netanyahu will stay in Budapest until Thursday afternoon. Among other things, he wants to talk to representatives of the Jewish communities.

It is an historic visit: the last time an Israeli premier was in Budapest was in 1989, before the end of the dictatorship. Relations have been mostly difficult since then, often tense. Under the national conservative as well as under the socialist-liberal governments in post-communist Hungary there were many anti-Semitic incidents and affairs which caused concern in Israel — starting with anti-Semitic manifestations in the first post-communist governmental party to racist, anti-Semitic marches by right extremists, which Orbán’s socialist-liberal predecessors did not ban.

The fact that the Israeli premier now, despite the current incidents, spends three whole days with Orbán, is part realpolitik (practical politics), part true sympathy: Both premiers share the same “robust”, confrontational, partially authoritarian style of governance, they are opponents of liberal democracy, and they have the same arch-enemy in the US stock market billionaire, philanthropist and supporter of non-governmental organizations George Soros.

The Hungarian opposition politician and publisher Attila Ara-Kovács puts it this way: “They are two premiers who are international pariahs. This brought them together and this keeps them together in their weird forced way.”

The publisher László Seres puts it more soberly in the Hungarian weekly newspaper “hvg”: “The Israeli government, on the one hand, likes the fact that the Visegrád states do not tag along in the extensive reception of Muslim refugees, and on the other hand, it is unlikely that they will criticize Israel for its controversial settlement politics.”

In fact, Hungary under premier Orbán, who has been ruling since 2010, has become one of the most consequent supporters of Israel. Orbán is not an anti-Semite. While he sometimes sweepingly attacks the Roma, he does not make any ambiguous remarks about Jews in public. [Is Spiegel insinuating so he makes them in private? — translator]

“A Great Future for the Both Us”

Orbán’s cue that today, in this world, “the patriotic governments are the successful governments” explains how this goes along with his remark about Horthy or his again anti-Semitically toned campaigns [What do they mean by that? If they had evidence they would bring it? — translator]. Orbán probably insinuated by this that their style allows them to go fishing for votes on the right fringe.

The fact that Netanyahu did not robustly condemn the campaign against Soros, but even justified it before his visit, is a disappointment and “unpleasant surprise” for the largest Jewish community organization of Hungary, MAZSIHISZ, said their spokesman András Heisler to SPIEGEL last week. A criticism, that he now repeats: One would feel “left alone”.

Netanyahu did not react to this at all.

8 thoughts on “Spiegel’s Take on Netanyahu and Orbán”