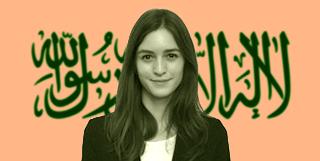 I have a few points to make about the recent (and notorious) Guardian hit-piece on the “far right”, but first let’s look at what Tommy Robinson has to say about the media campaign against him, of which the Grauniad article is only a small part:

The following link for Tommy’s book Enemy of the State is for the Kindle version, because that’s all you can get on the American Amazon site.

Dymphna checked the stats on Amazon.co.uk, and Tommy’s book is indeed #1 in Sociology, and #9 in Biography. It’s selling well in part because of the concerted attacks by most of the British media against him and other “right-wing extremists”. And, as it happens, that’s one of the major issues that sticks in the craw of The Guardian: the persistent popularity of Tommy Robinson.

The Grauniad has done hit-pieces against us in the past, and I originally intended to ignore this latest one. The article contains nothing worth noting — it is spun out of fluff and gossamer, and conveys no substantial information. A one-sentence summary would cover it: “Right-wingers are bad, and we need to shut them down by any means necessary!”

However, Tommy’s video (and some of his tweets) made me look into the article a little more closely. With the help of Egri Nök, who did extensive research into the German and Chinese angles, the author of the hit-piece turned out to be an interesting character indeed.

But first, let’s look at the article itself. It was written by a young lady named Julia Ebner, and is entitled “The far right thrives on global networks. They must be fought online and off”. Below are some relevant quotes:

…The Metropolitan police even warned that the threat from far-right groups is as severe as the jihadist threat.

British “counter-jihadis” have stepped up their cooperation with American alt-righters, French and Austrian “identitarians” and even German and Polish neo-Nazis. This is the paradox of modern-day nationalists: they capitalise on the opportunities of globalisation to spread their anti-globalist views globally.

It is within this context that EDL founder turned Pegida UK leader Tommy Robinson features prominently on Alex Jones’s conspiracy theory show, Infowars, and receives support from American alt-right leaders Robert Spencer and Pamela Geller. Platforms such as Gates of Vienna, the FrontPage Mag and Jihad Watch provide outlets for all of them.

That the far right has moved from the fringe into the mainstream demonstrates the massive support that white supremacist movements have attracted from digital natives. Their online followership often exceeds that of mainstream political parties: with over 200,000 followers, Tommy Robinson’s Twitter account has almost the same number of followers as Theresa May’s.

To prevent radicalisation, hate crimes and violent extremism, we will need to tackle the source of reciprocal radicalisation: the vicious circle of hate driven by “us against them” narratives. Disbanding groups and removing extremist online content is the first step. But, more importantly, we will need to strengthen civil society-led efforts to dissect binary world views and replace them with credible, more nuanced alternatives.

Take note of this juxtaposition:

That is, she conveys the message “Tommy is a neo-Nazi” without actually saying it.

But there’s more to be gleaned from looking into the young lady who wrote the piece.

A VICE News interview (in German) tells us that Julia Ebner is 25 years old. Despite her tender age she is Senior Researcher — not a senior researcher, mind you — at the Quilliam Foundation:

Julia holds an MSc (Dist) in International History from London School of Economics and an MSc (Dist) in International Relations from Peking University. Her research on Chinese politics was published by various think tanks such as The European Institute for Asian Studies and peer-reviewed journals such as Resources Policy. Julia speaks German, English, French, Spanish and Mandarin.

Her blurb at Quilliam led me to FATE, “Families Against Terrorism and Extremism”. According to FATE’s “About” page:

Welcome to FATE (Families Against Terrorism and Extremism), a family of organisations dedicated to bringing about a better future — by keeping families together. The threat posed by extremists and their narratives is tearing families apart. Too many of our sons, daughters, brothers and sisters have been lost to pointless and hateful ideologies. Enough is enough. It’s time to stand up to the hate.

Our aim is simple: to be there for each other. To stay strong. To make a difference in our communities and to keep our families together. From setting up and running CVE campaigns to hosting events and giving advice, FATE welcomes and works together with charities and organisations looking to turn the tide of recruitment and take a stand against extremism.

That is: we’re looking at a “Countering Violent Extremism” (CVE) operation, direct from the OIC/Muslim Brotherhood to Quilliam to The Guardian.

To get the flavor of the CVE meme, check out Ms. Ebner’s TEDx talk, “How far right and Islamist extremists amplify each other’s rhetoric”. You’ll notice that she has a fairly thick mitteleuropäische accent — she was born in Austria. In fact, she’s only been in London for two years. Nevertheless, despite her youth and her recent arrival in the Anglosphere, she’s Senior Researcher at the Quilliam Foundation.

How did that come about?

a 2-year full-time academic program of MIR at the School of International Studies, a master’s degree in International Relations will be granted by Peking University upon completion of required credits, a degree thesis, and an oral defense

In 2014 Ms. Ebner wrote a briefing paper for the European Institute for Asian Studies (EIAS):

As a matter of interest, here’s a history of her school from the Beijing University info:

From the VICE interview, translation by Egri:

This obviously refers to the master’s earned in London. Her “now-boss” is presumably Maajid Nawaz of the Quilliam Foundation.

Her graduate studies were focused on “political Islam, the emergence of the modern state of Iran and Chinese politics,” according to ZeeCompanion, which seems to be a UK-based network of “Asians”.

A more extensive CV may be found at RocketReach:

She started off by studying Betriebswirtschaftslehre, Economics; that is what everyone in Germany and Austria studies if he knows he wants to make a career, but does not yet quite know how. Normally these people are completely apolitical. But there’s an Erasmus Exchange Semester — that is an EU organization, meant to strengthen the EU spirit.

She says the “Nazis” (that is, the Counterjihadists) need to be “fought online and offline.” People in Germany use sentences such as that as justifications to burn AfD cars, vandalize Pirincci’s home…

On German public TV in March of this year she commented on the vehicle jihad in London. She said what they always say: that the true goal of the “extremists” is to divide us from each other. She blames the right-extremists in Birmingham and all across Europe for the “Islamic extremists”, because they agree with each other in their “binary worldview”.

That’s the CVE narrative. To combat “extremism”, it’s necessary to take out the right-wing extremists, because their extremism feeds into and intensifies “Islamist extremism”.

It’s a shrewd tactic. And it’s been very effective so far.

The above summary is just the tip of the iceberg concerning Julia Ebner, the Quilliam Foundation, and the Grauniad. Doughty sleuths may want to use these links to dig more deeply into the background and context of Ms. Ebner and her devotion to the CVE narrative.