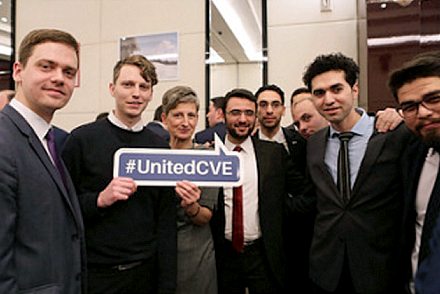 A decade or so ago the Organization for Security and Cooperation in Europe (OSCE) was still a champion of civil liberties and free expression.

The OSCE was formed during the Cold War (as the CSCE) to challenge the Soviet Union to engage in truth-telling. It could rightly claim a share of the credit for prompting the push towards glasnost that eventually dissolved the U.S.S.R. With its headquarters in Warsaw, where memories of Soviet repression remained fresh, the OSCE managed to hold onto its mission for more than a decade after the Iron Curtain disappeared from Europe.

An alliance of globalists and Muslims gradually has infiltrated and subverted virtually all the institutional components of the OSCE. To achieve their disparate ends, both subversive groups have been using the same weapon: Politically Correct Multiculturalism, a.k.a. Cultural Marxism. PC/MC is an effective tool for sapping the civic will among well-meaning Westerners to maintain a commitment to free speech. With its goal of eliminating “racism”, “xenophobia”, and “intolerance”, an illiberal political culture has formed at the OSCE that is diametrically opposed to the principles of those who founded it.

“Countering Violent Extremism” (CVE) is simply the latest component of the Cultural Marxist Narrative. It was concocted by an alliance between Islam and the Globalist Left as a means to suppress dissent and block any criticism of Islam. Pushed by the OIC at the UN, it has trickled down into other transnational institutions such as the EU and the OSCE. Under the Obama administration, CVE was adopted wholeheartedly by the U.S. government, and became official American policy (it remains to be seen whether the Trump administration will dismantle CVE in any significant way).

CVE tells us that by focusing on Islamic terrorism we are engaging in several doubleplus ungood forms of behavior:

When you scrape off all the globalist PC gobbledygook, the above, in a nutshell, is the essence of CVE.

The net effect is to rule all discussion of Islam off the table. This removes the tether that attaches “extremism” to any concrete ideology, and makes it into a free-floating constellation of behaviors that just appear out of nowhere and somehow inexplicably “radicalize” people, causing them to engage in violence for no discernible reason.

I’ll offer some practical suggestions for strategies to counter CVE, but first let’s look at how the doctrine of CVE has infested the OSCE.

The Organization for Security and Cooperation in Europe has dedicated an entire section of its website to “OSCE United in Countering Violent Extremism”. To show how hip it is, it even has a hashtag: #UnitedCVE

We must all rise to the challenge of responding to the corrosive appeal of violent extremism by promoting tolerance, mutual respect, pluralism, inclusion, and cohesion.

Notice how vague and squishy those positive characteristics are. We don’t know exactly what they are, but it sure makes us feel virtuous to promote them!

The negative characteristics are at least as ill-defined, especially “hate”. Take a look at this official OSCE video, “Say NO! to Hate Speech”:

There are a number of other videos (example: “Comics For Positive Change”) to help the neophyte understand the nature and importance of CVE.

Here’s the official description of the #UnitedCVE campaign:

Terrorism is a crime that has no justification, and it should not be associated with any race, ethnicity, nationality or religion. No state can counter violent extremism and radicalization that lead to terrorism alone: we must co-operate at all levels.

To underscore that we at the OSCE stand together as one in countering violent extremism that leads to terrorism, the OSCE Secretary General and the OSCE Serbian Chairmanship have launched the “OSCE United in Countering Violent Extremism (#UnitedCVE)” campaign.

We must all rise to the challenge of responding to the corrosive appeal of violent extremism by promoting tolerance, mutual respect, pluralism, inclusion, and cohesion.

The OSCE’s 57 participating States and 11 Partners for Co-operation are determined to prevent and combat terrorism, in all its forms and manifestations, while upholding human rights and the rule of law. But we need everyone on board to make it happen. Let’s speak up together loud and clear for peace and security!

I could spend weeks fisking these four paragraphs of slippery propaganda, but I’ll confine myself to part of a single sentence for now: “Terrorism… should not be associated with any… religion.”

But what if it is?

What do you do if, despite those bland assurances, terrorism does happen to be associated with a religion?

What if terrorism is associated with one particular religion to such an extent that violence by any other religion is dwarfed into insignificance by comparison?

What if all the data available point inexorably to the conclusion that more than 99% of violent acts committed in the name of a religion by adherents of that religion are committed by Muslims in the name of Islam?

Well… According to the diktat embraced by the OSCE, you must not talk about the massive incidence of Islamic terrorism.

The topic simply may not be discussed. It has been ruled off the turf. Anyone who refers to it is prima facie guilty of “hate speech”, and may be subject to disapproval, shunning, professional sanctions, and possibly even prosecution.

That’s what CVE is all about.

It might as well stand for “Compulsory Vitiation of Evidence”.

How to Counter “Countering Violent Extremism”

The issue with CVE is similar to the issue of the word “Islamophobia”: a lack of officially and legally recognized definitions of the words used.

Four years ago the Counterjihad Collective tackled the growing use of the word “Islamophobia” at OSCE events and in OSCE materials. In the plenary at the Warsaw conference that year we demonstrated that the word was completely undefined, and therefore had no business being used in official documents, especially not when those documents were being used to justify the curtailment of freedom of speech. Our efforts eventually bore fruit — “Islamophobia” has not completely disappeared from the discussions and papers, but its usage has been reduced, and it is rarely emphasized when calling for official action.

The same process might be initiated for Countering Violent Extremism. The only well-defined words (in a legal sense) being used in these descriptions are “violent” and “violence”.

What, for example, is “extremism”? The word “extreme” is not a stand-alone concept; it is an intensifier used to modify nouns or other adjectives, similar to “very”. The word “verism” doesn’t make any sense. Why should we consider “extremism” to be any more meaningful?

“Extreme” and “extremism” have no utility unless they accompany meaningful substantives. For example, the phrases “extreme nationalist” or “nationalist extremist” have meaning, and it might be possible to define them in a useful way.

The real issue, of course, is the phrase “Islamic extremism”, which has been ruled off the turf. We are obliged to eliminate the word “Islamic”, leaving “extremism” to stand all by itself. Which is absurd — without a substantive companion, it has no meaning whatsoever.

And what about “hate”?

Hatred is a feeling, a passion held in the heart. It is not visible, audible, or tangible, and has no observable characteristics unless it is expressed by the person who holds it.

This makes the phrase “hate speech” a nebulous concept, one that is easily manipulated to serve an ideological purpose for the dominant political agenda. If I am in a position of power, and I don’t like your opinion, I can construe it as “hateful”, thereby causing you to be ostracized, fired from your job, and/or prosecuted.

These are just two examples of ill-defined terms that are employed indiscriminately for pernicious political purposes. Undefined or ill-defined terms should especially be avoided when the use of those words is intended to deprive people of their civil liberties — which is exactly the opposite of the purpose for which the OSCE was founded.

We’ll be reporting more on these and similar topics in the months ahead as the time for the annual OSCE HDIM conference in Warsaw approaches.

21 thoughts on “Countering the CVE Narrative at the OSCE”