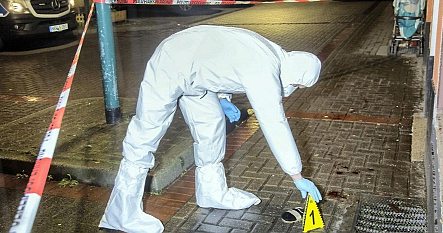 Violence erupted on the streets of Duisburg on Easter Sunday evening, and a teenaged boy was killed. The article below does not discuss the ethnicity of either victim or perps, but it was almost certainly enricher-on-enricher violence.

Egri Nök, who translated this report from Express.de, includes the following note:

This happened in Duisburg-Marxloh, in North Rhine-Westphalia. You would have to search to find a German there. The few grandmas remaining are probably barricaded in their homes on a Sunday night.

Lauren Southern recorded a video report from the same district, and it provides a good overview of what the area is like.

Easter Sunday on an open street: Boy (15) killed with knife and axe

[photo caption: The homicide division is securing traces of blood on the Henriettenstraße in front of the victim’s house. Photo: Christoph Reichwein]

Duisburg — The sidewalk on the Henriettenstraße in Marxloh is covered with blood. It is the blood of a 15-year-old, who was chased and grievously wounded by several perpetrators around 11 PM on Easter Sunday, and died in the ER in hospital. Bloody Easter in a heavily burdened problem district of Duisburg.

The father who tried to save his boy from the mob was wounded just as badly as another helper. The mother managed to pull her boy into the hallway before the mob fled, and the emergency rescue was called.

[photo caption: A 15-year-old boy was attacked by several perpetrators on Henriettenstraße in Duisburg-Marxloh on Easter Sunday around 11 PM. Photo: Christoph Reichwein]

At the scene, police secured an axe. A homicide division is now investigating with which weapons the boy was attacked and shortly thereafter succumbed to his severe injuries, but they are met with a wall of silence.

Police immediately deployed a squad of a hundred, secured the scene, and pushed back the onlookers. Investigators cordoned off the house of the boys’ parents with a red and white band, and marked the blood and evidence with numbers.

The atmosphere became stirred up, was tense and aggressive. Groups yelled at each other; a disturbance was imminent, but the police managed to keep it down with strong forces and dogs.

One eyewitness voiced his opinion that the boy possibly was victim of one of the family quarrels which are frequently conducted on the open street in Marxloh.

Police and the General Prosecutor did not want to comment on the cause of the pursuit of the boy, nor on the state of the investigation.

Again and again, feuds flare up in the district

With its 20,000 inhabitants, Marxloh is one of the most problematic districts. Every second person does not have a German passport. Every third receives benefits. The churches provide for 1,000 needy people every week.

The town, and volunteers of many national backgrounds, try to assist people in the quarter, where many migrants live, and to mediate. Again and again, feuds flare up.

One thought on “Blood on the Streets in Duisburg”