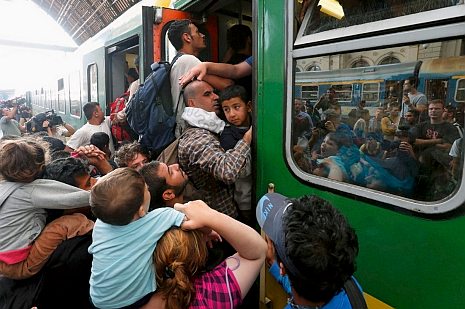 Karoly Lorant is a Hungarian engineer and an economist. More than a decade ago, when he was a member of the European Parliament, Mr. Lorant wrote a careful analysis of demographic trends in Europe that are leading the continent inexorably towards a Muslim future.

The article below is a follow-up examing the current state of affairs eleven years later. Given the “migration” crisis that has been underway in Europe for more than a year, the original article is more relevant than ever, with the process of Islamization well underway.

The referenced document, “The demographic challenge in Europe” by Karoly Lorant, Economist, Brussels (April 2005) is here.

Many thanks to CrossWare for translating this article by Karoly Lorant from Magyar Hírlap:

“In German politics a strong conflict exists. What looks logical for its leaders endangers their voters.”

Somehow I had nothing to do in December 2004 in EU Parliament, so I decided to create a demographic model of the European Union. Of course there are official institutions that make such calculations, but my model’s special purpose was to separate the population into Muslim and non-Muslim components. This falls far outside political correctness, and official demographers were afraid to do this, at least in public.

The model itself was an Excel spreadsheet, and the demographic changes in the population were shown in five-year age groups in such way that for example a 15-19 year age group moved into the 20-24 group. I included the age-specific death rate; the women had kids based on their age group, (boys and girls) who were actually put into the 0-4 age group.

The model then was modified to include incoming and outgoing migrations. The key question of the model was to determination of Muslim population parameters (population age groups, age-specific death rates, and in the case of women, the fertility rate), because this type of statistic does not exist in Europe, thanks to political correctness. In the end I solved the problem by looking at the country of origin for statistical inputs and tried to assess the data from there. For the future all data element was adjustable so, with this publicly available model everyone based on their own convictions could calculate the demographic future of Europe.

When I wrote an essay, “The Demographic challenge in Europe”, and I showed it to my colleagues, they were afraid to take a stance, even though we were a Eurosceptic group that included Nigel Farage (who became famous spearheading Brexit). Finally the Italian colleagues who were managing our home page posted it without asking anyone’s permission, and even today it is still available there.

To make useful my (“now official”) essay I visited the building next door where the Europe’s World magazine was printed in 25,000 copies. They either found the essay too large or myself too small, but they refused to publish it. After some time they called me up, because Klaus Regling of the Director of European Committee — Financial and Economical Directorates wrote an article about the aging of Europe, and they wanted me to write a 600-word summary. I wrote that, bringing attention to the fact that, looking at present tendencies in Western Europe, by mid-century we will have a Muslim community with a population of 70-80 million. Also within the same interval that separates Napoleon and Wellington’s time from today, “homo europensis” will be extinct.

The reason for the extinction, due to cultural and other factors, is the fact that the age-specific fertility rates of twenty-something girls have drastically decreased, and they are not making up this difference even in their thirties. (This tendency can be seen very clearly in data from the 40-year-old age lines collected in Norway). Regling’s PC article with my summary was finally published in the February 2006 issue of Europe’s World.

The next instance was in 2009 when Adrian Michaels, the Editor of Foreign Policy at The Daily Telegraph, contacted me, asking my permission to quote from the essay I wrote for the EU Parliament. This overstated the significance of my little essay, as I originally wrote it to fulfill my own curiosity, and Martin Schulz, the President of European Parliament, would lose his marbles if he were to find out what is on that web page.

Michaels’ article was published on August 8th, 2009 with the title: “Muslim Europe: the demographic time bomb transforming our continent”. The article was referenced by many newspapers all over the world. Based on the events of last year and this year, it is worth quoting his article’s first sentence: “Great Britain and Europe ignore this demographic time bomb. Migrants into the EU that include millions of Muslims will change unrecognizably the face of continent in the next two decades, and none of the politicians is talking about it.”

Michaels also stated that at that time the polls showed no fears yet of the radicalisation of European Muslims, but for the second and third generation integration is harder than for their parents. The Muslims had not yet formed parties (today that is no longer true), but some American security studies were already discussing how the United States’ Middle East policies will be affected when its traditional allied countries have significant Muslim populations.

From a demographic model one can bring out many different and conflicting results by changing its parameters, but one thing is certain: with present trends unchanged, some Western-European countries will have a Muslim majority by the second half of the century. For me, while I was creating my model — influenced by the street view of Brussels — the question was and still is: how will this change happen?!

Even today is very clear that Muslims living in the major cities of Western Europe will isolate themselves, and more and more they want to live based on their own culture (language and law). Based on present trends, these growing Muslim enclaves will provide the majority of the population. It is hard to imagine this changes will happen without violent conflicts, and it is very possible that Western Europe will become the location of heavy ethnic violence.

The Daily Telegraph, where Michaels’ article was published seven years ago, in its August 7th issue published an article by Stephen Green, who writes about the very same topic. His article’s title already gives it away: “The politics of national identity”. This topic, taboo for the longest time, is now more often on the agenda in Germany.

Green’s opinion is that there is a serious conflict in the German politics. What looks logical for its leaders — the policy of “open doors” — will endanger the identity of a large portion of their voters. Too many immigrants suffer from the identity conflict resulting from the poisonous mix of lack of roots and rejection. Many of them feel a threat to their identity by the foreign culture of the new immigrants, who competing with them for their jobs. As a result one action will justify too often another one. Green’s final conclusion: “For whom life is hard, resentfulness will turn into violence, because they have nothing to lose!”

From all of the above — in my politically incorrect opinion —only one conclusion can be drawn for Hungary: Resist to the bitter end to the politics of migration, because if we end up with enclaves of foreign (Muslim) cultures in our country, Islamization will be unstoppable, and it is only a matter of time before we experience the same types of conflicts that already characterize Western Europe, and of which there will be more in the future.