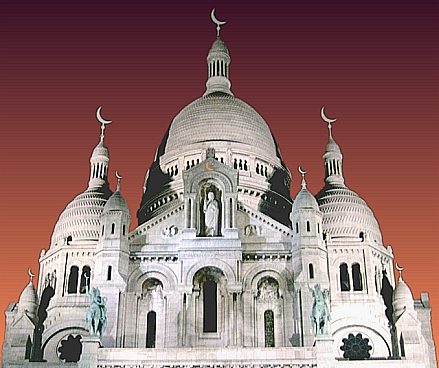 Christianity in France is dying out, and Islam is growing. Churches are being closed and knocked down, while more and more mosques are being built.

Many thanks to Ava Lon for translating this brief article from the Polish outlet Niewygodne.info.pl:

Sign of the times: Since 2000 France has pulled down 33 Christian churches. In their place they erected more than one thousand mosques

The Muslim community in France consists of 5 to 7 million people. One thing is for certain — during the coming years, this community will grow. A sign of the times: in France, Christian churches are being closed and torn down . Since 2000, 33 such buildings were razed. In their place, new mosques spring up, like mushrooms after rain. In the same period, a little more than one thousand were built. Is the most secular country in Europe likely to become the largest Muslim country in Europe?

Yesterday the media were showing images of the pacification of the faithful gathered in the church of St Rita in Paris, the faithful who defended the temple from demolition. Unfortunately, in the coming years, we may see more of these images. Since 2000 France has pulled down 33 Christian churches. In their place, like mushrooms after rain, mosques are appearing. This is a natural consequence of the fact that there are fewer and fewer Christians in France. They are being replaced by Muslims, who currently form a community of 5 to 7 million (depending on whether we are talking about official or unofficial data).

The Muslim community will undoubtedly grow. There are at least two reasons — the first is their fantastic birthrate. The fertility of Muslim women is much higher than that of any other group. The second reason is immigration. Many of the immigrants coming to France believe in Allah. Thus, if there are to be more of the followers of Islam in France, why shouldn’t more mosques be built?

In this context, it is worth quoting the words of Dalil Boubakeur, the dean of the Great Mosque of Paris, who at last year’s convention of the Union of Islamic Organizations of France (UOIF) demanded a doubling of the number of mosques in France: “We have 2,200 mosques, and we have to double their number in two years,” he said during the official speeches. In order to justify his request Boubakeur noted that these 2,200 mosques are not enough for the largest Muslim community in Western Europe. I wonder whether the European Union will be able to somehow subsidize this project?

9 thoughts on “Coming Soon: The Mosque of Sacré-Cœur”