The following article from Politically Incorrect is a fitting follow-up to the video posted earlier today about the dhimmi Church of France. This time, it’s the dhimmi responses of the leadership of the Evangelical Lutheran Church to the destruction of the interior of one of their churches by an Afghan culture-enricher.

May thanks to Nash Montana for the translation:

Hamburg: Afghan destroys inside of church

It happened a week ago, but since the police kept the incident under wraps and the church didn’t press charges, we only now find out about it: A 19-year-old Afghan stormed into the church in Hamburg last Friday evening around 7:20pm, during an open community evening; he overturned chairs and benches, threw a rack with Bibles to the ground, which made the glass on the rack shatter, and he threw songbooks to the ground. According to a witness, the worshippers who were present were very afraid and just let him continue. No wonder, he was wearing a flowing Islamic garment, under which an explosives belt could easily have been hidden. 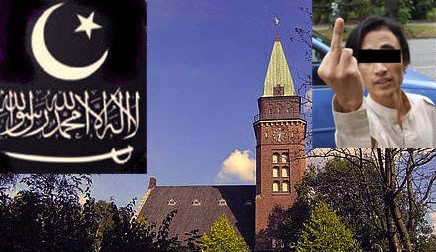 Update: A picture of the attacker and an eyewitness report. And when he was asked why he did it, he yelled: “Because I am Muslim!”

The Muslim didn’t speak during his rampage, and he also didn’t have any connection to Salafists, and therefore the department of state security of the land office of criminal investigation in all earnest says that they do not assume an “Islamic” motive. It is inconceivable just how little knowledge there is in these circles about Islam.

Update: Eyewitness Peter H., who took the picture of the Afghan attacker, asked him in front of the church in Hamburg-Eilbek, after the man was done with his rampage, why he did it. The Afghan yelled his answer: “Because I am (a) Muslim!” Peter H. told this to the police on multiple occasions. It is incredibly outrageous that the police ignored this important information and did not make a report about this scandalous incident. It goes to show again and again that the police very obviously take their orders directly from the government to hide and omit as many incidents as possible that have any connection to asylum seekers, so-called “refugees” and Muslims.

The fact alone that he is Muslim shows his Christian-hostile motive: Christians are cursed in the Koran (sura 9, verse 29), they are vilified as “evil creatures” (98:5), one should never take them as friends (5:50), but instead fight them (9:28), until Islam has gained the victory over all other religions (48:27).

The hammer: This Afghan Muslim was known to the police for several incidents of causing bodily harm. He first became a delinquent in Hamburg as a 15-year-old and as a consequence was sentenced to multiple so-called “disciplinary measures” such as “social studies” (whoa!). In the past year he was looked after by a “juvenile court aid”.

Just imagine for once what would happen in this country if 19-year-old Max were to vandalize the inside of a mosque in this way: The chain of lights would go from Flensburg to Garmisch, our spineless politicians would stand in line in front of the mosque to utter their statements of shock and dismay, and the media would outdo themselves with warnings of a new “crusade” of the supposedly aggressive Christendom against such a peaceful Islam.

The crowning: The churches in Hamburg decided to forgo taking increased security measures. This was “a terrible single incident” but the level of threat in Hamburg has “not changed”, says Remmer Koch, speaker of the Evangelical Lutheran Church district Hamburg-East.

Even the larger church districts were prompted to retain the “openness” of the Christian church. “A house of God is a location that stands for peace and brotherhood; any kind of violence does not fit this stance,” says Karl-Heinrich Melzer, deputy bishop in Sprengel Hamburg and Lübeck.

Well, Herr Bishop, that is so nice for the Christendom, but you are obviously overlooking the fact that violence in Islam is inherently a part of their “religion”. With your pacifism and your refusal to take a fighting stance, you and your sheep are doomed to go down. You obviously do not know with whom you are dealing. Just a single look at the 57 Islamic countries with their massive persecution of Christians and mass killings should open your naïvely blinded ‘Gutmenschen’ eyes. It is also a threat to stupidity to read the most dangerous book in the world. It is known as the Koran.

These pious church people will probably only slowly wake up from their comatose state of suppression once one of them gets his head cut off like in France. State security itself doesn’t see any “concrete evidence for a specific threat for churches and church interiors”, as the Hamburg Abendblatt reported.

The simple presence of thousands of Muslims in Hamburg, among them many “refugees” from fundamentalist-oriented Islamic countries, in which Christians are fair game, should indeed speak for an acute threat. But Germany is slumbering in a naïve Gutmenschen twilight sleep until the Islamic apocalypse really starts. Everything that has happened up until now is merely a lame intro for that which still is ahead of us.

16 thoughts on “Why Destroy a Church? “Because I am Muslim!””