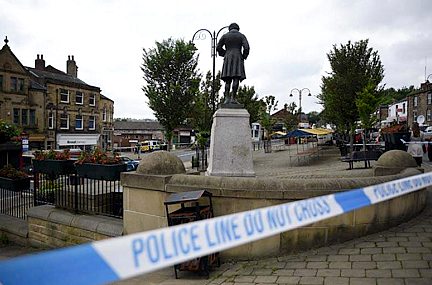 At the risk of boring everyone to tears by asking the bleeding obvious, why does the liberal-left try to link the “right wing” to the murder of British MP Jo Cox, whilst fanatically disassociating Islam from any act of Islamic unpleasantness, be it anti-Semitism, homophobia, misogyny, terrorism, supremacism, subversion, beheading, electoral fraud, gang-rape, slavery, honour violence, infanticide etc etc etc?

The double standards involved here are simply jaw-dropping. Most of the Islamic downsides mentioned above can be directly linked to the scriptures of Islam, but left-liberals will deny this until their last pseudo- sanctimonious breath. And, as far as I am aware, there are no “right-wing” groups in the West which command members to murder their political opponents, yet left-liberals will go to the most extraordinarily wicked and immoral lengths in their attempts to link just such a scenario.

The horrible murder of Jo Cox is apparently now being blamed on Nigel Farage and his anti-immigrant campaign poster. The blame is being directed toward those who wish to leave the European Union, and of course on the political party / street movement Britain First based on hearsay evidence that was later retracted. The term “hate” keeps on cropping up, as though the lunatic who murdered Mrs Cox was the product of some trained political movement rather than a lone wolf with psychiatric problems.

There are any number of witless articles springing up about Jo Cox, but I want to look at two in particular, simply because they say so much about modern Britain and so little about the genuine threats Britain faces both today and in the future. The first article is from the Guardian and disgorges the following statements:

Jo Cox was an MP driven by an ideal. The former charity worker explained what that ideal was as eloquently as anyone could in her maiden speech last year. “Our communities have been deeply enhanced by immigration,” she insisted, “be it of Irish Catholics across the constituency or of Muslims from Gujarat in India or from Pakistan, principally from Kashmir. While we celebrate our diversity, what surprises me time and time again as I travel around the constituency is that we are far more united and have far more in common with each other than things that divide us.”

This was no random event, and the police are investigating reports that the assailant yelled “Britain First” during the attack. This is not merely a chauvinist taunt, but the name of a far-right political party… the thuggish outfit denounced Ms Cox’s murder, as it was bound to do. But their brand of angry blame-mongering could very well serve to convince particular individuals that some people are less than human, and thus fair game for attack.

The slide from civilisation to barbarism is shorter than we might like to imagine. Every violent crime taints the ideal of an orderly society, but when that crime is committed against the people who are peacefully selected to write the rules, then the affront is that much more profound….The idealism of Ms Cox was the very antithesis of such brutal cynicism. Honour her memory. Because the values and the commitment that she embodied are all that we have to keep barbarism at bay.

There is a lot to be said about all of this vapid and dangerous rubbish, but bear with me a moment and take a look at some excerpts from the second article I want to talk about, which was penned by Alex Massie in the Spectator Magazine:

The poster unveiled by Nigel Farage this morning marked a new low, even for him. The mask — the pawky, gin o’clock, you know what I mean, mask — didn’t slip because there was no mask at all. BREAKING POINT, it screamed above a queue of dusky-hued refugees waiting to cross a border. The message was not very subtle: Vote Leave, Britain, or be over-run by brown people. Take control. Take back our country. You know what I mean, don’t you: If you want a Turk — or a Syrian — for a neighbour, vote Remain. Simple. Common sense. Innit?

And then this afternoon, a 42 year old member of parliament, who happens — and this may prove to have been more than a coincidence — to have been an MP who lobbied for Britain to do more to assist the desperate people fleeing Syria’s charnel house, was shot and stabbed and murdered.

When you shout BREAKING POINT over and over again, you don’t get to be surprised when someone breaks. When you present politics as a matter of life and death, as a question of national survival, don’t be surprised if someone takes you at your word. You didn’t make them do it, no, but you didn’t do much to stop it either.

OK, let’s take the Guardian article first, which clearly thinks in terms of supposed idealism that the growing presence of Islam in Britain is a good thing; that if you disagree with this you are evil and that if barbarism is to be kept at bay we should support Jo Fox and reject political parties which think Islam presents a clear and growing threat.

The values and commitment so glowingly attributed to Jo Cox by the Guardian are in reality the commitment (however well-intentioned) to strip Britain of her culture, traditions, history and people, and to replace them with a people, culture and ideology from the 7th century in terms of real, genuine barbarism. Exhibiting sanctimonious virtue toward Muslims is ALL that matters in left-liberal land you see, whilst the future and the feelings of the native English merit no consideration at all. But this is most certainly not the “idealism” shared by the majority of this country, even if it encapsulates the Guardian class.

The Spectator article penned by Alex Massie apportions the murder to the “right-wing” in general but singles out Nigel Farage in particular for his temerity in suggesting (quite rightly) that it is perfectly reasonable for Britain to stop importing people from an utterly alien culture and civilisation who fanatically subscribe to a religious ideology that has no intention of co-existence and every intention of total, brutal domination.

Alex Massie suggests it is hysterical to present politics as a matter of life and death and national survival, but suppose that is exactly what politics has become in the second decade of the 21st century? What can only be the logical consequences of a demographically dying Europe, which unasked and against its will was forced to accept a demographically exploding culture and people with a history of fanatical enmity toward Christian Europe? Unless human nature is no longer human nature, and unless history never repeats itself, and unless inter-ethnic, inter-religious warfare is 100% a thing of the past, then surely this is about life and death? Surely this is about national survival?

The two articles I mention here are important because they represent the group-think, the cultural hegemony of the entire Western establishment. They see evil amongst those who quite naturally, morally and ethically wish to survive as a race and culture, and they see only virtue and celebratory diversity in those who wish to destroy us. They refuse to recognise the real problem despite the problem being explicitly codified in a book freely available to purchase and study and they disingenuously invent the scenario of murderous “right-wing” politics where today (for the moment at least) there is none.

And the worst thing here is that if the establishment has adopted an ideology which threatens us (maybe not oldies like me, but certainly the young and yet to be born) quite literally in terms of life and death and national survival, then there will be, there can only be, any number of genuine political assassinations in the future.

What is at stake all across the West is far more important than the issues which historically spawned terrorist organisations such as the IRA. Fighting for your national survival — your very survival — is far more important than fighting for mere independence. As such, I have no doubt extreme organisations will spring up over the coming years and I have no doubt they will target the politicians who through malice, fear or ignorance have placed themselves on the side of evil against good, of destruction against survival, of them against us.

I hope democracy will avail itself before this dystopian scenario unfolds. In some Western countries there are glimmers of hope that politics will solve the single biggest issue of the 21st century. Holland, France, Germany, Sweden are all close (ish) to electing politicians who wish their countries to peacefully survive. Britain is not even close, though. Which is why I predict Britain will be the main country to witness the political assassination of members of its traitor class. And it will be entirely the fault of the Left.