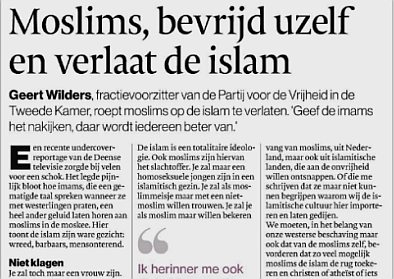 The following article by Geert Wilders, the leader of the Party for Freedom (Partij voor de Vrijheid, PVV) in the Netherlands, has been translated from the Dutch. It was originally published in the Algemeen Dagblad, one of the largest dailies in The Netherlands:

Muslims, Free Yourselves and Leave Islam!

Many people have been shocked by a recent undercover documentary on Danish television. It revealed how imams, speaking a moderate language when talking to Westerners, have a quite different message for Muslims in the mosque. There, Islam shows its true face: Cruel, barbaric, inhumane.

Just imagine you’re a woman. Danish television showed how a woman, who was complaining to the imam that she was being abused by her husband, was told not go to the police. According to Islam, women are not to complain when they’re beaten up by their husbands, unfaithful wives should be stoned, homosexuals should be thrown from buildings, apostates and infidels deserve death, and democracy must be subordinate to Islamic Sharia law. That’s all being proclaimed. Not just in Denmark. But also here, in our own country, in the Netherlands, in the year 2016, as will soon be confirmed, according to a newspaper, by a study conducted by Tilburg University.

I traveled the Islamic world extensively when it was still possible for me to do so. I have met many friendly, hospitable and helpful Muslims there. But I also vividly remember the oppressive Islamic culture of fear, oppression and apathy. I’m still reminded of this whenever I receive emails from Muslims, from the Netherlands, but also from Islamic countries, who want to escape the lack of freedom. Or who write to me saying they don’t understand why we are importing the Islamic culture to our own country and allowing it to thrive here.

“Apostates” are, in fact, people who choose freedom; they deserve encouragement. Because the more Islamic apostates there are, the less misogyny, the less hatred of gays, the less anti-Semitism, the less oppression, the less terror and violence, and the more freedom there will be. Everyone will benefit from this. Ex-Muslims as well as ourselves.

Hence, our message should be very clear: Muslims, leave Islam, opt for freedom, turn your backs on the imams. Free yourself.

61 thoughts on “Geert Wilders: Muslims, Free Yourselves and Leave Islam!”