Our Israeli correspondent MC sends this exploration of the spiritual (or anti-spiritual) qualities shared by Islam, Communism, secular humanism, and the worshippers of Moloch. 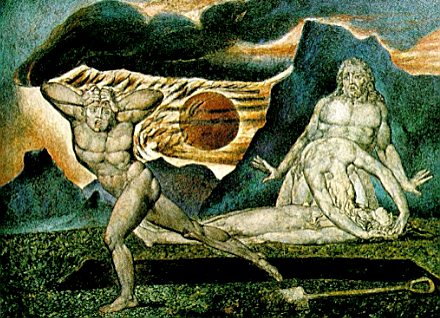 A few weeks ago France, and to a certain extent the whole of Europe, faced what Israel faces on a daily basis: Islamo-hatred. Islam is not a religion of peace; it is not even a religion in the way that we understand the idea of a religion in the West. What it is, is a political hybrid, a totalitarian death-cult, intent on world domination.

That said, Israel’s war is not really about Islam. It is much more about secular humanism, where the innate violence of Islam is a side-issue in a nasty and vicious war between the forces of secular humanism and those of Decalogue (Ten Commandments) centered life.

Judaism acknowledges God as the creator, and the Torah as handbook for life on earth, but within that handbook is the illustration of a conflict between Cain and Abel. Abel followed the Creator’s instructions and was therefore in alignment with Creation, Cain did things his own way and came into conflict with Creation, but rather than acknowledge that he got it wrong, he made a fatal ‘ad hominem’ attack on Abel and went and built a city with walls around it to keep God out.

Political religions, such as Cain’s, tend to deify a human leader with a vision, the balance between the leader and the vision being somewhat fluid. Islam falls into the latter group, but a moribund leader/god figurehead has rendered the movement static — set in a Kaaba stone, one might say.

At the centre of the argument is the conflict of ideas about human sacrifice and the sanctity of human life. Communism in France (the French revolution) and Russia brought us a new concept in human sacrifice: mass murder as a form of secular expiation of ‘class’ guilt (which has recently evolved into ‘race’ guilt).

Islam, too, places no value on the sanctity of human life. Indeed, it glorifies ‘martyrdom’, which it idolizes as death whilst fighting the infidel (indulging in Jihad). Allah cannot abide unbelievers, and so to achieve an Islamic utopia, all unbelievers must be eliminated in the name of Allah, or rendered subordinate.

Much of the terminology of Islam is open to interpretation. For ‘unbeliever’, one must read ‘someone who does not believe my particular brand of sectarian belief’. Thus the sentence for having a difference of opinion is death.

The religions of secular humanism bring us a cross section of flexible belief, too, a belief where definitions of words lose precision depending upon religious whim. Abortion, especially ‘late’ abortion, involves the taking of human life, but in the case of the unborn child, this is not murder because the secular human religion deems an unborn child as still part of its mother, with a status no greater than that of a cancer tumour. Whilst this may be repugnant to many, it is understandable. However, what is morally screwy is that an aborted fetus, once outside of the mother is deemed to be dead, even if still alive, and although ‘dead’; is also garbage to be disposed of at the whim (or profit) of the aborter.

Cain believes that his way is best, and takes action to assert his beliefs to those around him. In doing so he kills Abel. He then denies the crime: “Am I my brother’s keeper?”. He then sets up his own community based upon his own distrust of Creation and Creator, and builds a wall around it. So, instead of trusting and relying on God, he trusts and relies on himself. He thus works out his future according to Adam’s knowledge of good and evil (arbitrary) rather the God’s Knowledge of Good and Evil (Torah).

Islam worships a desert brigand who took Cain’s secular humanism a step further and invented his own god, albeit borrowing and adapting from the existing Arabian pantheon. By this device he created a regime predicated on the base animal instincts of humanity, and which he could control by manipulating his invented god, of which he alone was the mouthpiece. Islam is not a religion as such, but like Communism, an endeavor of human creativity designed to replace Judeo-Christianity with a type of feudal elitism. In Communism the elite comprises self-defined ‘intellectuals’ who ruthlessly vie for political supremacy, but in Islam, the rulers are those whose ruthlessness and violence overcomes all others in a dog-eat-dog melee. There is not much difference between the two.

Thus, in any secular humanist regime, once the leadership dispute is settled, the ruling faction can get down to the real job of human sacrifice.

Moderate Islam/Communism is the state where there is still a leadership dispute and where, therefore, the cull has not yet started. The symptom of this state is increasing ‘political correctness’, or in the case of Islam, creeping sharia in the target societies. The regimes inveigle their way into society by shifting the Decalogue-based law away from its roots in the Bible and towards the accepted law of the regime. This weakens and divides the target society and so promotes the regimista who are eventually able to strike hard and seize absolute control (and with it rights over life and death).

Western societies are uniquely vulnerable to this infiltration and dilution. They have a tangible superiority which presents a magnificent prize, and much booty, for those who can successfully exploit it. These are settled societies where the “living is easy”, so much so that the victims are singularly unaware of the precarious nature of their bounty. Indeed, many do not even realize that they have a bounty worth protecting.

In a tolerant society where human life is deemed precious, infiltration is very difficult to control, there is just no adequate deterrent when one is not allowed to deport or execute the enemy.

We have many examples of Decalogue-based societies being undermined and destroyed. One might feature Haiti or Zimbabwe, for example, and then start to catalogue the starvation, murder and mayhem following in the wake of the revolution. These are examples of humans being sacrificed to the gods of ‘racism’, and whilst the slave revolt (in the case of Haiti) might have had some justification, the subsequent massacres of mixed race folk (or the Matabele in Zim) was a gross human sacrifice.

The Koran demands that Allah must be appeased by dismemberment, by burning alive and by the beheading of unbelievers and apostates. Communists and National Socialists sacrificed millions in labour camps, working their victims to death as a homage to Moloch.

Are we going to let this happen to our loved ones?

As a society, we tend to comfort ourselves with words. We do not call these things ‘human sacrifice’ because we tend to think in terms of today’s culture and not in terms of ancient history. We think we have evolved; we think that we are enlightened; but no, we are just deceived. Cain is still killing Abel; it is only the names that have changed.

For a few hundred years our Western society embraced biblical values, and civilization advanced rapidly. Then, like Cain, we too thought we could do better on our own, and we started to revert to Cain’s society and rules: “I did it my way”. I see little difference between the Tophet and Planned Parenthood, but that is just me, I suppose.

Our coveted Western civilization is both fragile and relatively new. World history shows us that the norm of society is both brutal and chaotic, and that life is cheap and short and extremely violent. Europe came kicking and screaming into an enlightenment, and it was for this reason that the Founding Fathers treated ‘government’ with such suspicion. Thus they embedded the idea of the biblical code of ethics into the very definition of American society. American society was intended to be a society of Abels, but the Cains have ever been ready to confound it. The pen and the telephone may yet prove to be a viable weapons of choice to sacrifice Abel once more.