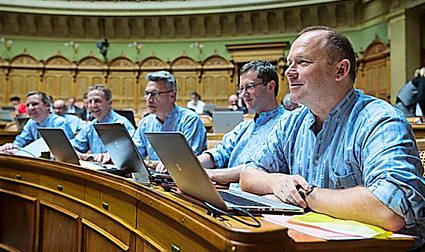 Multicultural Political Correctness has infected a school in a town near Zurich. It seems any evidence that a student is proud of being Swiss is now verboten, and must be suppressed.

Many thanks to Nash Montana for translating this article from Junge Freiheit:

GOSSAU. A Swiss teacher prohibited her students from wearing Edelweiss shirts, because she says they are racist. Around ten teenagers at the Gossau high school were wearing the shirts to show that they were “proud and patriotic Swiss”. The teacher ordered the students to immediately change their clothes.

The Swiss People’s Party (SVP) was appalled over this ordinance; they called it “mega-temerity”. It is “questionable, that Swiss traditions are now labeled as racist and are even banned,” said party Member Lukas Reimann (SVP). He noticed that especially Albanian youths everywhere “show their eagle”. That right should go for everybody.

Claudio Schmid @claudio_schmid
We Swiss are abolishing ourselves and it looks as if schools and courts are helping.
Permitted: Hijab
Not permitted: @EdelweissShirt

Many Swiss Canton councilmen were wearing their Edelweiss shirts out of protest at the last Parliament session.

The students who wore the shirts were invited by the school for a discussion, and they were asked to justify their behavior. But later the school principal admitted the teacher had overreacted with the ban, and she has realized that herself. Apparently, the driving force behind all this is rising tensions between students from the Balkans and indigenous students at the school.

Gossau, the town where this happened, is a hop and a skip away from where I went to school in Wetzikon, four kilometers away. This is the Canton of Zurich we are talking about. Actually, it’s called “Zurich Upperland”, because it is north/east of the city of Zurich towards more alpine, mountainous regions. Zurich Upperland used to be amazingly magical, with mysterious valleys, hollers and roads leading you uphill at almost 60-degree angles.

The region has in the past largely depended on traditional Italian immigration, and the towns could easily be mistaken for small Italian towns sometimes. But in the past fifteen years or so, the immigration of Balkan and Middle Eastern and even African people has completely changed the landscape. What once was a cute little Swiss town such as Gossau is now a devil’s armpit.

Sure, on the outside it all still looks fine and well, but you can’t leave anything unlocked, you can’t let your dog sit outside the grocery store (they get stolen and killed) to wait for you, you can’t ride your horse undisturbed anymore (they are afraid of horses and will yell at you and throw rocks at the horse), and most children are now brought back and forth to school by car, even though walking would often only take five to ten minutes while driving will take up to twenty minutes. But when your little kids get harassed by Balkan Boyz on the way home… it’s the only option. Unless you’re itching for a fight, of course.

Traffic is insane, people are unfriendly, and foreigners wherever you look. These Zurich Upperland towns are now nothing more than foreign pest holes. They are dirty, filthy, unfamiliar, and have become anonymous. It’s the reason I left my hometown Wetzikon again last March and came back to the USA.

39 thoughts on “Edelweiss is Racist!”