A newsletter from the Christian Action Network arrived in my email today. My bias here: I have a soft spot for CAN since much of the Baron’s early investigative work into Jamaat ul-Fuqra was seconded and significantly expanded to a national level by Marty Mawyer, whose work is funded by CAN. As the Baron says admiringly, Marty had ummm… manly junk “composed of steel”. Marty went right into those compounds like Daniel into the lion’s den, admitting later that it was scary at times — like when they boxed him in.

Much of the CAN newsletter follows my own thoughts about the situation of “Syrian” “refugees” and also the ugly slams I see on Twitter occasionally. Their petition is on Facebook, a much rougher neighborhood.

But many of you know and experience what Marty talks about: the amount of UGHly that emerges when any contrary opinions are aired about this very charged issue of “Syrian” “refugees”. These Alinsky disciples are so deeply indoctrinated they’re unable to entertain the idea that there could be more to an issue than what they so firmly feel about it.

CAN points out the pieces of this burning issue being flung at them because of their attempt to petition the governor regarding what Obama wants: 10,000+ “refugees”, in actuality more like a hundred thousand before the end of his term. Should he succeed, it will be another of Obama’s disastrous “signature accomplishments” in his stated goal of “radically transforming America”. [Wait until you see the impoverishment planned in his take-down of the fossil fuel industries. What is particularly cruel is the ways in which it will devastate the working poor.]

What is obvious is that CAN is among the favorite targets of people who already loathe religion, Christianity in particular, and love “immigrants” of whatever stripe, though they don’t know any. The fact that they have such little information about the objects of their hatreds doesn’t stop them from having lots of opinions about us anyway.

I’ve made no secret of my Christian beliefs and the ways in which they inform my thinking about what constitutes moral behavior, or about the need to develop a mature discernment regarding the proper response to various media bombardments. Beyond those few areas, any conversation about “faith” is between me and The Whomever.

In this case — the “thinking” of those as moved by pictures of homeless puppies as they are by big-eyed children from somewhere far away from themselves — needs closer examination. When they want to paint our reservations as selfishness I’ve pointed out my favorite parable about wise ways to help needy strangers. Perhaps our readers (whatever their own beliefs) will find this example from the book of Luke also helpful (but only in those cases when an anti-religious rant has been delivered. One has to stay within the categories they propose as weapons to use against you).

Only Luke’s Gospel contains the parable; this version is from the Children’s Bible because I like the language — direct without being condescending: 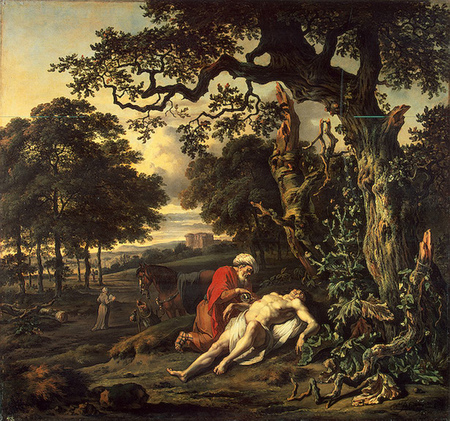 The Parable of the Good Samaritan

On one occasion an expert in the law stood up to test Jesus.

“Teacher,” he asked, “what must I do to inherit eternal life?”

“You have answered correctly,” Jesus replied. “Do this and you will live.”

But he wanted to justify himself, so he asked Jesus, “And who is my neighbor?”

In reply Jesus said: “A man was going down from Jerusalem to Jericho, when he was attacked by robbers. They stripped him of his clothes, beat him and went away, leaving him half dead. A priest happened to be going down the same road, and when he saw the man, he passed by on the other side. So too, a Levite, when he came to the place and saw him, passed by on the other side. But a Samaritan, as he traveled, came where the man was; and when he saw him, he took pity on him. He went to him and bandaged his wounds, pouring on oil and wine. Then he put the man on his own donkey, brought him to an inn and took care of him. The next day he took out two denarii and gave them to the innkeeper. ‘Look after him,’ he said, ‘and when I return, I will reimburse you for any extra expense you may have.’

“Which of these three do you think was a neighbor to the man who fell into the hands of robbers?”

The expert in the law replied, “The one who had mercy on him.”

Jesus told him, “Go and do likewise.”

Notice the behavior of the Good Samaritan: he didn’t take the fellow from the side of the road home with him. He didn’t expect his children to have to attend school with the robbery victim’s kids. No taxes were removed from his purse for other robbery victims. It was all hands-on help, limited to practical solutions for the immediate exigency.

Notice also the characters Jesus chose as the dramatis personae in his tale:

Now the message from CAN. Their effort may be quixotic at this point, given that our Virginia governor is a full-fledged Obama disciple. He doesn’t have to listen to anyone because Virginia governors are limited to one term. And his future help in politics — e.g., a distant presidential campaign — shall come from the Democrats National Committee. It is their directives that shall be his desires.

Meanwhile the wishes of the people he was elected to serve figure not a whit in Mr. McAuliffe’s calculations. He’s a politician first, and a public servant second — or perhaps not a public servant at all. It’s becoming ever more difficult to find a pol who is not a self-serving narcissist. This is not necessarily a bad thing; it’s only when that is the sum total of his character that citizens are in trouble.

A statement from Christian Action Network

Let us share a trend from Christian Action Network’s Facebook page, where supporters “Like” the things we do and haters bombard us with profanity and/or insults.

When we announced our recent petition drive to keep Virginia Gov. Terry McAuliffe from settling Syrian refugees in our home state (it’s still open; sign it here), the negative reactions all had a similar tone: that we are “unchristian” for opposing a huge, hasty and very political importation of strangers into our midst from a region known for terrorism and extremist violence.

Here are some choice examples:

You get the idea. We don’t practice what we preach. We are hypocrites.

Because Christian people strive to be self-aware and mindful of their own sins, that really hurts. On its face, it seems so true! The president of the United States himself even needles us with it, accusing us in public of being unwilling to help suffering women and children.

What is the correct answer to this charge, such a key part of the left’s — and thus our current government’s — war on people of faith? What is the answer when we’re similarly thrashed for opposing food stamps, mortgage forgiveness, “free” housing, “free” health care, “free” mobile phones — all the wealth redistribution tricks leftists use to buy votes?

The first is charity. The second is theft.

This is the essence of the left’s slimy and dishonest sleight-of-hand [slams against] productive and religious people. They confiscate people’s work and money via government regulations, then hand it out from a high place as if it were their own, all the while characterizing themselves as the most charitable people on Earth, or as noble social-justice warriors like Robin Hood.

Us? We are of course selfish, ugly hypocrites, and angry to boot.

To help people who are still in Syria, or to commit a random act of charity that isn’t managed by the government, consider International Orthodox Christian Charities (click), to whom CAN makes donations.

What we are angry about is being stolen from, and then seeing our stolen property used to paint us as stingy and mean. It’s adding insult to injury, this system of them providing all the wisdom and good intentions, while we provide the actual wealth and shoulder all the risks.

In the case of refugees from Syria — or those from Central and South America, who continue to pour over our borders — we are seeing our property, our security, and our children’s future handed over willy-nilly to strangers.

Yes, many of them are strangers in need. Given the chance, we would be delighted to help them. Christians (and Americans at large) are in fact the most charitable people on Earth.

But let Americans make the call. Let us decide the who, when, why, how much and the conditions of our charity (because charity need not be unconditional. In fact it is a great way to teach and lead).

If we need to take care of our own veterans first, let us.

If we want to take care of our own elderly first, instead of continuing to spend all the money they thought they were stashing safely in Social Security, let us.

And the next time a leftist accuses you of being a false Christian, ask for one of their blank checks, with the account number clearly legible. Right now. Or ask for their credit cards, or for a set of keys to their home.

Because you can think of a lot of people who really need their stuff.

Go here to donate to the International Orthodox Christian Charities. They help people in Syria but also many other places in need.

14 thoughts on “Is It “Unchristian” To Refuse Syrian Refugees?”