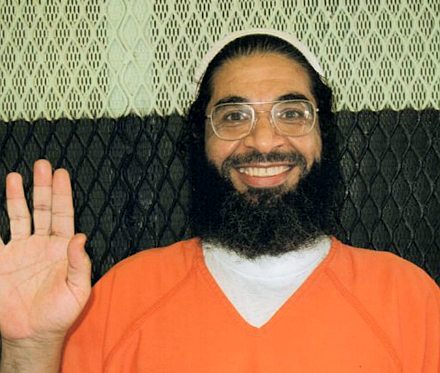 Rejoice! Rejoice and let peal the church bells! An innocent British man who suffered years of imperialist injustice has finally been freed! He is due to land any second now at Biggin Hill Airport, just outside London. The massed media eagerly awaits the puff of tyre smoke as the private jet carrying Mr Shaker Aamer lines up for the runway once used by Spitfires and Hurricanes during a very different time, indeed during a very different civilisation. Cute little flopsies from the BBC with tears of joy running down their concave cheeks are already breathlessly informing us of the beatings and torture this poor British man had to endure at the hands of those beastly Americans and their running-dog-lackeys-in-crime within the British establishment. Justice! Finally justice, for this poor innocent victim of Western aggression!

But it’s not really like that at all, despite the BBC’s wishing for it — praying for it — to be true. For a start, good old Shakey Aamer is not even British; he is a citizen of Saudi Arabia, not Britain and is only described as British because he is married to a woman in possession of a British passport. This gushing fanfare for a Saudi Arabian with a possible jihadist past is all a little odd, I find, although I do appreciate my dreadful view isn’t shared by the English media, nor by the legions of human rights lawyers already flipping through brochures depicting shiny new BMW’s and exotic holidays abroad.

I suppose it is just possible the man is innocent, although this does seem to be rather improbable. After all, if you were a normal, law-abiding citizen living in England in the summer of 2001 would it, in all honesty, occur to you to give up your job, ignore your lawn which now needs mowing at least once a week and toddle off to an Afghan war zone with your wife and nippers in tow? I must confess that although 2001 is quite some time ago, the thought never occurred to me, as far as I can recollect…. but then again, perhaps I am just a little odd and Mr Aamer is made of saner stuff.

Shakey and the family only stayed in Afghanistan for a couple of months. When the U.S. started its bombing campaign in October 2001 he took his wife and children to Pakistan before returning to do some sort of charity work in Afghanistan, as is the usual way of life for Brits abroad. The BBC doesn’t seem terribly keen on establishing which particular Islamic charity Shakey was helping out, although we can be reasonably sure it was something along the lines of aiding photogenic Afghan children orphaned or maimed by explosive devices indiscriminately lobbed in their direction by wicked, infidel Uncle Sam.

There is no evidence of Aamer ever working for an Afghan charity (perhaps the BBC will utilise one of its impartial investigative reporters to find out which charity it was…) but the self-sacrificing and well intentioned Saudi had indeed worked for Islamic charities during the 1990s — which turned out to be, surprise, surprise, front organisations involved in raising money for Al-Qaeda. One was called the “Revival of Islamic Heritage Society” which was placed on the Al-Qaeda sanctions register by the United Nation’s Security Council in 2002. Silly old Shakey! How could he have muddled up his building-homes-for-orphans ambition and ended up supporting a terrorist organisation instead?

Another unusual aspect about Mr Aamer is that when taken prisoner in December 2002 by Afghan forces in Jalalabad, he was carrying a Belgian passport which can only be described as a somewhat strange possession for a Saudi Arabian citizen married to a British wife then residing in Pakistan. There are so many peculiarities about this entire case, some of which are highlighted in a report by Douglas Murray’s Henry Jackson Society which I would encourage everyone to read if they want some detailed information unavailable to those who rely solely on the BBC for their propaganda… sorry, I meant “news”.

The report may or may not be entirely accurate, but it does seem to suggest that Mr Shaker Aamer was very much a trained jihadist with links to the Taliban, al-Qaeda and Osama bin Laden; that he was a military commander held in awe by fellow jihadists; that he fought in Bosnia during the 1990s and that his circle of accomplices seems to revolve around jihadists, extremists and terrorists all around the world. As I say, please read the report and then wonder why nothing, NOTHING about this overwhelming evidence (allegedly….yawn) is being raised by the BBC or indeed any other branch of our mainstream media in Britain.

A Daily Telegraph article states Mr Aamer should have been released in 2007 after being cleared by President Bush. So why wasn’t he? The Telegraph doesn’t go into this of course, but the reason is simple. He was cleared for release in Saudi Arabia but Mr Aamer did not wish to go to Saudi Arabia… for a very good reason. As one TV reporter intimated, it is a very difficult situation regarding these people. Letting them free in the West presents dangers for us, whilst returning them to their own countries presents human rights issues regarding their immediate imprisonment upon arrival, followed by possible torture due to their terrorist activities in the past…

As I write this, I am watching the news in utter bemusement as the BBC gently interviews Cage director Moazzam Begg about the injustices suffered by Shaker Aamer. Cage, incidentally, is the “Human Rights” organisation which defended to the hilt Mohammed Emwazi, otherwise known as Jihadi John, ISIL’s beheader-in-chief-of-British-citizens, torturer, crucifier and pilot burner. And the BBC treat the admirer of such a man with kid gloves! Everything he says must be true with regard to the alleged abuse meted out to Shakey by American spooks! How could such a decent, moral, humane man possibly lie to us?!

Oh Lord, how these Islamists are laughing at us! They must find it hard to believe what unquestioning dupes we are. Can it really be this simple they are asking themselves as they roll around the floor clutching their sides. Will the media really not ask us just one embarrassing question out of the many they could ask? If we can get away with this, we can get away with anything, they must be thinking! The spineless Brits seem to have given up already! We won’t even have to fight them in the future in order to take over! Insh’allah!

And as we roll out the red carpet for a man who could well have been waging war against us — and who is now in line for one million pounds of compensation — the wife of Royal Marine Sergeant Alexander Blackman, a man jailed for defending his country, continues to fight for justice. I don’t think she will find any justice though, nor a large sum of money in compensation. Sgt Blackman is English, possibly even a Christian — and a soldier to boot. This combination makes him a decidedly unfashionable person in terms of human rights lawyers or sympathetic BBC coverage. Far better to be old Shakey Aamer in today’s Britain. As I say, how they must be laughing at us.

28 thoughts on “Shaker Aamer — Genuine Jihadist or an Innocent Abroad?”