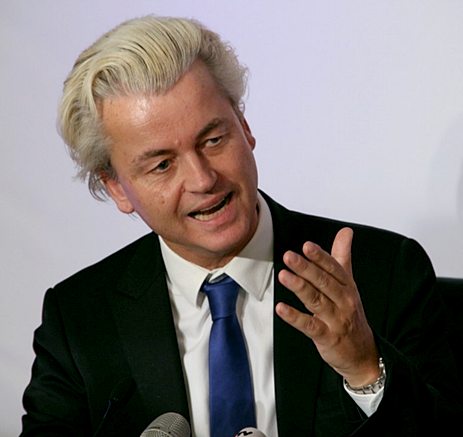 Geert Wilders, the leader of the Party for Freedom (Partij voor de Vrijheid, PVV) in the Netherlands visited Vienna a week ago to meet with Heinz-Christian Strache, his counterpart in the Austrian Freedom Party (Freiheitliche Partei Österreichs, FPÖ). While he was there Mr. Wilders held a press conference and gave a rousing speech against Islamization to a large audience.

The first of the expected “lawfare” repercussions has now struck the Dutch politician: a leader of a Muslim organization wants the public prosecutor to file charges against Mr. Wilders for denigrating Islam.

The following article was published by ORF (Österreichischer Rundfunk, the Austrian public broadcaster) a few days ago. Many thanks to JLH for the translation:

During his visit to Vienna, the Netherlander Geert Wilders compared the Koran with Hitler’s Mein Kampf. A Muslim organization notified the Vienna prosecutor’s office.

The speech given last week in the Hofburg at the invitation of the FPÖ by the Dutch politician, which set forth his thoughts on the “Islamization of Europe,” will be examined by the public prosecutor. Tarafa Baghajati[1] is the head of the Austrian Muslim Initiative[2] (IMÖ) — the organization that sent the notification to the prosecutor on Tuesday.

It is legitimate, said Baghajati to religion.ORF.at., to examine whether content of the speech is illegal. Specifically, it concerns the persecution paragraphs on denigration of religious doctrine and the prohibition statute. According to media reports, Wilders had maintained in his speech that Islam had declared war on Europe, and was urging people to become terrorists and that the Koran had to be forbidden.

Such speeches being given in a location with the symbolic significance of the Hofburg,[3] said Baghajati, is harmful to Austria’s reputation. The FPÖ, and especially its chief Heinz-Christian Strache, were constantly emphasizing that they are not against Islam and Muslims, but against the abuse of Islam and against extremists, said Baghajati.

However, said the head of the IMÖ, the fact that the FPÖ invited a politician who makes no distinction between Islam and the abuse of Islam, and even compares the Koran with Mein Kampf, shows where the FPÖ really stands. It will be up to the prosecutor’s office to decide whether the comparison should be seen as a whitewash of Nazism.

“We are afraid that hostility to Islam is becoming more and more a political program for right-oriented parties,” said Baghajati. Incipient Islam-hostile tendencies are also showing up in the mainstream, says the IMÖ head.

The generalized suspicion directed toward Islam and Muslims, he says, is growing increasingly stronger in the society as a whole. Against this background, speeches like Wilders’ are dangerous for “the cohesion of all society and not just for Muslims.” As with the general social problem of racism, countering it is not just the business of those affected, but of everyone — politicians, media, intellectuals and civil society. They must all be vigilant.

The organization, Austrian Muslim Initiative, was founded in 1999 and strives for to the social participation of Muslims in the general welfare.

Among other goals named on the organization’s website is “civic engagement in the area of anti-racism.”

15 thoughts on “Yes to Social Cohesion in Austria! No to Geert Wilders!”