Below is a report from Vienna on yesterday’s visit by Geert Wilders of the Dutch Party for Freedom to Heinz-Christian Strache of the Austrian Freedom Party. 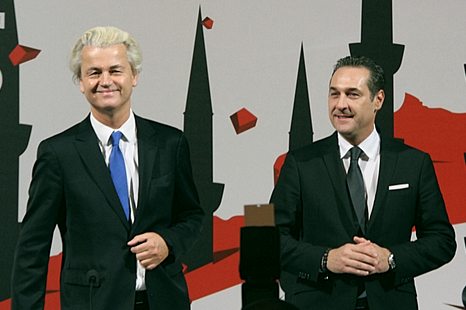 Geert Wilders at the Gates of Vienna
Part 4

by the Counterjihad Collective

Geert Wilders’ whirlwind visit to Vienna yesterday was action-packed from the very morning. A massive power failure in the Netherlands almost prevented him from coming, but after a slight delay, he arrived to the ornate Austrian parliament under heavy police protection, as planned.

For ten long and lonely years, Geert has been fighting to preserve the values of his country, The Netherlands. He has been vilified and demonized, denounced endlessly, but he battles on regardless. The constant death threats on his life necessitate round-the-clock security.

Inside the Austrian parliament, Wilders first had a private talk with his friend and ally Heinz-Christian Strache, chairman of the Austrian Freedom Party (Freiheitliche Partei Österreichs, FPÖ). They then hosted a joint press conference under the title “Islamization: The threat to Europe”, which drew heavy press attention from the press. Wilders’ statement at the press conference (in English) can be viewed here.

After further media interviews, Wilders proceeded to the imperial castle Hofburg, where he spoke for half an hour to a room full to the last chair (and more), with over 1,000 participants.

In his speech (held in German — the full English text has been posted here), Wilders stressed that the threat of Islamization is by no means being stopped by ostrich-like tactics of the leaders of the European Union, but is actually proceeding at a frightening pace. Wilders quoted statistics about the proliferation of Salafist Islamic organisations, about the number of Muslims supporting violence against non-Muslims, and the threat by the Islamic State to place large numbers of terrorists among asylum seekers entering Europe.

For these reasons and more, Geert Wilders demands that immigration from Islamic countries be halted immediately, that no more mosques should be built, and that we must take control of what is being taught in Islamic schools.

Islam cannot be reformed, he stressed, and for the simple reason that we cannot separate Islam from the Koran, neither can we take Muhammad out of Islam. Therefore there can never be a moderate Islam, Wilders said in his speech.

Wilders is steadfast that our Western culture, based on Christianity, Judaism and Humanism, is categorically superior to the Islamic culture. In the interest of everyone, immigrants should adopt our values, not the other way around.

In the current confrontation with the Islamic State and the problem of those wishing to leave their countries to join it, he has one thing to say: “Let them go, but never let them return.” Take away their passport and citizenship. Once these young people have been radicalized, no amount of intervention or counselling is going to change their minds. So rather bid them goodbye and good riddance, for the West is not their home.

His resistance against Islamization, mass immigration, lying media (Lügenpresse) and hostile EU elites cannot be left to politicians alone. Wilders emphasizes that preserving our liberties is a responsibility for every citizen because, as he says, “time is running out for the West.”

There is much work to be done. Because we are the defenders of freedom and security, we have an historic duty. Our generation has been entrusted with a huge task: to keep the flame of liberty burning and oppose the Islamization of our societies. He said without exaggeration that the future of human civilization depends on us. Now is the time when everyone in the West must do his duty.

5 thoughts on “Geert Wilders at the Gates of Vienna”