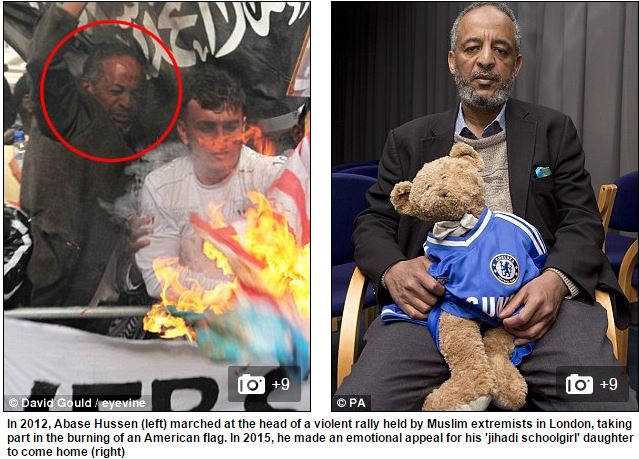 A few weeks three “British” schoolgirls made international headlines ago by traveling to Syria to join the Islamic State and wage jihad in the path of Allah.

One of the girls is named Amira Abase. Her father is Hussen Abase, although in some media accounts he is referred to as “Abase Hussen”, which is very confusing. In any case, after the news about his daughter broke, Mr. Abase or Mr. Hussen presented himself to the British media as a bewildered “moderate” Muslim who had no idea how his dear daughter had fallen in with a bad crowd and developed “extremist” views.

Below are excerpts from an account in The Guardian that was published on February 22:

The father of one of the London schoolgirls feared to be on her way to Syria has said her family “cannot stop crying” as he urged her not to fall into the clutches of Islamic State (Isis) militants.

As British counter-terrorism officers were accused of failing to pick up on signs that the teenagers may have been radicalised online, the father of Amira Abase, 15, said she had never discussed an interest in jihadism with him but “maybe with friends”.

Hussen Abase, 47, revealed that Amira had claimed she was going to a wedding on the day she went missing, but instead secretly met up with her Syria-bound friends.

In a tearful video message to his daughter, Abase said: “We are depressed, and it’s very stressful. The message we have for Amira is to get back home. We miss you. We cannot stop crying. Please think twice. Don’t go to Syria.”

Abase said Amira had been behaving “in a normal way” with “no sign to suspect her at all” before she disappeared.

“She said ‘Daddy, I’m in a hurry’,” he said. Later that morning, she texted her father, who assumed she was going to the wedding. “She said, ‘Dad, the place is a little bit far. I pray my midday prayer and I get back’. She didn’t come home,” he said. The family reported her missing at midnight on Tuesday.

Abase described his daughter’s actions as “completely nonsense” and said it had caused untold upset to her mother and younger brother and sister. He said his daughter had never spoken about an interest in jihad with him but “maybe with friends”.

“She doesn’t dare discuss something like this with us. She knows what the answer would be,” he said.

“If anyone doesn’t have hope, life would be miserable,” he said. “We don’t despair. We struggle. It’s stressful. We hope, of course.”

There’s no jihad in this family! Cross my heart and hope to die! Uh, no, wait, I mean… May Allah strike me dead if I fail to speak the truth!

Well, that was Hussen Abase in February 2015. It turns out that three years previously, in 2012, Mr. Abase-Hussen was somewhat more “radicalized” in his views. Is he perhaps a recovering jihadolic? He may even now on his way to a Mujahideen Anonymous meeting in the East London Mosque…

Vlad Tepes has compiled a “Then and Now” video of Hussen Abase. You’ve got to hand it to the grieving father; he certainly knows how to push all the lachrymose sentimentalist media buttons — look at the size of that teddy bear in his lap!

Here are excerpts from the most recent Daily Mail report on the tearful father of Amira:

His face twisted in fury, Abase Hussen punches his fist into the air and launches into an Islamic war cry.

‘Burn, burn USA,’ he yells from his prime spot at the front of one of the most notorious rallies in recent times [in 2012].

Once the crowd is whipped into a fever, an American flag is set on fire and held aloft by a fanatic. Video footage shows Mr Hussen desperately trying to hold the burning flag as the chanting behind him intensifies.

He manages to grab the flag briefly before being forced to drop it because of the power of the smoke and flames.

As the remainder of the flag burns on the ground, Mr Hussen chants ‘Allahu Akbar’.

He pushes the palm of his hand repeatedly toward the embers, rejoicing at the destruction of the stars and stripes.

Mr Hussen — the father of one of the three schoolgirls who fled Britain to join Islamic State — then turns his attention to a burning Israeli flag on the floor and begins to chant and gesture toward it.

He is one of a dozen fanatics standing behind a banner which proclaims: ‘The followers of Mohammed will conquer America.’ Behind him, hundreds of fanatics repeatedly chant incendiary slogans while holding menacing black jihadi flags.

Among the rabble-rousers was notorious hate preacher Anjem Choudary, who has led a number of Islamist groups that were subsequently banned.

Alongside him stood Michael Adebowale, one of the two Muslim converts who murdered and almost beheaded Fusilier Lee Rigby in the name of Allah eight months later.

But last month Mr Hussen gave evidence to Parliament refusing to accept any responsibility for the three schoolgirls’ actions, instead seeking to blame the police, teachers, Turkish officials and others.

In an extraordinary exchange at the home affairs select committee, Mr Hussen, who was with the families of the other two girls, denied even knowing what Islamic radicalisation was.

He said: ‘I strongly disagree with the letter being given to 15-year-old girls. The word “police” by itself and “terrorism” or “counter-terrorism”, as global issues — it is a heavy burden for a 15-year-old to deal with that. We also feel that we are neglected as parents.
[…]

What the MPs were not told was that Mr Hussen was caught on camera in one of a wave of demonstrations that took place across the world in September 2012.

Thousands had taken to the streets to protest against an obscure film called Innocence of Muslims, criticised for ridiculing Islam.

Last night members of the Commons committee expressed their shock and astonishment over Mr Hussen’s activities.

Labour MP Ian Austin said: ‘It is extraordinary that this man blamed the police, the Government, the school, the Turkish government and everyone else for his daughter’s decision to go to Syria but failed to mention his own involvement in an appalling Islamist rally. Perhaps the committee should invite Mr Hussen back so he can explain what he was doing.’

I can’t wait to hear his explanation. Maybe he’ll bring his teddy bear with him when he testifies.