Note: This post was a “sticky” feature for 24 hours. Scroll down for a video of the Norwegian Foreign Minister being caught lying about his contacts with Hamas, an investigative report about a university-funded MSA library in Montreal containing “extremist” literature, and last night’s news feed. 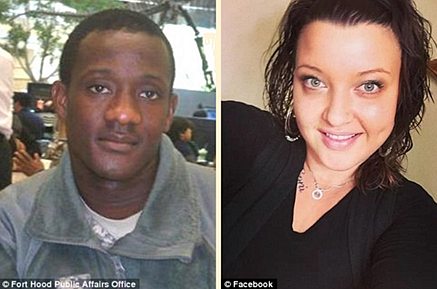 No, he wasn’t and they aren’t

“Fort Hood soldier ‘shot dead neighbors after wife fled to their house then dragged her back home and killed her then himself’” read one of the similar headlines on Feb. 24, 2015. The stories were mostly standard boilerplate too, asserting — here, again, in the Daily Mail’s version — that “Police in Killeen, Texas remain unsure why Atase Giffa killed his neighbors Sunday before killing his wife Dawn, 28.”

I think I know why, and it calls for lifting the other deception that obscures the why for the culturally-ignorant, the innocent, and the politically corrupt. This deception always originates in the Government-Media combine: here, for instance, evinced in the Associated Press packaged content:

“Fort Hood officials issued a statement Tuesday saying Atase Giffa was from Clarkston, Georgia and enlisted in 2009 as an automated logistics specialist. His wife, Dawn Giffa, was from Kingston, Ontario.”

But no, Giffa was not from Clarkston, Georgia. The name, the face of Atase Giffa bear the imprint of East Africa, most likely Ethiopia. The eyes are the sad, shocked, resentment-filled eyes of a refugee who has not only traveled thousands of miles to get to the United States, but several centuries as well.

And found out that traversing geographical distance is easy, but time-traveling to 21st century Western society is pretty much impossible — even if you are not a Muslim, in which case your coordinates on the time axis have to whoosh 1400 years forward in a matter of a year or two. Quite like another recent Fort Hood soldier, Major Nidal Malik Hasan, who could not traverse this space-time continuum, with lethal consequences for 13 Americans, and nearly so for another 32.

Moreover, just as Giffa is not from Clarkston, Georgia, Hasan is not from Arlington, Virginia, even though he was born there. The descendants of Martha Washington and Mary Custis and her husband, Robert E. Lee, are from Arlington. Hasan is on the space axis from 20th century Near Middle East and on the time axis from 7th century Saudi Arabia. It’s only the unalloyed Loonism and corruption of America’s ruling elite that, by importing his Palestinian parents, planted Hasan in Fort Hood on that fateful November 2009 day.

It gets worse. Arlington, where Hasan is not from, and Clarkston, where Giffa is not from, are not in Virginia and Georgia either but in that howling-mad vortex of quantum decoherence: an alternative reality multiverse conjured by mad Loons with the power to destroy.

Per the latest census — and this kind of data is always on the lowball side — 23% of Arlington residents are foreign-born and in 29% of households a language other than English is spoken at home. Arlington — via government, media, even corporate blurbs (e.g. Amazon) — proudly flaunts its public school children who “hail from 126 countries” and speak 98 languages.

That’s no way to run a country, or even a county. But even that pales in comparison to the quantum entanglement phenomenon that calls itself Clarkston, Georgia but is really Clarkston’s weird doppelganger situated on the dwarf star Uber Loonis 183/X.

“How would you like to walk out of your front door and share life, food, and stories with people from Colombia, Burma, Nepal, Iraq, Ethiopia and Sudan?” — asks just one of the “Christian” outfits feeding on America’s social capital and future prospects. “That is exactly what happens every day for people that come to serve with Global Frontier Missions in the Clarkston area of Atlanta, GA.”

Just so we understand that God is the CEO of this enterprise, GFM’s web page exhorts, “Stay engaged with what God is doing among the unreached.”

And “Friends of Refugees” — a Clarkston, GA outfit that has on its board a professor of theology at the “Christian” Indiana Wesleyan University, and a pastor of something that calls itself “Cell-ebration” — coos:

“During [the 1990′s], the population of Clarkston grew 34% as refugee families from over 150 different ethnic groups found a supportive urban environment for development and growth. Since this process began, some 60,000 refugees have begun their journeys as New Americans in this area. With so many ethnic groups represented within and around the city, Clarkston has been called ‘the most diverse square mile in America’ by the New York Times Magazine.”

Some other “Christian” lunacy calling itself Southeastern Synod ELCA “celebrates” some more in “The Ellis Island of the South”: Refugee Resettlement in Clarkston, GA. And they cite more self-appointed real-estate agents for Jesus that collaborate in this enterprise: Lutheran Services of Georgia that “partnered with the Clarkston Community Center and other local organizations for the Martin Lutheran King, Jr. Day of Service” and, if you poke some more, All Saints Lutheran Church and the Episcopal Church Of The Messiah.

This is just a tiny slice of a galloping tragicomedy in which glutton Leviathan on a quest to expand the ranks of its dependent serfs, the secular Left, and the seriously-believing “Christians” collaborate to disembowel and eviscerate the country of their ancestors and future descendants, while singing mad paeans to compassion, American values, Jesus, and what not.

A lone watchdog. Ann Corcoran’s “Refugee Resettlement Watch” tries, but can’t keep up with this avalanche. Corcoran wrote about Clarkston, its slide from a normal white suburb to a refugee-town of decay, poverty and suicide here.

Another excellent watchdog, Vdare.com, is bigger, more influential, and focuses on the entire Immigration racket rather than just its “refugee” scheme. Unfortunately, Vdare.com and the few otherwise laudable anti-immigration, anti-population replacement institutions travel with monomaniacal antisemites, ranging from Kevin McDonald & Disciples to Paul Fromm and worse. Therefore, while diagnosing the disease correctly, because of pandering to Jew hatred they misidentify its etiology and downplay the Muslim dimension of the pathology.

America’s tragedy is not its few Jews, influential though they are, their majority damaging and pathetic in supporting what’s worst not just for their country but for their own survival. The tragedy is not in the Left, either. The Left will always be there, always has been, like antimatter.

America’s tragedy are its “Christians”: its Bushes, its Huckabees, its Jimmy “Baptist Deacon” Carters, its Lyndon “Disciple of Christ” Johnsons, its “progressive” theologians, its Koran-teaching seminaries, its Jesus-the-Multiculti-Socialist peddlers who have no understanding either of the Bible or the Koran, either 1st century Jerusalem or 21st century Mogadishu. Until some sort of Second Reformation cleans up and resets this moldy mess, there won’t be an effective counterweight to the Nouveau Marxist juggernaut.

P.S. I have written before about the many cases of Third World immigrants, Muslim and not so, unable to adjust and exploding in a hail of bullets or machete swings against the lunatic Western society that transplanted them from their native soil.

And a few more facts about the status quo of America’s Christianity:

Takuan Seiyo is a European-born American writer living in exile in Japan. For links to his previous essays, see the Takuan Seiyo Archives.