Papa Whiskey is a long-time American reader and commenter here at Gates of Vienna. Below is his take on recent events in Paris. 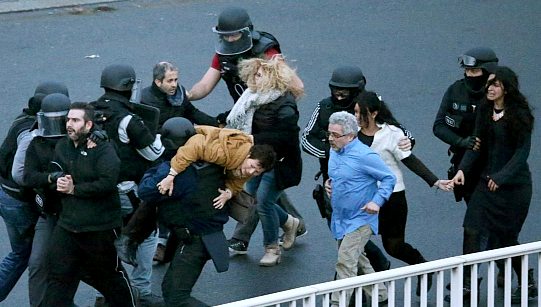 I am NOT Charlie — I’ll shoot back!
by Papa Whiskey

When the story of the furor over a Danish newspaper’s publication of a handful of drawings depicting Muhammad, Islam’s prophet, broke in early February of 2006, I was astounded. Riots? Death threats? Torched embassies? Over a few cartoons?

The mystery deepened when I actually saw the images on the Jihad Watch website. To one who remembered the era of American underground comics, they were really pretty tame stuff. The harshest of them showed a scowling Arab face wearing a round black turban with a burning fuse coming out of its top, to suggest one of the old-timey bombs thrown by anarchists a century ago. The others ranged from the cogent — an artist shown drawing a picture of Muhammad in the dead of night, sweating in terror — to the cryptic, with in-jokes only a Dane would get.

Their innocuous nature, however, didn’t keep the Muslim world from erupting in outrage. The paper, Jyllands-Posten, had commissioned the drawings in 2005 as part of an assessment of the extent to which self-censorship regarding Islam had permeated Denmark’s arts community, prompted by the difficulties encountered by an author who’d written a children’s book on the life of Muhammad and was trying to find an illustrator. Twenty-five artists were solicited for the project, of whom half made submissions. Their publication by Jyllands-Posten’s cultural editor Flemming Rose incensed the local Muslim community, which protested to the government. Tough, they were politely told. Danish law protects freedom of expression. Sorry ’bout that.

That should have been that, but the Muslims of Denmark decided to “internationalize” their protest. A delegation of imams took the cartoons to the Mideast — Egypt, Lebanon, and other countries — to gin up indignation at their publication. Their tour culminated in a December meeting at the annual convention of the Organization of the Islamic Conference in Cairo, where they were shown to the Egyptian foreign minister and other officials.

The “Cartoon Jihad” thus gathered momentum. Saudi Arabia and other Muslim countries instituted a boycott on Danish products, which soon disappeared from shelves across the region. By the end of January in 2006, demonstrations were being held at Danish embassies, and when European papers republished the cartoons as part of their coverage, the furor erupted worldwide. Danish embassies in Tehran and Damascus were set on fire by mobs, and a crowd of Muslims converged on the one in London with blood-curdling signs: “Behead those who insult Islam!” “Europe, you will pay! Your 9/11 is on its way!” and, with caustic candor, “Freedom go to hell!”

At the time I was a staff writer for the East Valley Tribune in Mesa, Arizona, and I set about composing an article on the uproar, which was the big story of the week, for the Sunday op-ed section. It seemed perfectly clear what the accompanying art ought to be: a selection of the cartoons themselves. They were central to the story, and their publication would show what all the fuss was about. Let readers see them and judge for themselves whether it was justified.

But there were two other elements to my agenda: clearly it was important for the journalists of the Tribune to show solidarity with those of Jyllands-Posten, and it was imperative to push back against a flagrant attack on not only the fundamental rights of journalists but on a core value of the Western world. I pitched the piece to my editors accordingly.

I thought it would be a no-brainer — but it wasn’t. What I got was a request from the Tribune’s executive editor to keep an eye on how many American papers were running the cartoons with their coverage and report that to him. Few did — in the end, only three major ones had the integrity to do so: the Philadelphia Inquirer, the Austin American-Statesman, and the now-defunct Rocky Mountain News of Denver. The rest demurred, usually offering weasel-words of justification for their pusillanimity.

And that decided my putative superiors, who ran with the pack. My piece appeared but with different art. I had to content myself with including the addresses of a couple of Websites where readers could see the Danish cartoons. I considering resigning in protest, as did three editors of the New York Observer who were similarly restricted. The furor continued and I wrote an update on it the next week, reporting also on the shameful performance of the U.S. press and concluding that our near-unanimous failure to print the Danish cartoons “had set a dreadful precedent, one certain to haunt us all in the years ahead.”

Seldom have I written anything so prescient, and seldom do I so fervently wish it hadn’t been. For today twelve people lie in a Paris morgue, shot to death by two French Muslims to avenge an “insult” to the founder of their odious creed by the Parisian satirical magazine Charlie Hebdo. The pair were armed with Kalashnikov assault rifles and operated with such precision that one witness mistook them for an elite counterterrorism squad. They wised him up by murdering a police officer before his eyes — Franck Brinsolaro, a state-provided bodyguard assigned to protect the publication’s editor Stephane “Charb” Charbonnier, who had been under threat from Muslims for years. Charlie Hebdo had been one of the magazines that had reprinted the Danish Muhammad cartoons in 2006, and its office had been firebombed in 2011. With his guard taken out, Charbonnier was quickly shot dead himself. The murder team then separated the men in the office from the women and began calling the names of those they intended to dispatch. One after another they were killed, to shouts of the Muslim war cry “Allahu akbar” (God is greater): the cartoonists Georges Wolinski, who worked under the pen name Wolinski; Jean “Cabu” Cabut; Bernard “Tignous” Verlhac; and Philippe Honore, known as Honore. The journalist, economist, and Charlie Hebdo shareholder Bernard Maris. Psychoanalyst and columnist Elsa Cayat, who wrote about relationships. Mustapha Ourrad, an Algerian-born copy editor. Michael Renaud, a visitor who’d been invited to attend the weekly editorial meeting. Frederic Boisseau, a building security guard at a reception desk. The last to die was Ahmed Merabet, an 11th Arrondissement police officer who tried to stop the fleeing murderers. After wounding him, one of them strode by him as he lay on the pavement and polished him off with a head shot as though swatting a fly.

The Charlie Hebdo massacre was the culmination of a years-long campaign of vituperation and attempted assassination by Muslims against Westerners with the temerity to mock their bullying faith or its piratical prophet. Kurt Westergaard, the Danish artist who had drawn the turban-bomb cartoon, has been the target of several assassination conspiracies and one actual attack at his home by a Somali immigrant. The Danish free-speech activist Lars Hedegaard, whose conviction on a “hate-speech” charge against Muslims was overturned by the Danish Supreme Court, was fired upon at his home in 2013 by an assailant posing as a mailman. A suspect was arrested in Turkey but released to the Islamic State the next year as part of a prisoner exchange. The Swedish artist Lars Vilks, whose drawings of Muhammad as a “roundabout dog” were pulled from an art show in 2007 but published in Swedish papers, was the target of two assassination plots in 2009 and one in 2011, as well as an assault by Muslims at a university lecture in 2010. The Islamic State has put a $150,000 price on Vilks’ head, and Charbonnier was just one of a dozen “most wanted” figures named in an Al-Qaeda poster in its propaganda organ Inspire.

Such aggression has had its desired effect. In April of 2006 Trey Parker and Matt Stone, creators of the popular Comedy Central TV cartoon show South Park, presented a two-part episode that satirized the uproar over the Danish cartoons but quite seriously addressed the issues at stake. In one scene of the program a cartoon image of Muhammad was intended to be shown — but Comedy Central executives insisted that it could not be. Parker and Stone therefore ran the show unchanged, but with the offending scene blacked out and calling attention to their bosses’ censorship. When this happened I wrote another op-ed piece on the affair, and this time I demanded that the Tribune print some of the Danish cartoons to accompany it or I would resign in protest. My editors refused and I did so that very day, yielding a paycheck I badly needed and work I dearly loved. I imagined that the action might have a positive effect on my profession, but it was like wetting one’s pants in a dark suit — it gave me a warm feeling but nobody noticed.

But if I was thwarted then, I am undaunted now — especially after the Paris atrocity. For in basely butchering journalists and artists for exercising their right to free expression the Muslim enemy has attacked me and my right to the same. And I have no intention of “feeling myself subdued,” a state to which verse 9:29 of the ignoble Qur’an commands its believers to reduce me through violence. I have written one suspense novel depicting Islam and its adherents in a critical but entirely accurate manner, having studied in the interim the scriptures, traditions, and history of that criminal creed and its false prophet, and am nearing completion of a second. They have not yet been published but I am confident they will be, and when they appear, the believers will see I have committed ghiba — “to mention anything concerning a person that he would dislike,” as elucidated in the classic manual of shari’a law entitled Umdat al-Salik.

You will not like what I have mentioned about you one bit, Muslims, any more than you liked what the artists of Jyllands-Posten and Charlie Hebdo had to say. But come at me the way you came at them and you will not find helpless Europeans but a very capable American, one who acquired his first .45 automatic forty years ago, achieved the U.S. Army “Expert” rating with it, has trained and practiced with it constantly ever since, and still carries it daily. Try conclusions with me, and it’ll be you that ends up in the morgue.