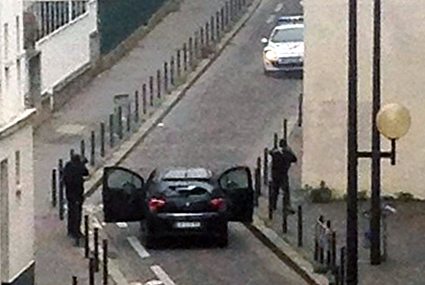 A Dream Imposed Before its Time Becomes a Nightmare

With a deeply saddening reference to the gruesome Charlie Hebdo massacre, the latest but by now quite routine Muslim atrocity, I find it extremely ironic that all online UK newspapers that accept comments below their outraged articles lauding freedom of speech are in fact ‘moderating’ the comments. I’ve already had two knocked back this morning, neither of which contained foul language or specific threats, but merely addressed the truth that dare not state its name.

To understand why this is so one only has to look at the track record of our vote-whoring, deconstructionist lawmakers in the Mother of Parliaments — and their counterparts throughout the West — and how they have gagged and suborned the Fourth Estate.

Essentially the Islamic invasion of the West is only a secondary threat to our freedom. It is an unanticipated by-product of that utopian pipe-dream, the great globalisation project. The purveyors of the latter have gleefully welcomed it and are now busy utilising it to achieve their own malignant ends.

Over several decades, by means of a carefully planned and orchestrated campaign whereby the young and the gullible of all ages have been infected with Pathological Altruism, that terminal Ebola of the mind, inculcated through the vectors of false cultural anthropomorphism and white guilt, they have carefully removed the goalposts of our democracy and established a wide open playing field upon which the Great Game must be played according to their rules — which are essentially any rules that they care to impose.

Now, with each passing day, they draw ever closer to achieving their objective through the clandestine encouragement of the Religion of Death and Slavery by establishing a protective shield around these cretinous barbarians as they subjugate us, the indigenous inhabitants, through a campaign of terror, intimidation and disinformation. The demonising and criminalisation of free speech is a minor but very important part of this process, for when freedom of speech has gone all other freedoms will follow. Thus are the deconstructionists close to establishing the desired socio-political environment wherein they can justify and thence implement their long planned unilateral seizure of absolute power via a ‘diversity’-indoctrinated and enriched Judiciary, Legal Apparatus and Police Service.

Thus it is that Islam can only be effectively (and easily) dealt with once the primary threat — our homegrown, ambitious and morally destitute global totalitarians — have been dealt with in their entirety.

However, the self-serving ambition of these avaricious traitors has until now blinded them to the reality that they are but drones on a mating flight they will not survive, irrespective of the outcome of the coming conflict, and that is going to be a very messy business indeed. Furthermore, there are indications that this fact is slowly dawning upon them, that the first frissons of fear are trickling down their crooked spines, and very soon they will have to try to save themselves by applying their only remaining option: cracking down with draconian ferocity upon those who are opposed to and actively resist the imposition of an Islamic Caliphate upon the West.

Hence it is no longer of any use for anybody to try to speak truth to power be it through the ballot box or otherwise. In the final analysis the only course of action left to each of us is Sauve qui peut — ‘Save himself who can’ (or ourselves collectively) by every and any means we can muster, without fear of what history may think of us, for if we do not we will have no history.

Understand this — those who should be our guides, our saviours, our protectors, together with their fellow travellers, sycophants and hopeful beneficiaries, are in fact the deadliest enemies of all free men and women.